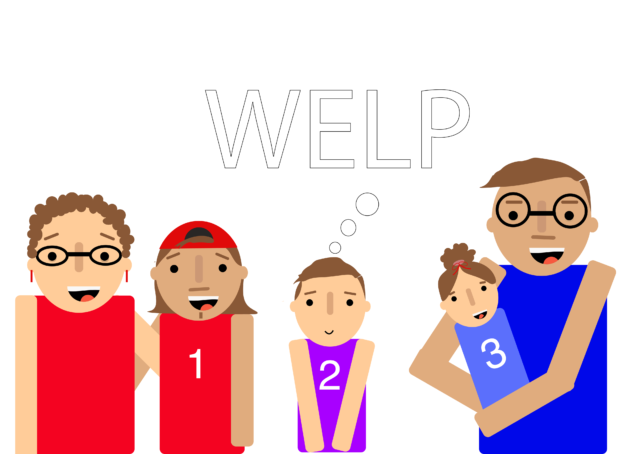 Many believe that Middle Child Syndrome is not a real thing. Some believe it’s just a term used to excuse the way some middle children act, while others will argue that it is indeed a real thing, and believe that birth order plays a huge role in one’s personality.

True or not, everyone can agree that whatever went down in your childhood and how you were treated will have lasting effects on how you choose to express yourself and act. Lived experiences contributes a lot to a person’s personality and beliefs.

“I feel like the feeling of Middle Child Syndrome is going to be mostly attributed to how your parents treated you,” says Faye Cayalo.

Faye and her husband, Ryan, are both middle children, and they’re expecting their third child soon. As they anticipate the arrival of their new addition to the family, they are also wondering how their youngest and soon-to-be middle child, will adjust to being a new big sister and taking on the middle child role. Two middle children, two different experiences, with a middle child of their own.

Personally, Faye didn’t go through the negative Middle Child Syndrome stereotypes of feeling ignored and pushed to the side. In fact, she felt suffocated with the amount of attention she got growing up! She is the only girl, with an older and younger brother. When her older brother was born, their dad was stationed in the Philippines. But by the time Faye was born, her dad was back in America. She believes this played a role in her getting attention. She felt as though her dad was trying to compensate for not being there for her older brother. On top of that, Faye was the only girl. She got all her parents’ attention growing up, and to this day it remains true.

For her husband Ryan, he had a totally different experience. He was the middle child with an older and younger sister. His parents got divorced when they were young, and this added to the feeling of being overlooked. In this instance, he was the only boy. And because he was the only boy, he felt as though he didn’t get as much attention.

The family dynamic plays a big role in everyone’s experience, not just for middle children. But these situations can help contribute or be the source of the feelings that Middle Child Syndrome brings. Especially when divorce happens. This was especially true for Gilbert Arcilla Jr.

Gilbert’s parents got divorced around the time when he was six years old. He has an older and young sister. Since the divorce happened when he was really young, Gilbert always felt like he had to grow up really fast.

Being the only boy meant that he had to “protect” his younger sisters. He felt as though being the only boy put him in a disadvantage for attention. People would ask how his sisters are doing and how they are feeling, but wouldn’t really think twice if he was okay. In his parents’ eyes, he was a boy and he was fine, he didn’t need to express his emotions or talk about how he was feeling. He had the protector role forced on him, he always found it difficult to express himself.

His older sister went through a phase of rebellion, soaking up all his parents’ attention and energy, while his little sister got the rest of the attention because she was the youngest. Gilbert craved the attention of his parents, but whatever attention he didn’t get, he got from his uncles, aunties, and friends. He found solace with his group of friends.

School was where Gilbert felt like he could be himself. He recalls being as young as eight, venting to his friends about his problems at home. But school is also where he became that “rebellious” middle child. He found himself getting in trouble at school. Teachers would scold him for disrupting class, not doing homework, and talking.

This is not an unusual characteristic for someone who feels ignored. Theresa Fernandez is a preschool teacher, and this May is expected to graduate San Francisco State with a B.A. in Child and Adolescent Development with an emphasis in Early Childhood.

“Children can act in various ways when they feel like they aren’t receiving enough attention,” Theresa explained. “One of the most common reactions that children will give off will be to “act out.”

Children catch on really fast and understand that when they do something wrong, adults will give them attention and tell them to stop. Children who seem to need it a lot more, will engage in doing the wrong thing often, even though the adult or caregiver may get mad at them or tell them they are in trouble. Just the mere fact that they are being spoken to and focused on, meets a need that they are missing.”

As he and his siblings got older, it got worse because none of them knew how to express themselves. Gilbert soon found himself suffering from depression, from all that built up resentment towards his parents, and bottling up all his emotions. He opened up to his mom about his depression, and the mother and son started going to group therapy sessions. She apologized for not realizing that he was depressed, for he did a very good job at covering it up. Gilbert saw a change in his mom, she began to talk to him more, like asking about his day daily and how he’s doing and feeling over all.

Gilbert considers himself very close to his mom now. He’s happy that when he opened up, she was understanding and tried to help by making an effort to go to therapy. However, his dad just asked if he was okay and didn’t ask for much details. He no longer resents his dad for making him feel ignored, but doesn’t see his dad as a father figure. Instead, he considers his godfather, his “Ninong” in Tagalog, as the father figure he wanted growing up.

“My Ninong, I look at him more as a father figure,” Gilbert said. “He gave me that attention I lacked in my own house.”

Sometimes all a middle child needs is a person who makes them feel understood. Zac Neumann is the middle child, and has an older brother and younger sister. He felt as though being the middle child worked in his favor because he didn’t want the attention anyways. He would mostly feel Middle Child Syndrome whenever he and his siblings got in a fight. His older brother always defended their baby sister, so it would only make sense that she back up her eldest brother. Zac felt double teamed whenever a disagreement would stir among the siblings.

But Zac’s mom is also a middle child, and she would tell him stories about how she felt like she was being ganged up on growing up as well.

“As we got older I think she started siding with me more,” Zac uttered. “It’s like she realized what it was like being the middle child, so she sympathized with me.”

Teachers can also play the “superwoman” or “superman” role to a student who feels neglected. Isabella Flores is an Extended Care teacher, and she has been working with children for five years. Isabella began to see behavior changes in a student who happened to be a middle child. The older sibling of this child got good grades and performed well in school, while the baby brother was still very young and got much of the attention. Isabella believes that’s why the child began to act out in school, she would be mean to other kids, boss people around, not listen to teachers, and overall just be defiant with her actions.

Isabella took matters into her own hands and reached out to the child’s parents. At first the parents acted as if they didn’t have time for the child, so she kept reaching out to the parents. She decided to take a different approach and tell the parents some positive things that their daughter was doing at school.

“I also highlighted good deeds the child did every day,” Isabella explained. “I’d point out what they have improved on. As I kept doing that the child did more and more good acts: helping the teacher, doing what was asked of them, being nice to others, etc. As this went on, the parents as well started paying more attention. They were proud and the child had the attention of the parents.”

Faye eagerly awaits the arrival of her third child. She describes her daughter as the wild child, the total opposite of her big brother. She laughs and says that her daughter was destined to be the middle child. Since Faye and her husband have raised two kids already, they see what worked in parenting and what didn’t.

When their first son was born, Faye was a stay at home mom for the first year of his life. She tried to teach him and stimulate his brain as much as she could. But when her daughter was born, things changed. She had to get a job to help provide for the family, and she realized she didn’t spend as much time with her second born.

“I didn’t get to spend as much time with her,” Faye explained. “You can kind of see it reflected on how they do. My son is [advanced], he reads, he knows all that stuff. And he knew all that stuff prior to going to school. But with my daughter, she had more of a hard time paying attention or learning. But I feel like it was attributed to us not spending as much one on one time with her. Now that we’re having our third, we’re trying to learn from that experience…” She takes a long pause and laughs. “But then in hindsight it would kind of go back to her getting Middle Child Syndrome because now we’re learning ‘okay, with our second kid we didn’t really do this with her, so now with our third kid we’re gonna do it.’”

Faye doesn’t know how her daughter will be when the new baby arrives. But she does plan to have frequent one on one dates with each of the children so they have mom and dad’s undivided attention. She thinks it’s important to spend quality one on one time with the kids to avoid any feelings of lack of attention.

Whether the diagnosis is real or not, one thing is for certain, that the feelings of Middle Child Syndrome are real.