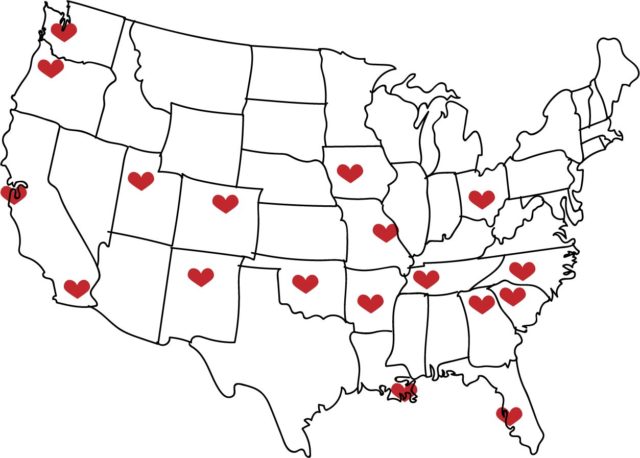 Sometimes you end up meeting the love of your life through a date, on the bus, online, or through mutual friends. No matter how they start or end, polyamorous relationships are enjoyed by different people for different reasons. Whether it is finding more people to love, or to fulfill a certain need that your partner(s) cannot provide. There is no true way to go about it, but the key is the same with any relationship.

What defines a polyamorous relationship? Associate professor of sociology & sexuality studies at SF State Christopher Carrington explains that, “there is not any easy and clear cut definition for this. Suffice to say that the term itself is new and linguistically represents a new concept. Poly is Greek for many, and amor is the Latin root for love. The dominant mating form was polygyny, although there are evolutionary and biological, as well as cultural factors that have facilitated the more widespread adoption of monogamy, at least social monogamy.”

For Riley Willis, a lesbian trans woman, and Ev Shulga-Morskoy, a pansexual transwoman, their bond was built when they hitchhiked across the country. They are in an open relationship, and currently live across the country from each other.

Riley and Ev first met on a Discord server called Transytalk, a free chatting service that is similar to Slack. But it wasn’t until last August that the two started dating.

Ev had always planned to hitchhike across the country someday, and she was planning to start her trip when she still lived in Boston. “My job said that they wanted to take me to our office to San Francisco for training. I decided to go, and quit my job when I got back to Boston.”

While she was in San Francisco, she would run into the person she would spend the next six months with: “I was in SF when I literally ran into Riley on the street while working. We made plans to hang out after work, and they were looking for something to do. So I suggested they come hitchhike with me, and they decided to go for it.”

Ev was still planning on going back to Boston to start her trip with Riley, but her employer found out she was quitting as soon as she got back, so she was fired. “After I got fired, I decided to say fuck it, and I skipped the flight back to Boston and left from SF with Riley.”

Equipped with a cardboard sign that said, “country roads, take me north,” Riley and Ev started off their northern trip on the US 101 highway. Ev took pictures along the way as they slept in the woods, traveled up skyscrapers, and rode in various vehicles that would pick them up on their way around the United States.

“Hitchhiking with Ev was great. We started out in San Francisco hiking up the 101 so we were surrounded by amazing scenery,” says Riley. They would go to various places like Portland, Seattle, Salt Lake City, Des Moines, and Tampa before they split off and went their separate ways. “While we did it, we stayed at various houses of friends that we met online, mostly from Transytalk . . . Ev and I will crash at another queer friends home for a few days and more often than not, Ev ends up at least partially seducing them, which is pretty adorable.”

Their relationship can be seen as casual to people who aren’t familiar with polyamorous relationships, but Ev explains that some people just overstructure their relationships, “They end up making all these rules like, how many times you can see each other, or how many people you can hook up with. The most important thing is communication, and if you feel like your needs aren’t being met in a relationship, it’s better to just voice that.”

Their relationship came about in a natural way, “when you’re stuck with someone for pretty much twenty-four hours a day for six months, it’s pretty natural that you end up growing close. So a romantic relationship kinda grew out of that naturally. And it made things more wonderful every day.” She smiles to herself as she remembers, “There were several times where I’d wake up in the middle of the night, confused, in the dark, and maybe scared, and I’d see Riley asleep next to me and that would make me feel safe again knowing that someone that cared about me was there.”

But it wasn’t all easy. Riley explains that, “when Ev got sexual with one of the people we stayed with, I did realize that I was feeling jealous eventually. I didn’t know how to handle it at the time because I thought I had grown past feeling jealous. I didn’t know any of the people we stayed with as much as Ev did. There were times where I felt like a third wheel, but that was due to my own shyness around unfamiliar people.”

Riley, who uses they/them pronouns, would eventually learn how to get past their feelings of jealousy through communication. “Now if one of my partners develops a new relationship, I make sure to get to know the new person. Befriending them seems to solve the issue for me. Though, I’m super anxious around new people so that does take time with me,” they say.

When they both made it through San Francisco, Portland, Seattle, Salt Lake City, and Denver, they would meet up in Des Moines with a non-binary friend named Christopher Cerreta, twenty-three, who also met them through the Transytalk Discord server.

Cerreta explains their experience hanging out with Willis and Shulga-Morskoy: “From the beginning, I became friends with Riley and Ev through regular interaction in online trans communities we all frequented. I found them to be very fun and sociable people, and I offered to let them stay with me as they were traveling around the US.”

Cerreta would pick them up at a gas station with another friend after they were dropped off by their last driver. “They stayed with me for about four or five days before getting back on their trip. During that time we primarily watched some anime on Netflix, and we just basically talked about our interests,” they say.

From Des Moines, they would go to Oklahoma City, Little Rock, Memphis, New Orleans, and then Tampa before Riley took a bus up to Boston, and Ev would head on off on her own through Atlanta, Columbia, Charlotte, Columbus, St. Louis, Oklahoma City again, Albuquerque, and Slab City before going back to SF.

Riley’s favorite city was New Orleans: “The French Quarter had really cool architecture, and we stayed with this guy Ev met on a couchsurfing app who had a bunch of other travelers staying to fix up his house. Nola [New Orleans] had lax open container laws, so you can wander around Bourbon Street and pick up free booze people just left lying around. The food there was pretty amazing, and wandering around on Halloween on acid was pretty amazing.”

Just like with how sexual orientation varies between person to person, poly relationships also have their nuances between people.

Sophia Kumin is a twenty-three year old lesbian woman who lives in Atlanta, Georgia. She is currently in an open relationship with a cis-hetero man, and explains why her relationship is open.

“I had known I wanted to be non-monogamous since I was 18. He [her current partner] chose to stay monogamous with me, though, because he isn’t poly. He’s just fine with me doing my own thing. I do basically identify as a lesbian who has made an exception.”

While Riley and Ev enjoy a relationship where both partners are able to freely be with anyone else, Kumin’s relationship only has her branching out to different women as her partner has a few restrictions that they both agree on.

There are few rules in their relationship, but the only big one is that Sophia’s partner does not want her to be with other men, and she is currently fine with that due to her being a lesbian. “There are basic rules like “wash the sheet” if I have someone stay over while he’s out of town or something, but that’s really rare,” she says.

How did a lesbian woman start dating a cis-hetero man? “We lived on the same apartment complex and had seen each other, but we never made a connection at the time because I was with someone who specifically did not want me dating a cis man. I was also not interested in men so I didn’t really want to pursue that.”

Sophia would later get to know her current partner more after she broke up with the person she dated prior: “After I broke up with my ex, I started looking on OkCupid and matched with my current partner, who recognized me from living next door. We basically exchanged three messages and then I went over to hang out.”

She describes her current partner as smart, compassionate, and sensitive, “He gets really into niche hobbies and interests and researches everything so thoroughly, he’s like my own personal Google. I love him a lot, he’s my best friend and we have a lot of fun together.” Her partner was not willing to be interviewed.

Love between multiple people is just as valid as any bond between just two. As with all relationships, communication and boundaries are key. It can fit the needs of everyone involved as long as everyone agrees with how the members act. It can be used to fill the needs of certain people who want a different sexual experience outside of their own relationship, and it can be used as a way for partner(s) to explore with other people. It might not be for everyone, but it can work for anyone looking beyond the boundaries of monogamous relationships.

As Sophia said, “Realizing I could create my own types of relationships and that there was no right or wrong way to have a relationship, is very refreshing.”