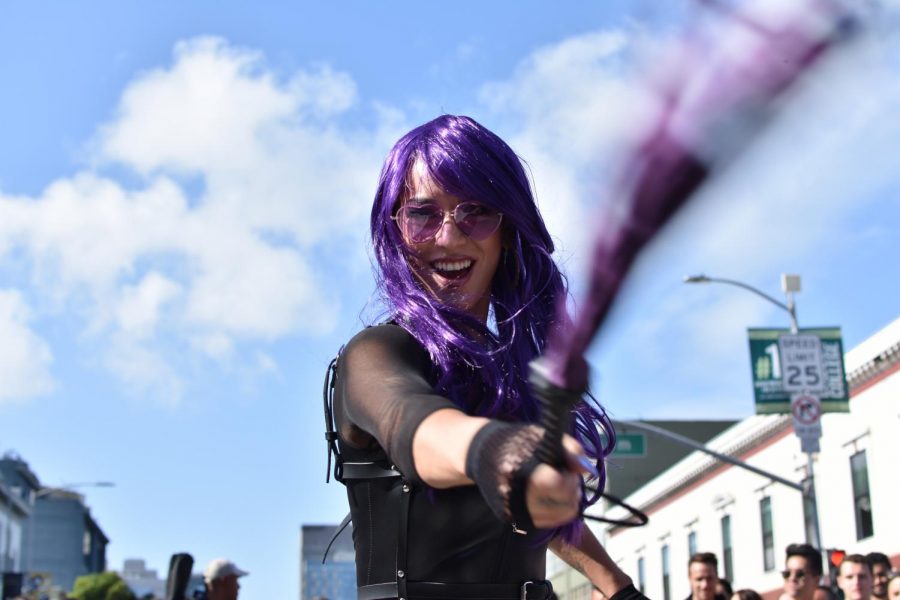 By Andrea Williams and Photos by James Wyatt
February 18, 2020

Editor’s note: There’s an erect penis in this story. Read our content warning about it.

Nudity, leather, whips and bondage: there is nothing like San Francisco’s Folsom Street Fair. For one Sunday a year, a portion of Folsom Street in the SoMa district transforms into a kinky wonderland. For decades, thousands of people have come together to celebrate and explore sexual fetishes and alternative lifestyles dressed in full leather regalia, chains, lingerie, puppy hoods and harnesses or even no clothes at all.

Dominant and submissive relationships are visible everywhere you look. Men and women walk their human “puppies” through the crowd on leashes. Some are even gagged. If they stop, dominants spank their puppies with a paddle or yank on their leashes to make them move.

The sound of whips echo past the main walk of the fair, over the sound of the bustling crowd and loud music. Freshly whipped and paddled asses shine bright red with welts and drips of blood. Booths selling varieties of whips and kinky toys also have crosses where volunteers can be bound and then repeatedly flogged by a professional dominant. People uninterested in being beat can observe the various forms of intimacy: oral sex and passionate kissing can be spotted throughout the crowd.

Folsom Street Fair is the world’s largest leather event and has inspired other Folsom Street fetish events all over the world, from New York City to Berlin. It creates a safe and exciting environment that brings curious adults and members of various kink communities together. The fair encourages and thrives off of self expression, community activism and sexual fantasies.

“This festival is about love and inclusion and that’s why I have been coming for six years now,” said Fabulosa, a fair attendee dressed up in black latex with ram horns and roses atop her head. “It welcomes all types — all looks, sizes, ages, whatever fetish you’re into and even if you’re not into a fetish, anyone is welcome.”

The event is organized by Folsom Street Events, a grassroots and volunteer based non-profit organization that donates the total net proceeds from every event to local charities supporting the LGBTQ community and public health. In 2017 alone, over 250,000 people attended the fair and the organization was able to donate $322,484 to local and national charities.

FSE Director of Volunteers Roberto Quadra said almost 700 community volunteers worked together this year to make this unique and amazing event possible. It is estimated that over 400,000 people were in attendance.

Not everyone who attends the fair dresses up or participates in the wide array of fetish and kink activities made available to them, but everyone is respectful and accepting of the eclectic crowd.

No one photographs or touches people without their consent, although there are many first timers who gawk at all the spectacles. Although some of the sights seem shocking to some people, everyone at the fair has a smile on their face. The positive energy of the environment is contagious.

Quadra explained that Folsom Street Fair is a melting pot for all different types of kink, fetish and queer communities. It goes beyond just leather and bondage cultures. There are booths where you can get tested for HIV in just 20 minutes and multiple music stages where people gather around and dance with friends and strangers. But what Quadra was most excited about this year was the Playground, a special gathering space in the fair reserved for transgender women, queer femmes and queer people of color.

“It’s really important to center trans and fem folks in a place that has historically been masculine and provide them with a safe space,” Quadra said. “We really expanded on that this year, more than ever before and it’s amazing.”

The culture and community around Folsom Street is inclusive and accepting of all marginalized communities but has historically been centered around the gay leather culture.

For many years SoMa was a gritty, working class neighborhood — and a hub for gay biker clubs. To celebrate San Francisco Pride and the city’s gay community, local travel website SF Travel aggregated relevant historical content. This included an article Life magazine published in 1964 titled “Homosexuality in America” which featured a popular SoMa gay bar, The Tool Box. The article caused even more gay men to move to the city and cemented “San Francisco and SoMa as the capital of gay deviance.” By the late ’70s there were almost 30 different leather bars, biker clubs and bathhouses in SoMa and Folsom Street was the center of it. It was nicknamed “Miracle Mile.”

He remembers how non-existent gay media coverage used to be and how most public images of gay men in those times were negative and tragic. For West, the biker and leather bars of SoMa and Folsom Street Fair diverted from the fixed negative image of gay men and exposed society to and celebrated leather culture and dominant/submissive relationships.

“It gave gay men more places to go with their identity,” West said. “Which is big help for a lot of gay men who feel like ‘I wanna be myself, but I don’t want to be that’ — that being a negative image given to them by the media.”

The first Folsom Street Fair was in 1984. It was created by community leaders and activist groups to fight against neighborhood redevelopment and raise money and support for the community, who were being devastated by the AIDS crisis. Since the ’80s, the community and SoMa neighborhood has seen drastic changes, but Folsom Street Fair has done nothing but grow and expand across all spectrums of the LGBTQ and kink communities.

Because of redevelopment and gentrification, most of the original biker clubs and leather bars have closed their doors and the modern remaining kink and fetish businesses continue to struggle amid rising rents. However, the community is still kinky as ever and one can find naughty community spaces any day of the week.

“San Francisco is a city that caters to wild expression and it’s important to support these places and keep them alive,” Quadra said. “Places like Wicked Grounds almost went out of business recently because the neighborhood is becoming more and more gentrified by these luxury condos and it has a serious effect on our ability to hold space in this city.” X