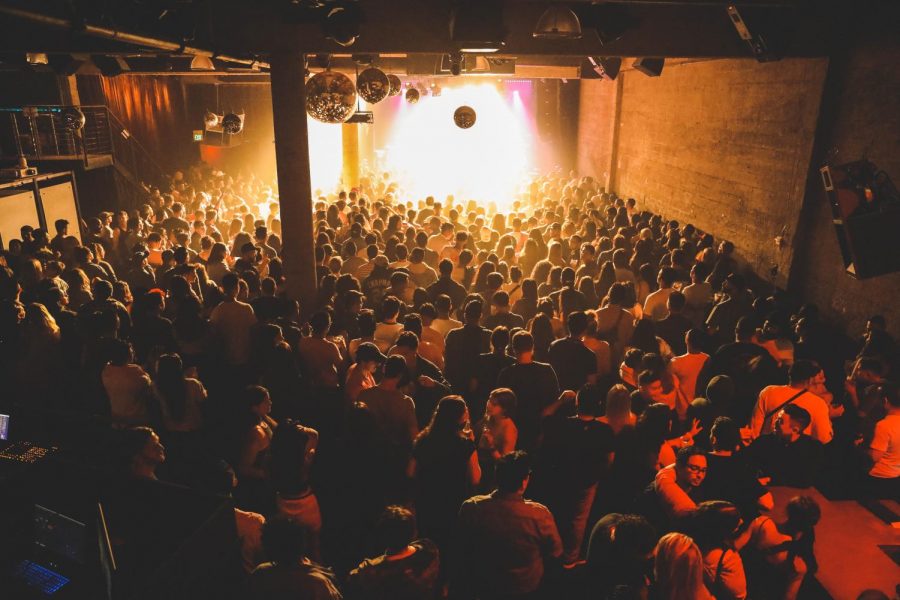 No such thing as personal space as concertgoers crowd the floor of the Mezzanine during the first performance on Sept. 24, 2019 in San Francisco, California

By Amy Bigelow and Photos by William Wendelman
October 30, 2019

As yellow lights scatter patterns of squares all across the 7,700-square-foot venue, onstage, a band is running through their setlist and tuning instruments. At Mezzanine, soundcheck for Ginger Root is nearly finished and its members are ready to captivate concertgoers with their opening performance.

For the past 16 years, moments like this have produced a multitude of memorable concerts for audiences, showcasing both local and established musicians at Mezzanine. As one of several independent music venues in San Francisco, this intimate space has seeded an appreciation for the city’s vibrant music scene — especially for the local band circuit — among the masses.

But as of last October, curating monthly concerts and private events has become a grim operation. Mezzanine faces the looming possibility of a permanent shutdown in the coming months.

Located in the SoMa district of San Francisco, Mezzanine has resided on Mint Plaza since it opened in 2003. The venue currently shares the space with its building owners, the Chritton family, who run their Microbiz security installation company from the basement level. According to a Mezzanine press release that was issued a year ago, the Chritton family has decided not to renew their 20-year lease, and now plan to convert the venue into office space for their family business.

Landlords who monopolize their properties for financial gain, as gentrification spreads throughout the Bay Area, are forcing smaller venues like Mezzanine out of San Francisco. Even with support from devoted music fans and city officials, Mezzanine may soon become yet another venue to leave behind its cultural mark on the city.

“I’m devastated. Not only is my dream of being a venue owner ending, and 40-plus people are going to be out of jobs, but the city is losing such a great space that has been so inclusive to every kind of music, every culture, literally everything,” said current Mezzanine owner Deborah Jackman.

After joining her staff in 2007 as general manager, Jackman has overseen the venue’s daily operations working with talent buyers and various in-house managers, ensuring that each Mezzanine event is a great experience. Having managed several venues and restaurants in New York City for nearly two decades, Jackman moved to San Francisco to be part of the “jam band” epicenter — the birthplace of prominent artists like Janis Joplin and the Grateful Dead.

Now that Mezzanine is one of the few female-owned independent venues in the Bay Area, Jackman and her staff continuously make vast contributions to support the local music scene and foster an inclusive community for everyone.

Mezzanine books 12 shows a month highlighting a wide array of artists from different genres — including the rhythm and blues artist Pink Sweats, aspiring hip-hop DJs, and ska-punk bands like The Selecter. Most performances feature local artists on the bill. Jackman is elated to give up-and-coming groups, like Ginger Root, the opportunity to share the stage with someone like LCD Soundsystem or Justin Martin of Dirty Bird.

“That’s the cool thing about this job, it exposes you to people you’ve never heard of that you might actually listen to after a show,” said Michael Lee, who has been the production manager at Mezzanine for eight years.

While Mezzanine is an established concert space, unlike other music venues in the city, it also functions as confluent spot for diverse communities to enjoy creative nightlife entertainment. Huge city events including the Pride Parade and Folsom Street Fair are accompanied with Mezzanine after-parties, along with San Francisco film festivals and fashion shows. Jackman loves that there’s something for everyone and a different crowd every night Mezzanine is open, which will be greatly missed — if and when — the venue closes down.

After the building owners refused to renew their lease with Mezzanine, and considered raising the rent from $10,000 to $60,000 a month, Jackman has relentlessly made several negotiation attempts to make the venue’s occupancy more appealing. In asking for a short-term lease extension, Jackman envisioned partnering with Another Planet Entertainment, an independent promoter, to help the venue financially stay afloat.

Being an independent venue owner, Jackman currently does not have the same financial leverage or conglomerate oversight from bigger promoters like Live Nation, compared to other Bay Area venues like The Warfield or Slim’s.

Luckily in July, under the discretion of District 6 Supervisor Matt Haney, the San Francisco Board of Supervisors unanimously passed temporary interim controls to protect SoMa venues.

These temporary interim controls give building owners in the SoMa district 18 months to acquire a change of use permit, with approval from the San Francisco Planning Commission, if they want an entertainment space to serve a different purpose.

Regardless of the efforts made to ensure Mezzanine’s prolonged residency in San Francisco, the Chrittons are adamant about their future plans for expanding Microbiz.

“I don’t think that we would be pleased with another venue that provides live music to go away and to turn into another use such as office space,” said Maggie Weiland, executive director of San Francisco Entertainment Commission in an interview with Grammy.com. “Personally, I would be very sad; I’ve been going there since I was 21. But also just on a professional level, it’s not a great storyline for our city.”

More independent venues in San Francisco have also succumbed to gentrification at rampant speed. Last October, Hemlock Tavern closed after nearly two decades of business when the Dolmen Property Group bought the building earlier that year. What was once a welcoming place among both bands and patrons alike, has now been demolished. The empty space on Polk Street will soon become another metropolitan oasis of condos and small retail outlets.

Another veteran venue, Elbo Room, shuttered in January once their one-year lease extension expired. After operating as both a dive bar on the ground floor and small music venue on the second level, co-owners Matt Shapiro and Erik Cantu decided to relocate their prominent entertainment hub to Oakland. The original establishment, located on Valencia Street, was then put on the market for $4.2 million.

To commemorate its predecessor, the same building reopened as The Valencia Room in May, hoping to keep the integrity of Elbo Room intact. Aware of Mezzanine’s current situation and how the current market has impacted business for many smaller venues to keep thriving independently, The Valencia Room isn’t worried about facing pushout anytime soon.

“I was bummed when I found out about Mezzanine because I used to go to a lot of shows there when I lived in the city,” said The Valencia Room general manager Eddie Valadez. As a business with a built-in clientele from its previous owners, The Valencia Room has adapted to the current climate by rebranding themselves and promoting local artists.

“The San Francisco music scene will always be around — we’ve had bands as far as Sacramento drive down because they know they can play a show here,” Valadez said.

Having performed at The Valencia Room for a second time now, San Francisco-based alternative rock group — The Turnouts — have recently gained more exposure after touring around California and playing at local venues and bars over the summer.

“In our experience, San Francisco has been really cool because the venues are smaller, there aren’t a whole lot of bands out here that are gigging regularly, so it’s easy to meet people and get into the scene,” said The Turnouts lead singer and guitarist Mason Mejia.

For The Turnouts, the biggest challenge in playing the local music scene isn’t solely gentrification, but rather outside promoters taking advantage of local artists by setting a “pay to play” atmosphere, which can discourage up-and-coming bands from performing at all or not taking the music community seriously.

“Usually people who own the smaller venues actually give a fuck about the bands playing,” guitarist Clayton Silva said. “It feels more like you’re hanging out and jamming with your friends than it feels like you’re putting on a show and sometimes that’s even better with a good lineup and an energized crowd. We are very appreciative of every show we can land.”

Noise Pop marketing director Lamont Harper believes the closure of independent music venues in San Francisco are giving smaller artists less room to play and be heard. For bands looking to gain exposure, he suggests performing at community centers and applying their talent online. “For musicians, their digital footprint can be just as loud as it is in the physical world,” Harper said.

In addition to playing various gigs since 2017, The Turnouts have recently released their self-titled debut album on Spotify, which was produced by their newest member and trumpet player Sean Greenfield.

When it comes to the local band circuit in San Francisco, Deborah Jackman agrees with Harper, but also believes that both independent venues and the artists themselves can no longer afford to stay in the city.

“I came here thinking it was a smaller city, that I would have more impact, I’d have more of a voice and give more support to local bands,” Jackman said. “Now the same thing is happening. I think it’s actually worse than New York because of the major housing crisis.”

Still, Jackman and her staff put every effort into making the most out of every Mezzanine event — especially now since the future of the venue is in question. A few weeks ago on a whim, avid concertgoer Fernando Martinez, 21, watched Ginger Root perform at Mezzanine. After frequenting different venues around the Bay Area, in comparison to bigger auditoriums like Bill Graham, Martinez enjoys coming back to Mezzanine for the experience.

“There’s always a handful of people at the smaller shows that just want to go for a fun night out at a venue. Yeah, there’s dedicated fans, but there’s also a small portion that want to just have fun,” Martinez said. From his perspective, regardless of the current state for independent venues in San Francisco, as long as the venue is still open, people will show up to have a good time.

Jackman said the Chritton family has not yet applied for a change of use permit and fails to acknowledge the integral role Mezzanine has played in the local music community for almost 20 years. While the imminent future of Mezzanine has yet to be determined, music fans continue to support the local music scene.

“I won’t give up hope until the last day,” Jackman said. X