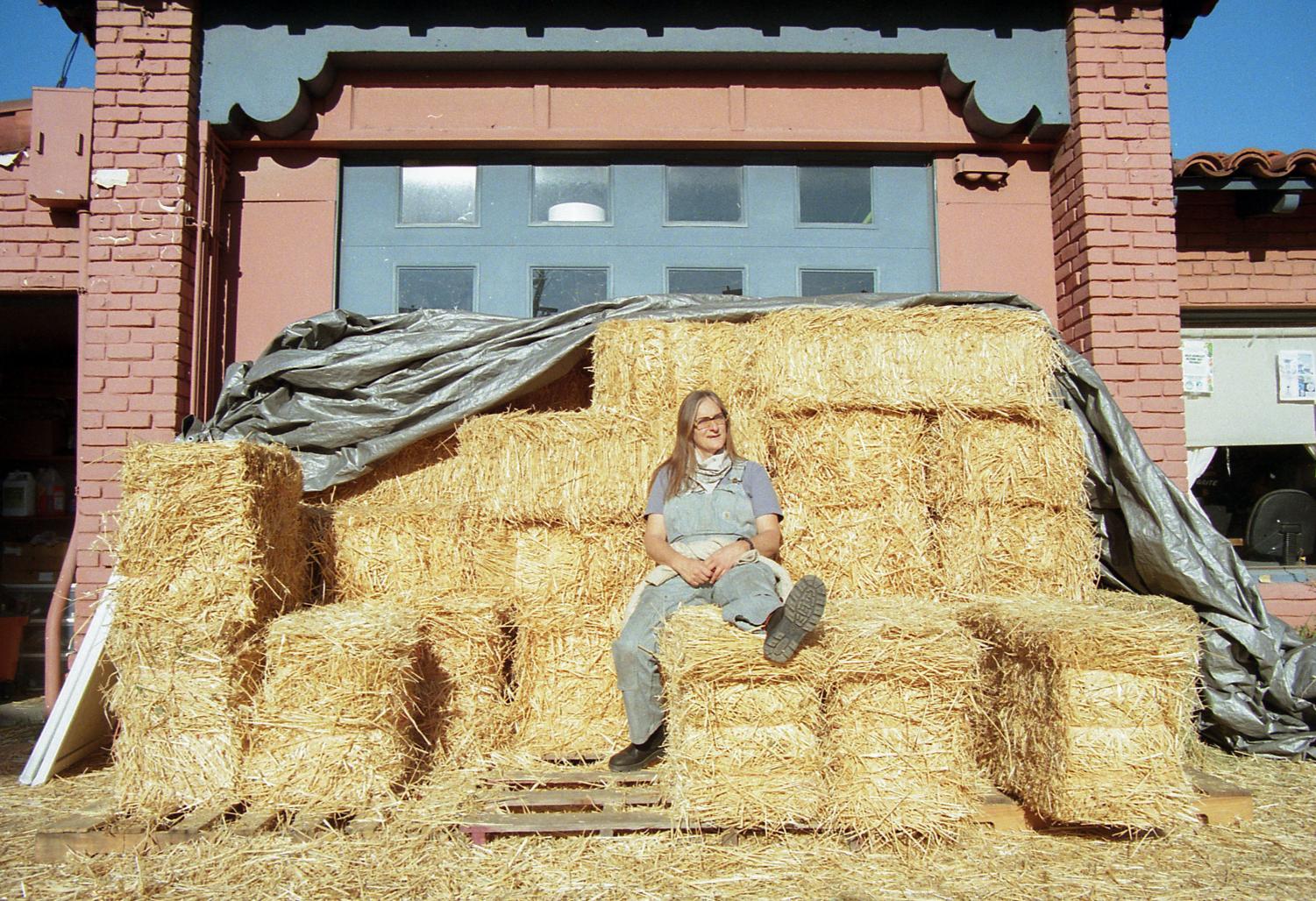 Novella Carpenter, co-founder and co-owner of the BioFuel Oasis Cooperative in Berkeley, poses for a portrait on the stacks of hay behind the store Feb. 5, 2022. (Morgan Ellis / Xpress Magazine)

Novella Carpenter, co-founder and co-owner of the BioFuel Oasis Cooperative in Berkeley, poses for a portrait on the stacks of hay behind the store Feb. 5, 2022. (Morgan Ellis / Xpress Magazine)

Oasis in the Gaslands

Joe McCauley checked the side of his car for any spilled oil.

“It will strip the paint off your car if you’re not careful,” he said. “But it’s good for the environment and your car. Diesel engines love it.”

McCauley drives a 1984 Mercedes 300D and fuels it with biodiesel, an eco-friendly alternative to fossil fuel made from recycled vegetable oil. He comes to the BioFuel Oasis Cooperative in Berkeley several times a month because, he said, it’s better for his car.

“It’s better for your engine, actually, if you can believe that. And it smells good,” he said.

There is a stack of straw that rests against the back of the small brick building, either reflecting the sun at drivers or shining on an overcast day drawing the eye from the surrounding area. The sounds of honking and the occasional screeching of tires on the busy intersection of Ashby Avenue and Sacramento Street betray the illusion that the station exists somewhere outside of the city.

“We had a meeting to talk more about her idea. In true Californian style, we talked while soaking in a hot tub at night under the stars.”

At the time, Radtke was making biodiesel and teaching classes on how to do so in Berkeley and Oakland as part of the Berkeley Biodiesel Collective, a group of volunteers and activists for biodiesel. It was there that the seeds for the BioFuel Oasis were planted.

“This guy came to the meeting and said there should be a Chevron or something selling bio, like the goal should be that every gas station has biodiesel,” Radtke said. “And that really annoyed me because I was like, ‘No, that’s not what should happen.’ Because what’s the point of giving your money to a big corporation?”

It was around that time that Smith, another founding member of the original location, met with Radtke in the hot tub and asked if she wanted to start a station. Unlike the impersonality of a traditional gas station, the BioFuel Oasis would be a place for community to connect.

“I want to create a place that has a connection that is a locally owned business, so the money that is being spent is staying local, going to good people,” Radtke said.

The space they settled on was a small warehouse on Fourth Street where cars could pull in and fuel up. They sparsely sold books and candybar supplements, but people primarily went for the eco-friendly fuel and community.

“We had like this red couch in there, and people would come and sit for like an hour, talk to other customers,” Radtke said. “It became this very community space.”

It was also around that time that current co-owner, Novella Carpenter, came around.

“We’d have to go scrounge for veggie oil at night and the dumpsters and was super dirty, you know, you just like covered in grease at all times, and we would make biodiesel,” said Carpenter.

Carpenter, a journalist and adjunct professor at the University of California, San Fransisco, said she got involved after writing a piece about the collective for the East Bay Express.

“And then I was like, ‘I want to know more about this cool place.’ And then before long, they hired me,” said Carpenter.

Since then, the BioFuel Oasis has moved locations to where it currently is now on the corner of Ashby Avenue and Sacramento Street. The owners took over a former gas station and made it into a model of sustainability in 2007 and opened in 2008.

There was only one pump at their original station, which meant employees would use carboys–canisters of fuel–to hand-fill customer tanks. They would have to lift the jugs and pour them individually. The new and current location has four pumps, allowing them to offer more biodiesel to customers while making it more accessible.

“Having four pumps really changed the game,”  said Carpenter, adding they put in solar panels and used natural building inside the shop in an effort to make the building into a model of sustainability.

But after the move and rebuilding, the new location faced some uncertainty. The recession hit.

“It was like ‘wamp wamp.’ But it was fine, I mean, we ended up pulling through, and we’ve really gone through a lot of changes and different people working here. And it’s always a really vibrant scene,” Carpenter said.

Now, on any given Saturday, customers come by to buy fuel, feed and other things for urban farming. Customers, like Casey Parkhurst and Ashley Scism, stopped by to buy materials for their apiary.

“We’re here buying parts for beehives,” Parkhurst said. “We’ve been keeping bees for about 15 years, but we’re going to now have our own bees at our own house for the first time ever.”

Aside from parts for a beehive, Parkhurst and Scism were also there to pick up a nucleus, which is a way to start an apiary. It includes five frames and a queen.

Starter kits for beekeeping are just another feature of the BioFuel Oasis, which also sells natural care products, seeds, succulents, feed and books. The accessibility of the fuel is another reason why people come by, said co-owner Kate Hobbs. The modernization of getting the fuel has helped encourage urban farming and apiary customers consider switching to biodiesel.

“It has the same card reader type setup, it has the same pump type setup helps people to think, ‘OK, maybe I could make that switch,’” said Hobbs, who started as a customer for the chicken feed that the cooperative sells before being hired and eventually joining the BioFuel Oasis.

But there is a downside to running a biodiesel station. They are regulated by what kind of fuel they can sell.

According to Carpenter, around 2014, the California Air Resources Board, which regulates biodiesel, changed the regulations.

“[They] made it so we couldn’t sell biodiesel like we were selling,” Carpenter said. “We were selling B99, so like 100% biodiesel.” She added that the CARB made it so that retailers could only sell 20%.

“The California Air Resources Board going off one study showed that there was more nitrous oxide emitted from biodiesel than regular diesel,” Carpenter said. “So, we switched to the 80% renewable diesel, which is a cool product, because it’s still not a petroleum product.”

Soon after her return, Hobbs and Carpenter decided that they could offer more for the community, which is when they started offering classes on urban farming and beekeeping. They did this because they sensed that people wanted more hands-on learning.

“People are really searching for something tangible; I think our classes offer that and usually Kate and I like to do pop-ups because it’s free,” Carpenter said.

The hope for the free classes is to give back to the community, to create a lasting change.

“We want to be that spot where we’re welcoming neighbors. We’re hanging out. We’re all in it together, and we’re learning how to grow stuff together,” Carpenter said.

Because the BioFuel Oasis is a cooperative business, it means it is owned by the people who work there. Carpenter believes that this structure allows for a more impactful working relationship with both the business and the community. To her, it is a more fulfilling way to earn a living.

“The reason I love it is because I feel like we have to do something different as a species like the status quo isn’t working right for anybody. And everybody is unhappy, and they’re in their cars, and it sucks,” Carpenter said. “But if you’re working at this wonderful gas station, there’s so many cool people that come in and meet all these like random people that are doing really amazing work.”

Editor’s Note: In an earlier version of this article, Ashby Avenue was incorrectly identified. 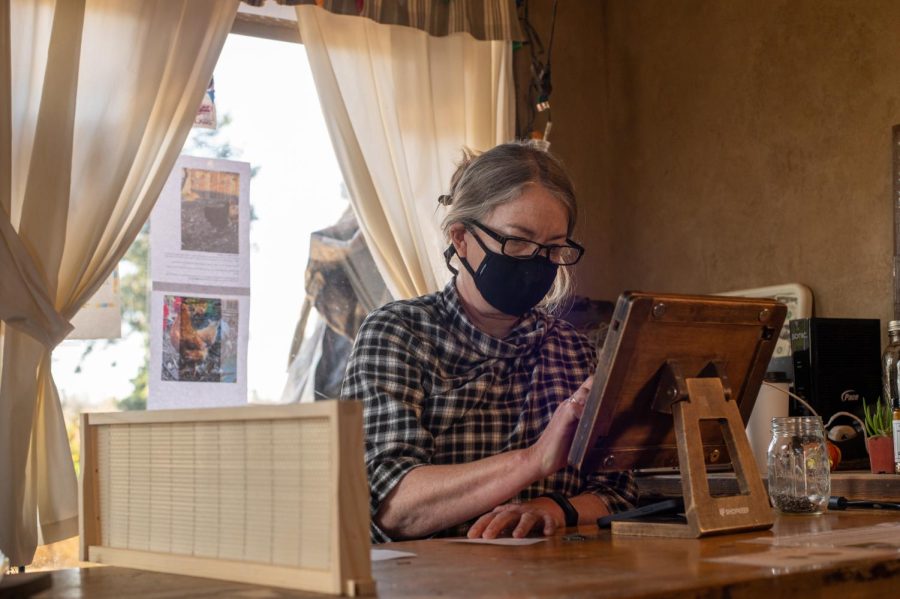