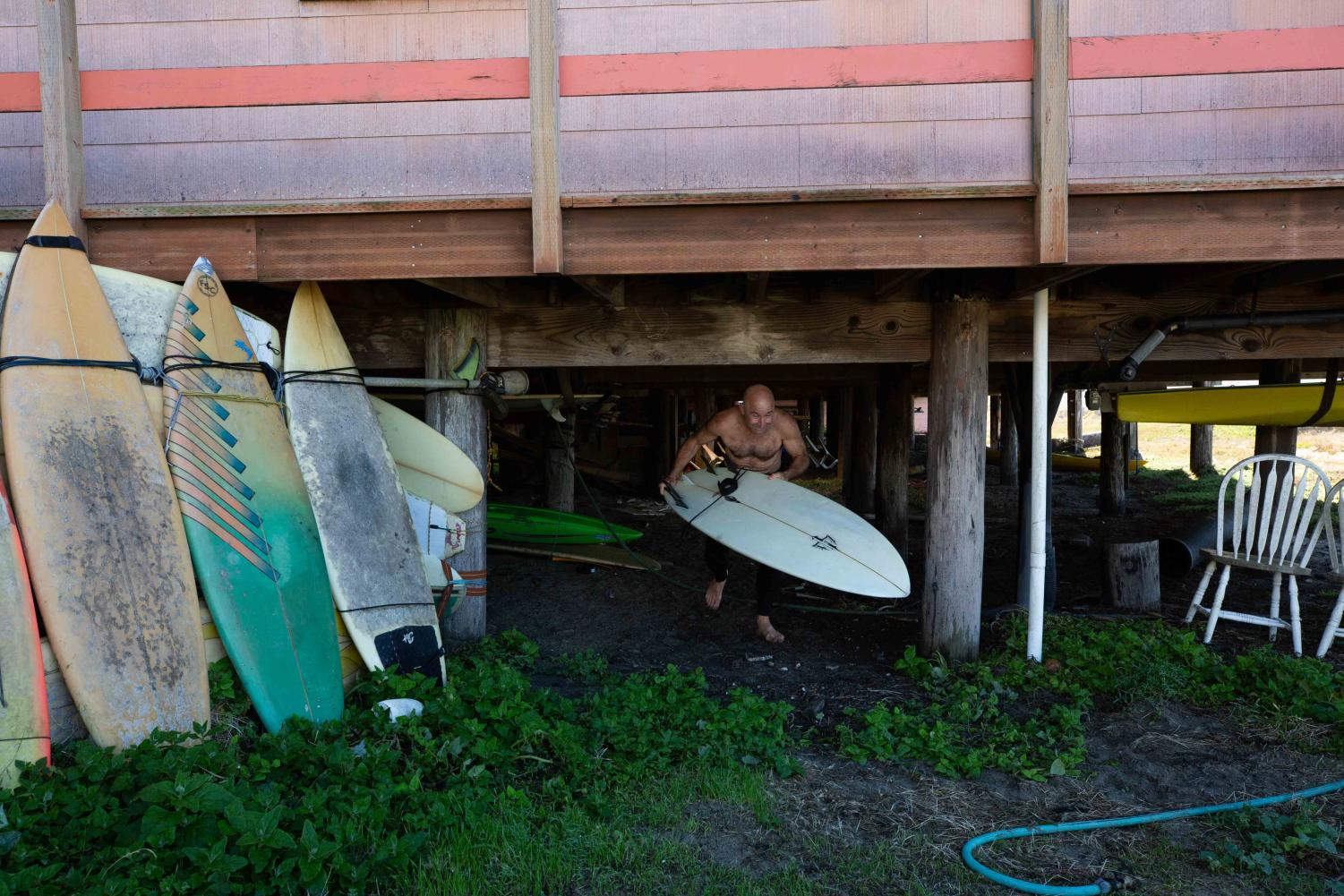 Heartlife heads out for his afternoon surfing session with his son Kai. His partner Lissen LevChaya said that being near the ocean is an essential part of their lives and happiness. (Saskia Hatvany / Xpress Magazine)

Heartlife heads out for his afternoon surfing session with his son Kai. His partner Lissen LevChaya said that being near the ocean is an essential part of their lives and happiness. (Saskia Hatvany / Xpress Magazine)

Close to the Heart

David Heartlife has Made a Living as an Environmental Performer, Now His Backyard is Affected by Climate Change.

On a misty San Francisco morning in front of a crowd of excited children, David Heartlife stuffs a plastic bag into a magician’s hat and taps it with a magic wand. But this time, the disappearing act won’t work — and that’s exactly the point.

Acts like this represent his life’s work. For over 20 years, Heartlife has been a passionate environmental educator, performing in schools around the country through his and his wife’s company Earthcapades. The plastic bag, emblematic of a worldwide plastic pollution problem, is one thing that even they can’t make disappear.

“Even if our message doesn’t get through, if we are spreading joy, and kids are out there laughing…I feel like my work is done, and I really love it,” Heartlife said. “The world needs laughter.”

Heartlife, who is nicknamed “Hearty” by most of his friends, has sported a heart-shaped patch of hair on the back of his head for the last 10 years. Only his mom still calls him David, he said.

While traveling through Tennessee in the early ’90s, he met his wife, Lissen LevChaya, who was 22 years old at the time and a self-described hippie. Ever since then, they’ve been living, traveling and performing together. Occasionally, their 14-year-old son Kai makes a juggling cameo in their shows.

Their home, tucked away in a hidden Bay Area cove among a collection of historic buildings, is as unique as their career. The coral-colored house is perched on wooden stilts, much like the 6-foot stilts that LevChaya stands on when she disguises herself as a great towering tree for a piece about the importance of protecting forests.

“We have the best TV in the world,” said Heartlife, gesturing to the sweeping view of the Pacific Ocean, perfectly framed by a large rectangular window in their living room.

Clad in rust-colored wood, the walls are reminiscent of the interior of an old sailboat. Juggling clubs and original artwork line the wall, and the dining room table looks out at yet another glittering panorama of the water.

He stumbled upon the unique living situation in his 20s when he was moving to San Francisco from the East Coast. A man sitting next to him on the flight struck up a conversation and invited him down to the beach to surf. He moved in shortly after and has lived in the tight-knit community ever since. 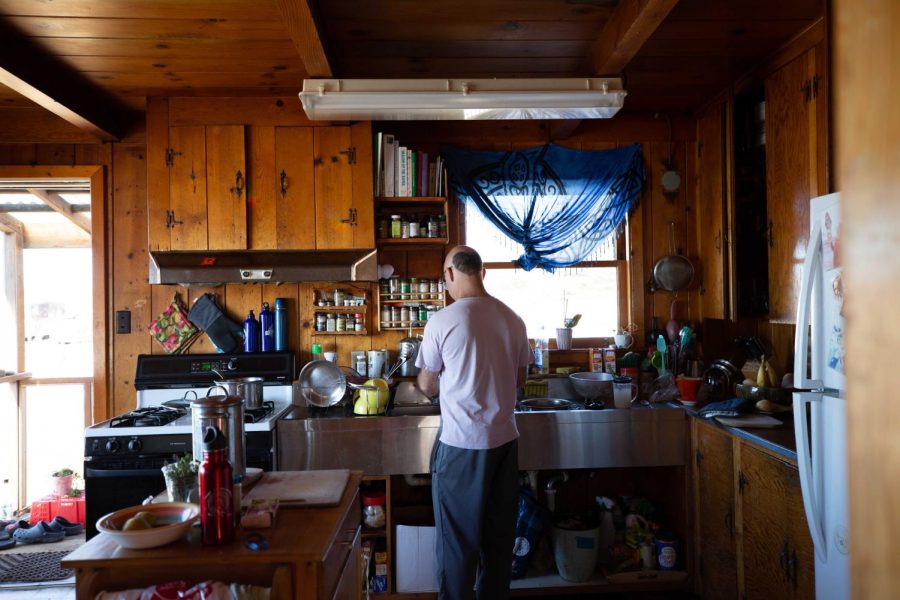 Gallery|3 Photos
The kitchen, like the rest of the house’s interior, is clad in wood and overlooks a the small beach community that the family calls home. (Saskia Hatvany / Xpress Magazine)

“As soon as I saw this place, I was like this is home, this is the place of my dreams,” Heartlife said.

His childhood was spent immersed in nature. Growing up in New Jersey, just steps away from the beach, he fell in love with surfing and the ocean. When he eventually went to college in Vermont to study environmental education, he fell in love all over again — but this time with the circus arts. That’s when he decided to combine the two things he loved, a hybrid that he now likes to call “edutainment.”

“Being connected to nature is a very important part of my work. It’s my identity…and it’s important to me that what pays the bills is doing a good thing that I feel good about,” he said.

The reality of climate change is something that Heartlife faces every day — quite literally. Each year, the beach outside of his living room window grows narrower with the rising sea levels. In years past, waves have been so powerful that they’ve ripped garage doors off, imploded windows and one time even swept a dead seal into a neighbor’s garage. But he’s determined to stay as long as possible, even until the ocean eventually reclaims the structures.

“We’re all happy as long as he surfs, so staying near the ocean is really important,” said LevChaya.

Despite living in one of the most expensive cities in the country, the pair have enjoyed a modest yet sustainable income as performers. In recent years, their company Earthcapades has been funded mostly through grants provided by local water districts, and other organizations with a vested interest in environmental education.

As the pandemic shut schools down nationwide, they quickly adapted to online performances, turning the downstairs laundry room into a live performance studio complete with a large greenscreen and studio lighting.

But last year, as the 2021 United Nations Climate Change Conference unfolded, Heartlife couldn’t help but feel an overall sense of disappointment — one that he’d been feeling for quite some time.

“I was really scared that people were gonna get COVID and die, and at the same time, I was feeling a sense of relief because airplanes weren’t flying and cars weren’t driving so much. Like, wow, maybe there’s a ray of hope, maybe people will realize…that our climate crisis can be improved,” he said. “And I just feel like it didn’t happen.”

Last year, he started taking classes at the Clown School of San Francisco — which is less of a professional theater course and more as an exploration of therapy through clowning. Heartlife said that the course helped reveal his deep sadness around the state of the environment.

In the school’s bi-annual performance in late 2021 — aptly titled “Clown Immunity” — Heartlife performed a dramatic piece in which his clown character goes for a swim at the local beach, only to find the sand littered with trash. In his Zoom-sized rectangle and to the backdrop of an impossibly littered beach, his character attempts to ‘clean up’ the trash in a futile and tragic effort.

“I think in general, my character has always been pretty silly…but there’s also a deep sadness,” Heartlife said. “The deep sadness part is something that I don’t show a lot, or don’t always have access to.”

But it’s only another motivator for Heartlife, who has dreams of someday becoming a docent and giving people educated tours of the cape and of the local environment that he feels so deeply connected to.

“I don’t have any really big desires to make a lot of money. Although lately, I’ve been thinking about retirement…I’d like to have some sense of security,” said Heartlife. “But, we’ve been comfortable. We’ve been good. We love our life.”

Due to unsafe public access to the cove, its specific location was omitted from this article.