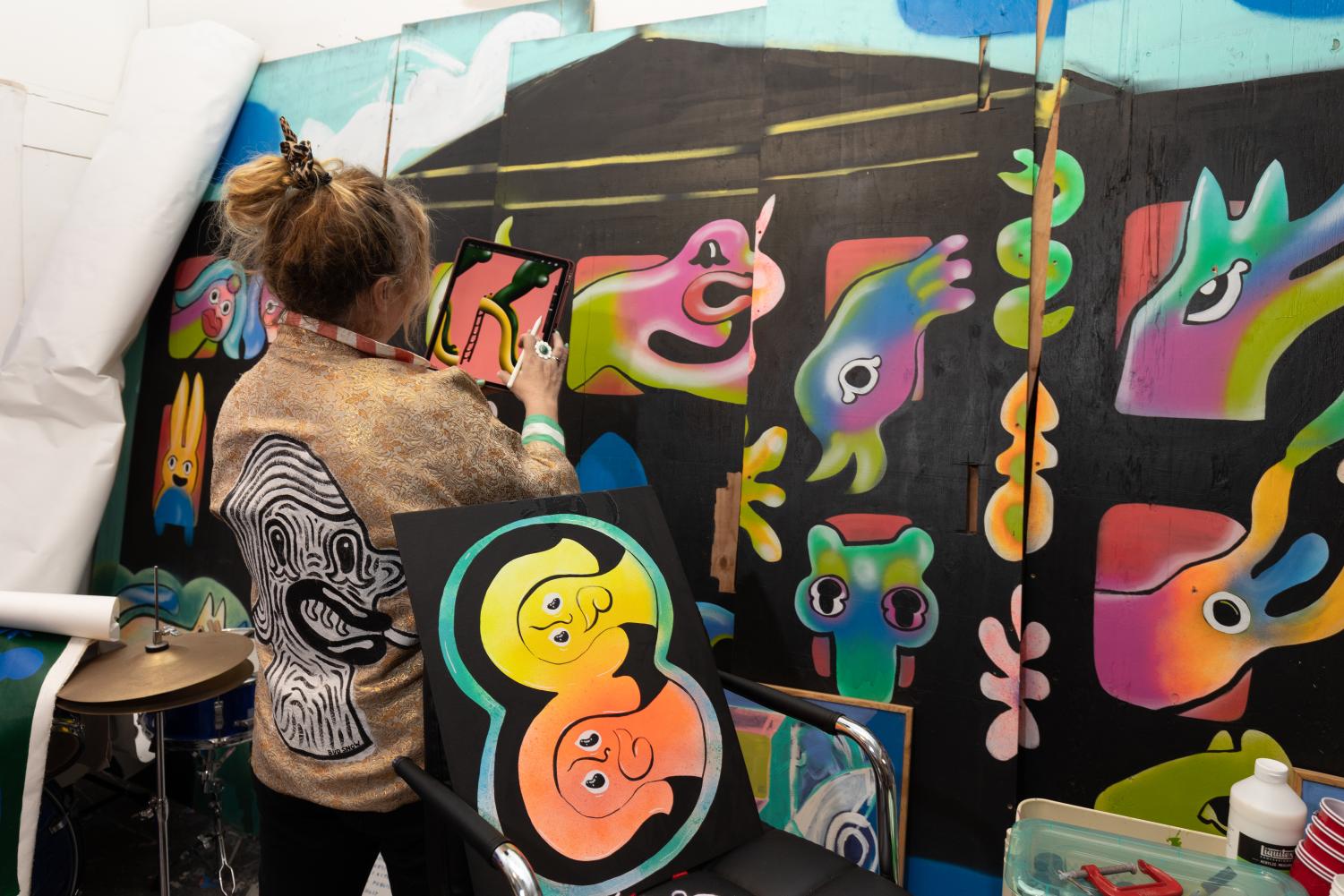 Bud Snow, an artist based in West Oakland, holds her iPad while surrounded by her art pieces in her studio on March 10, 2022. (Abraham Fuentes / Xpress Magazine)

Bud Snow, an artist based in West Oakland, holds her iPad while surrounded by her art pieces in her studio on March 10, 2022. (Abraham Fuentes / Xpress Magazine)

For 20 years, Bud Snow has wanted to do only one thing: create art. In the last few years, she decided she wanted to pursue public murals, but she had one issue: funding. Then, in March of last year, inspiration struck.

“It dawned on me to fund my public art using NFTs,” said Snow, an Oakland-based contemporary artist.

NFTs, otherwise known as Non Fungible Tokens, were invented in 2014 as a new way of buying and selling art online. Once somebody purchases Snow’s art as an NFT, she then goes into the physical world and paints their purchase as a mural. By selling them virtually, she is able to fund her public mural projects in Oakland.

“It’s kind of a win-win for everyone; the artist gets paid, the collector gets to fund public art, and then there’s public art in the world for people to see and enjoy,” Snow said.

This is just one of the many ways that NFTs can be used. In simple terms, it is a secure way for people to store and sell their physical items online. Before NFTs, online art could easily be copied, reused and reuploaded without credit. NFTs prevent this because they contain a permanent and secret digital code that allows the original creator to authenticate their work.  Technically, almost anything stored as data online can be turned into an NFT, including art, music files and property listings.

Since they began to gain traction in 2021, NFTs have been a hot topic of debate. Some artists, like Snow, have claimed that NFTs are a way to generate wealth and create opportunities. While others believe that they are more harmful than helpful. 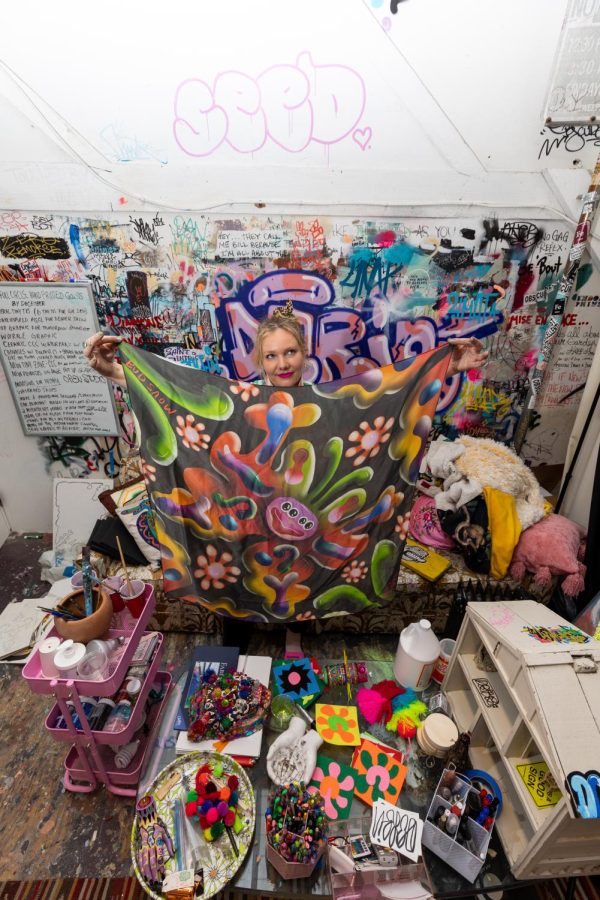 Gallery|2 Photos
Bud Snow holds a physical version of one of her NFTs in her studio in West Oakland on March 10, 2022. (Abraham Fuentes / Xpress Magazine)

“You own the provenance to your work, so when you sell an NFT, it’s logged on the blockchain, and that is a public ledger that’s reported permanently,” she said. “Unless the internet dissolves, we’re always going to have proof of ownership, a kind of authenticity of creation made for each piece. It’s really putting a lot more power in the pockets of the artist.”

The blockchain is a decentralized database invented alongside Bitcoin in 2008 as a digital ledger to record currencies’ transactions. Blockchain technology is considered far more secure than traditional centralized databases — which is partially what has given cryptocurrencies like Bitcoin their value.

“I don’t see it as distracting away from the contemporary art scene. I think it is building on it, and it’s creating new avenues for artists to create new types of work,” Snow said. “So I think it’s a really cool thing that’s happening, and I’m happy to be alive for it.”

As the realm of NFTs develops — with over four million people in the U.S having bought or sold an NFT as of June 2021, according to security.org, a technology product and concept review and research site — so does the opinion of them for other Bay Area artists like Andre Jones, aka Natty Rebel.

The Bay Area Mural Program Executive Director and Oakland-based mural artist believes NFTs to be “more hype than anything.” In the beginning, he wanted to jump on board because it seemed to be a great opportunity for artists to take control of their distribution and ownership of their art.

“I feel like a lot of the big hype behind the big sales and NFTs are already people who have money that are creating hype. I hate to say it, but it’s almost like a Ponzi scheme,” Jones said.

Once the owner of an NFT sells, the new owner can then resell it. However, they don’t make the entire commission since the original owner takes a predetermined percentage. Each time someone resells, the original owner continues to make money off of it — a system that some point out is reminiscent of a Pyramid Scheme or “Ponzi Scheme.”

Jones and the Bay Area Mural Program have used NFTs to host workshops on the topic to get artists and people through their doors mainly. He said it sparks other types of conversations about murals, fundraisers and more from initially discussing NFTs in the creative space. Jones was put off selling his art as NFTs when the digital marketplace he was using, Hic et Nunc, crashed. Jones had lost his pay, his profile, and any of the NFTs he sold.

There are no checks and balances,” Jones said. “It can just disappear into the Metaverse, and there’s nobody you can call. If you forget your Meta wallet password, you have no access to your money. There’s no 1- 800 number where you can call somebody and be like, ‘Hey, I forgot my password. Can you reset it?’ There’s none of that.”

Jones also criticized the lack of representation and access for people of color. He said that he hasn’t seen any people of color who have created or fully benefited from NFTs.

San Francisco-based graphic designer Kevin Sandoval has had his focus on the future of NFTs and the reactions they have invoked within the art community.

“Why wouldn’t you want people to be able to receive the fruits of their labor? I’ve been in the art world for a long time, and I see it all the time. Artists are always mad at other artists for being successful, and it’s never made any sense to me,” Sandoval said. “Artists are out there suffering, and there’s this idea that suffering is virtuous. I think that’s a huge problem.”

Though he hasn’t used NFTs personally, he feels confident that a lot of people who are mad about the situation will have their own work up on these platforms within a year. He mentioned that he might even upload some of his own work in the future.

Sandoval saw instant similarities between the transition towards NFTs and the digital transition in the early 2000s. He said that many artists were apprehensive about uploading their work online because they didn’t understand it. He saw the advancements in the art world as opportunities for artists to set themselves up for future success.

”I think we’re having a really tough time coming to terms with what having digital assets means,” he said. “Don’t just see these and get mad at people for getting money, first off. That’s ridiculous… If you’re going to have a take on something, do some diligence on it.”

Not all Bay Area artists are rooting for the use of NFTs. San Francisco-based illustrator, Marvin Velasco, is one of those that are against them.

“I actually spent a lot of time trying to get on it early, and a lot of these things were invite-only,” said Velasco, who applied to be a part of NFT markets in the beginning and waited several months to be accepted. “I’m glad it took that long. If I had made one that early, I wouldn’t have been too happy with it. My opinion has changed so much.”

One of Velasco’s biggest concerns was about online privacy and security. He thought the use of a decentralized network was a good idea because it gave people the opportunity to stray away from the control that banks and institutions have on money, but once people started losing their funds and there was no support system, his opinion began to change.

“Anybody could send you anything, and you click on the thing, and it’ll just wipe out everything that you own. All you need is the person’s wallet serial number, and you can put anything you want into that person’s wallet,” he said.

Another big concern for Velasco was about the culture. He goes as far as calling the NFT culture “toxic.” To him, it seems more about promoting mass-generated art so people can “buy into the club” and gain credibility amongst their peers and supporting artists.

Selling NFTs online, as some have said, shares a similar dilemma that many artists have dealt with when selling their work in art galleries or exhibitions. This dilemma is people who aren’t the creators being in charge of how much their art should be sold for, leaving the artists stuck with whatever others believe their art is worth.

He mentioned that the best way to support artists is to not only ask them how to support them but also to purchase something from their stores.

“I personally like it when someone asks me to do something for them, and I could send it over and mail it over and stuff like that; something physical so they can have it.” Velasco said, “Whenever things like this happen…here’s always a sense of the fear of missing out. Just really do your research and don’t go around throwing money into a speculative market.”