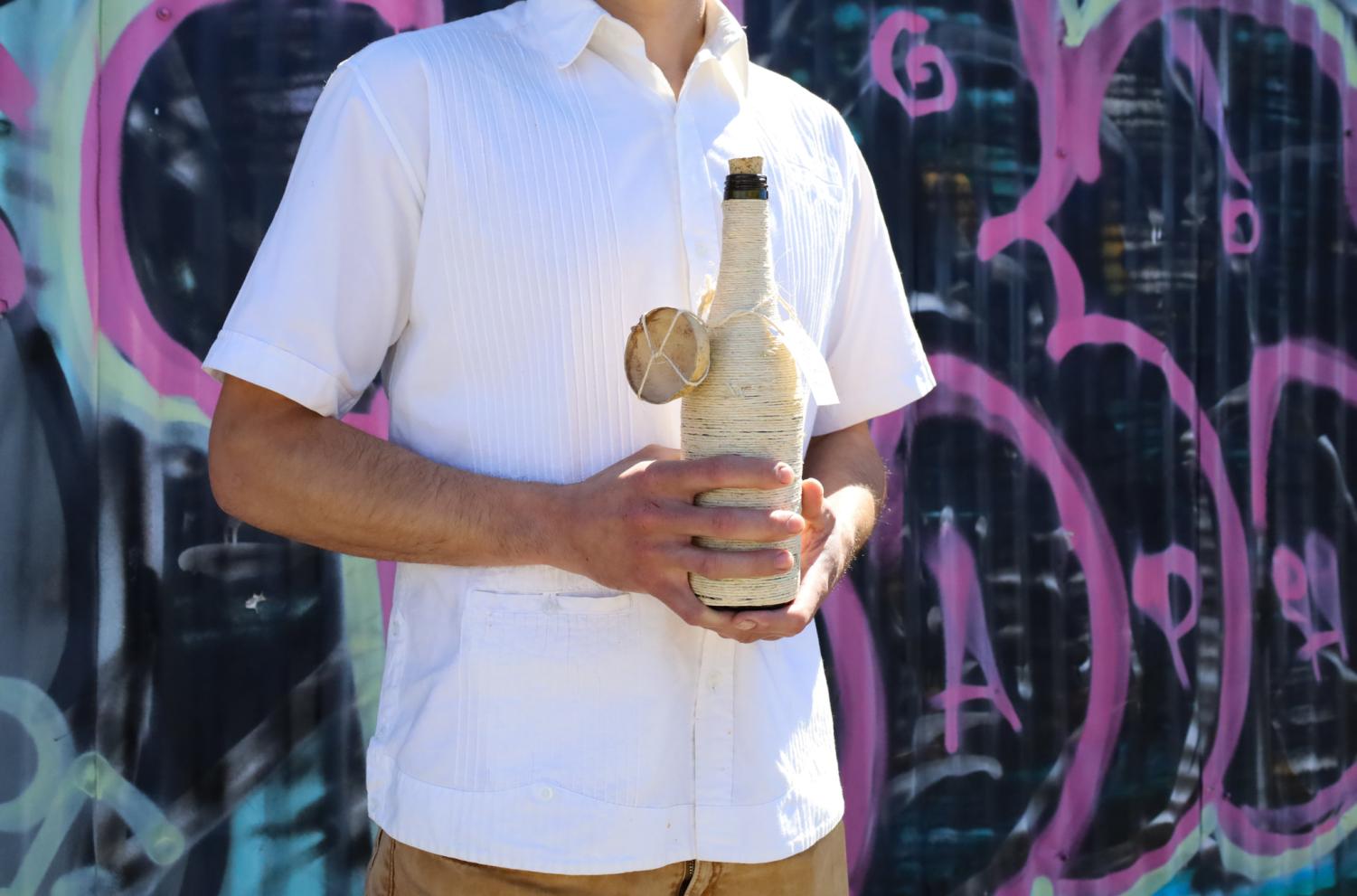 Alex Gómez Uribe, a Jalisco native, holds a bottle of mezcal from Mezcal Totoy in Oakland on March 11, 2022. The contents in the bottle were produced by Antonio Leon, a “Maestro Mezcalero” and the maguey used to make this particular mezcal was Jabali. (Bianca Heredia / Xpress Magazine)

Alex Gómez Uribe, a Jalisco native, holds a bottle of mezcal from Mezcal Totoy in Oakland on March 11, 2022. The contents in the bottle were produced by Antonio Leon, a “Maestro Mezcalero” and the maguey used to make this particular mezcal was Jabali. (Bianca Heredia / Xpress Magazine)

More Than a Trend: Mezcal Finds a Home in Bay Area Bar Culture

Jamie Bernal smiles as he points out the menu located behind his bar. Written in chalk, it reads, “agave cocktails, with tequila or mezcal,” but that menu read differently five years ago. He’s still serving up margaritas but switching out the tequila for mezcal.

“We have what we call a speed rail, which is the bottles we grab most frequently. Mezcal has never been there…now mezcal is in the speed rail,” said Jamie Bernal, owner of the Oakland bar, Room 389.

The bar is located on Grand Avenue and opened in 2010. Bernal said that when his bar first opened, the popularity of mezcal was nowhere near that of what he calls ‘the big five’ spirits: whiskey, gin, vodka, rum and tequila. That is until roughly five years ago.

In 2009 and 2010, U.S. mezcal imports averaged about $1.8 million per year, according to U.S.  Department of Agriculture. Since then, imports rose on average $7.8 million, reaching a total of  $85.6 million yearly imports for 2021. In bars all over the Bay Area, the spirit is all over menus. It’s become so popular that Bernal is working on his own mezcal-speific menu.

Mezcal is known for its earthy, smokey taste—which comes from smoking the agave in ovens that have been dug in the earth. The taste of mezcal can vary depending on the agave used and whether the mezcal is distilled in copper or clay pots, wooden barrels or animal leather.

Technically all tequilas are mezcals because mezcal refers to any spirit produced from the fermentation of agave, according to Dr. Abisaí José García Mendoza, an expert in taxonomy of Agave from the National Autonomous University of México.

However, colloquially, the term mezcal is used to describe the product made from agave smoked in underground ovens, unlike conventionally known tequila, which is cooked in masonry ovens above the ground and further processed in stainless-steel stills. These are some key elements that distinguish mezcal from tequila and the use of wild agave in mezcal production versus cultivated agave azul, which is commonly used in tequila making.

“When you’ve tasted various of the two types [industrial and artisanal mezcals,] you can feel the taste of the copper. Even the producers who distill in copper tell us that they love the taste of the mezcal distilled in clay pots,” said Alex Gómez Uribe, an Oakland resident and one of the business partners in Mezcal Totoy.

Now patrons of Room 389 are ordering drinks traditionally made with tequila and replacing the spirit with mezcal instead. One of those drinks is the classic Paloma cocktail, which is usually made with tequila, squirt and grapefruit. Bernal said the bar’s most popular drink in the last couple of years is their signature Hibiscus Mezcal.

“We take dry organic hibiscus flowers and soak them in a big vat of mezcal for days. It gets a really rich color, and we use that to make a margarita base essentially,” he said.

His niece, Camellia Bernal, has been working in her uncle’s bar since 2017 and said that her customers keep ordering mezcal or replacing tequila in drinks for mezcal. At first, Camellia thought it was just a trend, but after working for five years at her uncle’s bar, she said that it now seems to be commonplace in other bars.

“I go to a few different bars around here that have a bigger selection. When I go to those bars, they’re able to give me more information on exactly what each thing [mezcal] is,” Camellia said.

Both of these spirits were designated with an appellation of origin, which means that in order for these to be considered authentic tequila and mezcal, they must have been completely produced in the geographical area designated by the Mexican government.

This is meant to protect the production of these traditional spirits. The same way that Champagne can only be produced and labeled as such if it is made in the French region of Champagne, and that Parmigiano Reggiano cheese must be produced in the region of Emilia-Romagna, Italy.

As of October 2021, the states that account for the name of origin are: Guerrero, Oaxaca, Durango, San Luis Potosí, Zacatecas, Michoacán, Guanajuato, Aguascalientes, Morelos, Puebla, México and specific municipalities in the states of, Tamaulipas, and recently Sinaloa, according to a resolution by the Mexican Secretariat of Internal Affairs.

“I feel that there is a lack of cultural knowledge about how to drink mezcal…because there’s so much culture and tradition behind mezcal. Every place that distills mezcal has its own story,” said Fredy Chávez, a master mezcalero and founder of the mezcal brand Totoy, from the Sierras of San Pedro Totomachápam in Oaxaca, México.

Chávez produces his artisanal mezcal in his palenque, a place where mezcal is produced, that’s located in Totomachápam. His town has been producing artisanal mezcal for centuries and where tradition has been handed down from generation to generation. His great grandfather was a shaman, a spiritual healer in Mexican culture, and began making mezcal for medicinal use. Mezcal is used in some rituals as a healing remedy.

Mezcal Totoy began in 2021 and uses wild agave or maguey that grows in the mountains of the community of Totomachápam. Sometimes the people who search for the wild agave have to carry it on their backs because the horses and donkeys can’t make it to where the agave is found.

Then they take the agave to the palenque, which is the place where the master mezcaleros shred the agave by hand in a wooden canoe, ferment it and turn it into mezcal. Chávez hopes to one day export his mezcal and expand his brand in the Bay Area. Gómez Uribe is tasked with promoting the brand in the Bay and was roommates with Chávez in Alameda back in 2014 before Chávez moved back to Oaxaca. 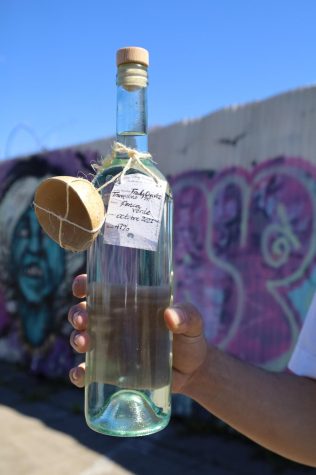 “I’d like to see mezcal reach the best top kitchens so that people can value what mezcal is,” said Chávez. “I compare it with the best whiskey or cognac, and I think mezcal has that potency and potential.”

The craving for mezcal in the Bay Area continues to grow, but it could have environmental consequences. García Mendoza, an expert in agave taxonomy, gave a presentation on the history, uses and environmental impact of agave in México on April 24, 2021. He explained the risk of having a high demand for agave products.

Agave takes a long time to mature. As a result, the plants are often cut before maturity or are cultivated in monocultures — large plantations of the same species of plant that are often used for industrial tequila and mezcal production, according to Mendoza. In monocultures, the soil loses fertility over time and can decimate other plants and agaves.

However, artisanal mezcal is not necessarily more sustainable as it relies on wild agave that has to be harvested.

“The whole world wants to sell mezcal. We need to be careful with the loss of wild agave because there are people who cut them but don’t continue to cultivate them. That can lead us to the loss of some of the species,” said Sindy Silva, who is also a partner in Mezcal Totoy and lives in Oaxaca.

Mendoza, who has been studying agave for over 30 years, also touched on the issue of wild agave harvesting. He warned that people should be careful with the over-exploitation of agave if Mexico wants to continue to have this plant as a national and cultural heritage. Wild species have begun to disappear, and there has been a large transfer of agave outside of their area of origin, according to Mendoza.

The positive impact leaves Gómez Uribe feeling caught between emotions. He, along with his partners, understand the environmental impact that the high demand in mezcal is causing. He also knows that the people who produce mezcal are protecting their heritage and traditions as well as feeding their families.

“The truth is that for the people, [mezcal production] is often the only way that they can progress,” said Gómez Uribe.

Steven and Emily Sadri opened their specialty shop Tahona Mercado in February of 2021. The married couples’ shop is located in the San Francisco neighborhood Nob Hill and offers an array of agave spirits and specialty Mexican food products, as well as sandwiches, quesadillas and more.

“The pandemic hit, and it was really rough. We wanted a better way to support all the producers of mezcal who were reaching out asking us to buy batches,” said Emily Sadri.

Together with business partner Marsilio Gabuardi, they want to offer a platform for the mezcaleros to showcase their mezcal. The Sadris opened their first restaurant Tahona in San Diego three years ago. They also opened Tahona Baja in Ensenada, Baja California and another Tahona Mercado in Tijuana.

“The idea between all these locations is that it’s all synchronized together, it’s all about sharing the same story,” said Steven Sadri. “We truly believe every one of these producers that we stand behind, all these beautiful bottles that you see should be having their story told every single day.”

Mezcal and agave are important symbols in Mexican culture. They are present in moments of joy, sadness, birthday celebrations, job promotions, graduations, weddings and funerals.

“This is a platform where we get to present not only mezcales, tequilas and Mexican spirits, but we are also a platform for Mexican wine and hyper-local products,” said Gabuardi. “It basically allows for anyone of any background to come in here and have a Mexican experience.”