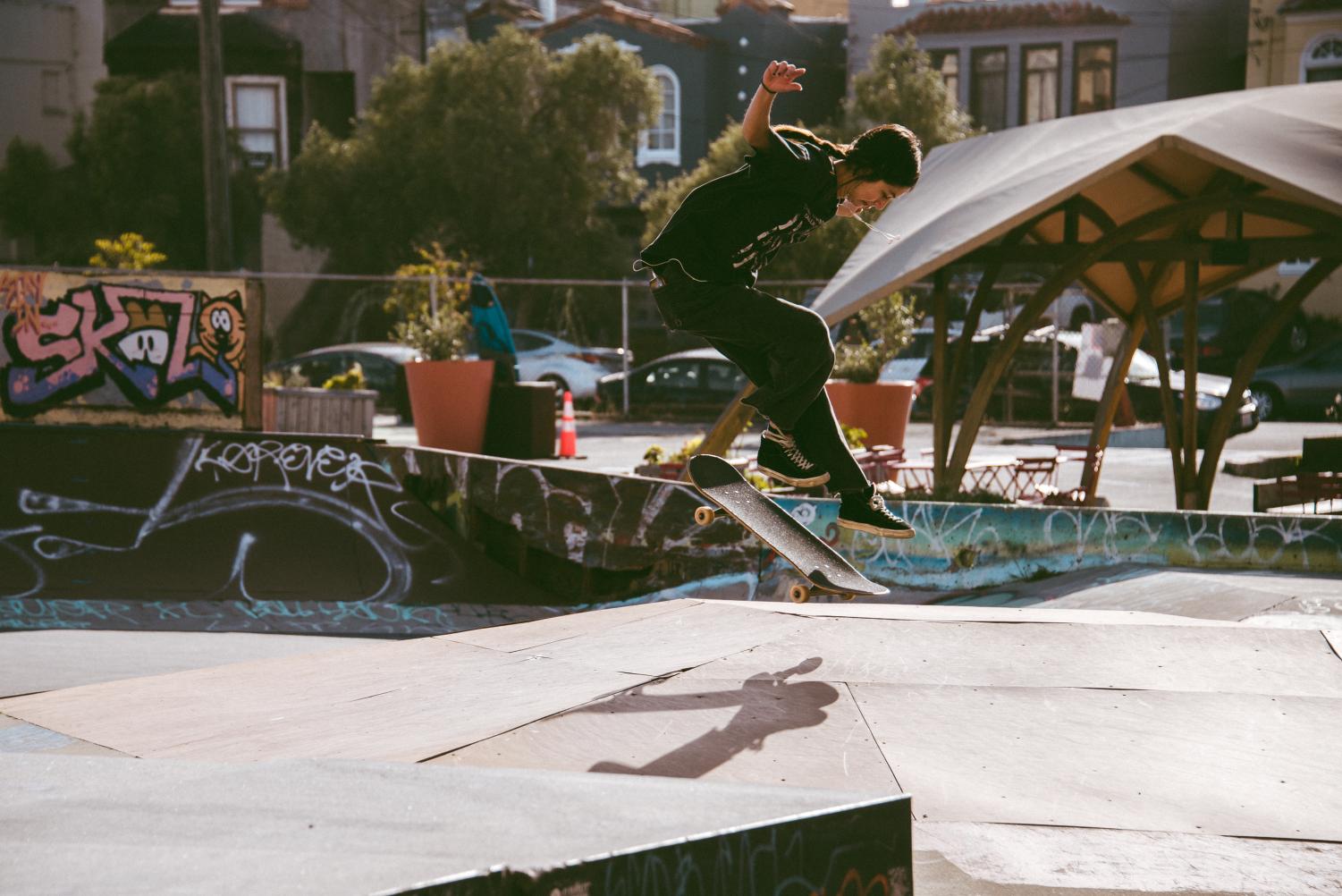 Skateboarding in San Francisco: No Longer a Man’s World

Every time Layla Smith steps into a skate shop, she feels invisible. The men behind the counter often fail to recognize her as a fellow skateboarder, let alone as a customer.

“If I’m with a man…no words to me at all,” said Layla Smith, a female skateboarder living in San Francisco.

Smith started skateboarding at the beginning of the pandemic after watching her best friend find their passion for the sport. She was hooked after her first session. But it wasn’t just riding the board that sparked her love. Through skateboarding, Smith found a sense of community, a new friend group and freedom from self-criticism.

Layla Smith does a rock ’n’ roll on a quarter pipe at Potrero skatepark in Potrero Hill on March 29, 2022. A rock ’n’ roll is a skateboarding maneuver where the front truck goes over the coping and turns 180 degrees as the skateboarder goes back down the ramp. (Garrett Isley / Xpress Magazine)
(Left to Right) Angelica Rodriguez and Layla Smith wait for their turns to skate at Potrero skatepark in Potrero Hill on March 29, 2022. It’s common etiquette in skateboarding to take turns in a rotating order so as to not “snake” anyone. (Garrett Isley / Xpress Magazine)
Layla Smith does a backside boardslide on a repurposed parking curb to warm up at Potrero del Sol in Potrero Hill before entering the skatepark on March 29, 2022. Smith began skateboarding a year ago because her best friend started getting into the sport. While she always loved skating and watching skateboard videos, she never had the confidence to give it a shot herself. (Garrett Isley / Xpress Magazine)

But young women like Smith often feel they have to fight for space at the skatepark and for basic respect from their male peers — respect handed much quicker and easier to the men entering skateboarding.

Angelica Rodriguez, a 21-year-old skater living in San Francisco, said that she doesn’t skate that often these days because she feels that men don’t believe she skates for the “right reasons” — in other words, that she’s only skating to pick up men, not to learn and progress.

“I feel like I constantly have to prove myself,” Rodriguez said. “When [a guy] is a beginner, they don’t call [them] a poser. When a girl is, they call them a poser.”

Rodriguez started skateboarding during high school in Southern California after her older brother came home with a board from Walmart. Eventually, her brother found more interest in video games but supported her skateboarding from the sidelines. Her brother’s encouragement played a significant part in her pursuing the sport, serving as an outlet during her parent’s divorce.

“At skateparks, these guys try to snake you out, try to push you out of places because we’re learning,” said Smith. “But I’ve always felt really welcomed by a lot of men, and that’s really comforting when there are not men trying to mansplain when they’re just supportive. There’s a huge difference.”

Skateboarding has seen an increase in popularity over the last decade, and as a result, there is an increasing number of women beginning to skate. Two of the last seven Thrasher magazines featured women on the cover. Before that, only three of the 489 issues since 1981 gave women the cover spread.

Despite being a sport born out of a community of outcasts, skateboarding is still plagued by a culture of otherness and exclusion. Thirty years after the explosion of skateboarding, women and other marginalized communities are still fighting for their space in this male-dominated community.

The first openly gay mainstream professional skateboarder, Brian Anderson, only came out in 2016, despite a two-decade-long career, most of which he was actively hiding his sexuality. This marked a turning point in skateboarding culture as it sparked a debate about the sport’s inclusivity.

And for skaters like Smith, seeing skateboarders like Breanna Geering on the cover of Thrasher and watching other women stake their claim in skateboarding solidifies her passion and outlook on the future of the sport.

“It’s so inspiring to so many people; to children, people who didn’t think they could skate,” said Smith. “I think it’s definitely on its way.”

Sophia Swigart and Rayann Elsarrag met in San Francisco during the pandemic and started skating together every day. They rarely go to skateparks alone and go as far as to avoid certain parks because of the atmosphere there.

“You never know who’s gonna get mad or be weird,” Swigart said. “There are skateparks that I specifically don’t go to because I feel judged there.”

Sophia Swigart does a frontside boneless off a ledge at Playland at 43rd skatepark in Outer Sunset on March 30, 2022. A frontside boneless is a maneuver in skateboarding where the skateboarder plants their front foot on the ground while grabbing the board with their hind hand, lifting the board in the air and rotating 180 degrees. (Garrett Isley / Xpress Magazine)
Sophia Swigart poses in her bedroom with her skateboard in Outer Sunset on Feb. 12, 2022. Swigart started skating in 2020 when she made the transition from roller skating to skateboarding as more of her friends pushed her to switch. (Garrett Isley / Xpress Magazine)
After the wind blew her beer over, Sophia Swigart decides to take a break from skating and finish her drink at Playland at 43rd skatepark in Outer Sunset on March 30, 2022. (Garrett Isley / Xpress Magazine)

Elsarrag said she often feels uncomfortable and unwelcomed from what she perceives as degrading stares that she receives from male skateboarders. Both of them have had negative experiences at skate shops as well. They no longer go to the shops in the city, reverting to online shopping for their skateboarding needs.

Despite the challenges, to Rodriguez and others, skateboarding is worth it for the friends they’ve made, the sense of community they’ve felt and the lessons they’ve learned along the way.

“It’s fun, though. I wouldn’t give it up for anything, I really wouldn’t,” said Rodriguez.