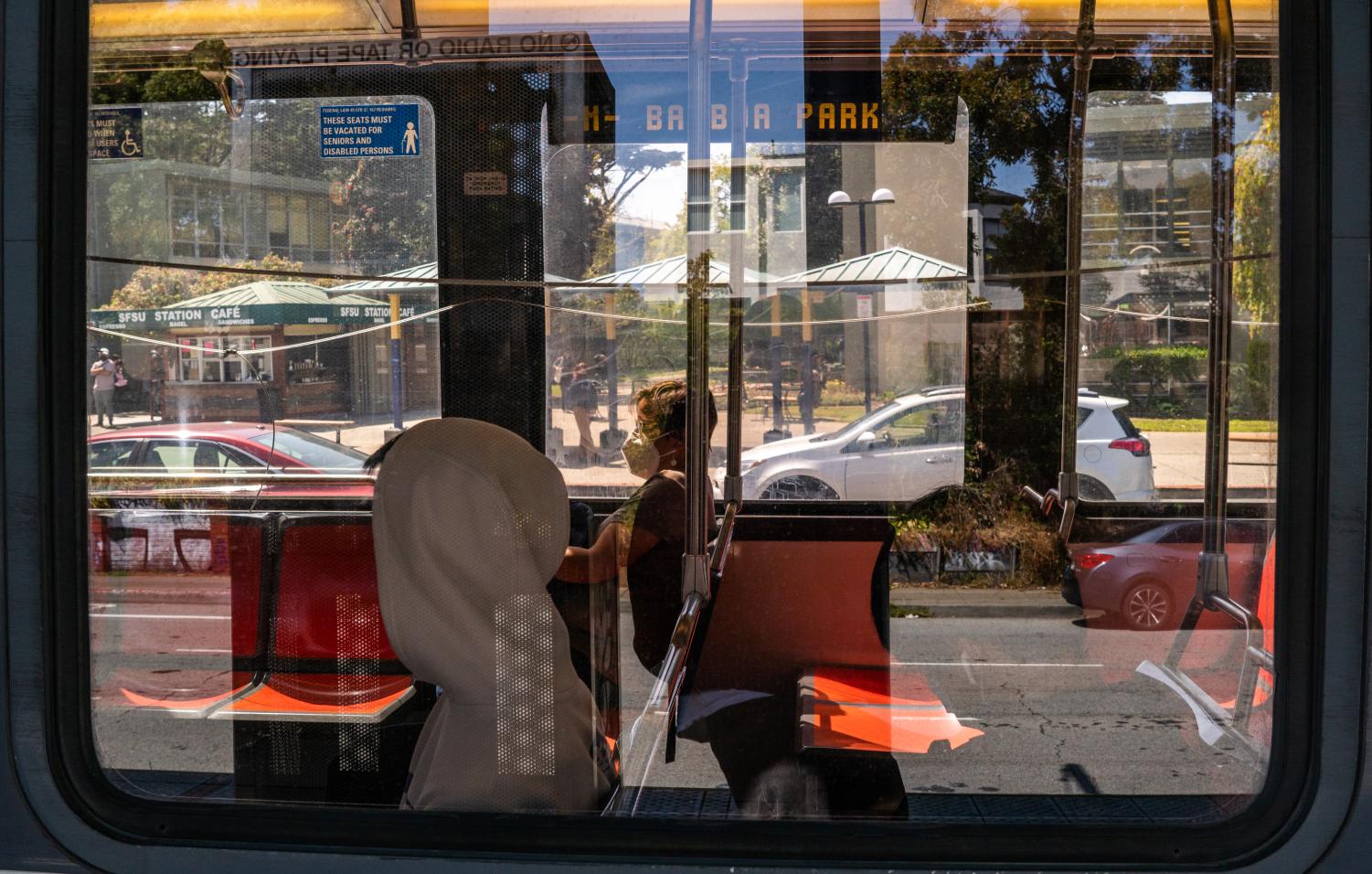 SF State transit benefits were expanded for students this year, but some students are still feeling left out.

Every day James Aguilar’s alarm blares at 6:30 a.m. A couple of snoozes later, he usually makes his way out of bed. He dresses warmly in preparation for the morning’s nippy weather when he walks to his bus stop in the wind, which is often worse than the cold. Once on the bus, he scans his Gator Pass, his ticket to ride.

Aguilar explained that waking up and commuting to school is a natural routine for him. He has been commuting to SF State from San Leandro for four years.

“I wake up, and almost as if time warped around me, I end up in the city an hour and a half later,” said Aguilar, the Associated Student’s (AS) chief justice.

The Gator Pass is a transit attached to the student ID. It currently works on Muni and certain portions of BART, both of which are the main services that SF State commuters take to get to school. According to John Gates, Interim Associate Vice President of Fiscal Affairs at SF State, between 14,000 and 15,000 students used their Gator Passes to travel on Muni during February and March. The Office of Fiscal Affairs estimated that 3,000 students are using BART on a regular basis to commute. But further expansions are being made to extend the accessibility of Gator Pass benefits to more students in more areas of the Bay. This is because the pass hasn’t always served all SF State students equally.

According to an official letter from the Student Fee Advisory Committee, an expansion of the Gator Pass will be implemented during the Fall 2022 semester. This expansion will provide SF State students access to unlimited rides throughout the academic year on San Mateo County’s bus service SamTrans without a fee increase. Based on a 2022 Associated Students Gator Pass survey, 95.4% of 1,220 surveyed students were in favor of expanding the Gator Pass to also include SamTrans.

This expansion is a trend of increasing benefits of the Gator Pass. Starting with its implementation in the Fall of 2017, it provided unlimited rides on Muni, and a 25% discount off BART rides to and from Daly City. In the Spring of 2019, the Gator Pass discount with BART went from 25% to 50%, and the upcoming expansion does not reduce any of the previous benefits.

The Gator Pass is not free, however. In the Spring of 2022, students paid  $180 in mandatory student fees for the pass. According to SF State’s 2022-2023 Academic Bulletin — which details rules and policies for students — the Gator Pass charge is similar to other mandatory fees students already pay, such as the Student Health service fee of $239 and the Student Body Center fee of $82.

Elizabeth Snedaker, a fourth-year SF State student who commutes from Daly City, said she likes the fact that the $180 Gator Pass enables students to ride Muni lines for no extra charge and BART rides at a considerably lower price. Snedaker said she gets overwhelmed by the many fees, including public transportation, that come with being a student.

“[The pass] helps me by taking one of those stressors away,” said Snedaker. “I know that every time I scan my Gator Pass, I’ll be okay, and I don’t have to pay for each and every time I ride the bus.”

Janiel Martinez commutes from Pleasanton, which according to him, is a 30- to 40-minute commute by car. However, he prefers using the Gator Pass to pay $3 each way for BART. Martinez said that gas prices, along with the traffic, are what keep him commuting by public transportation. A choice, he said, is easier on his wallet, making other options such as driving unappealing to him.

Tiana Harper said she is happy with the program as-is. She said she takes BART from Pittsburg when commuting to campus and spends about $7.25 a day, including $3 to park at the station. The bill comes out to approximately $30 a week, which includes traveling to campus four days a week.

“As a full-time student with no job, having the one card and the discounts make the semester significantly less stressful,” said Harper. “I can rely on my financial aid for transportation, and I don’t have to pay anything out of pocket due to the 50% BART discount and free muni rides.”

Aguilar said the upcoming expansion of the pass is very beneficial to students commuting from various places down the Peninsula, such as San Mateo, Millbrae, San Bruno and San Jose.

“I think the East Bay is covered, and a lot of [the] North Bay is covered, but it’s just about that South Bay and even Marin County that we need to work on. And I think that’s super important,” Aguilar said.

He explained how AS worked to lobby for transit discounts with agencies such as SamTrans. Last year, while Aguilar was the AS director of government and community relations, he did advocacy around transit with state legislators, transit board members, and even members of Congress.

“[I] briefly lobbied some of the BART board members,” Aguilar said. “That work, I would say, was definitely hard as the relationships I built were nonexistent with AS before.”

While the AS survey said that implementing the expansion with SamTrans was popular, there are still students wanting greater coverage. Nyssa Fraile Johnson travels an hour and 30 minutes every day from Antioch to Daly City when commuting to SF State. Her daily train ride to and from school costs about $16. Fraile Johnson said that if she goes to Daly City, then she has the 50% discount from the Gator Pass but if she does not stop at Daly City, her fares for the day total up to $32.

“It really impacts me because I don’t have a job, so having to use BART every day really adds up over time, especially since I’ve been doing it for two semesters so far,” said Fraile Johnson. “I like the idea of the Gator Pass, but I wish that the discount would be for every BART station. I feel they could add more options, especially since this is a commuter school.”

Fraile Johnson would like more flexibility with the Gator Pass system because she believes there are more convenient ways to get to SF State beyond the Daly City station, depending on where in the Bay the commuter comes from.  For her, getting off at Balboa Park, only one stop before Daly City, is more convenient because it has a direct light rail connection to SF State. But if she gets off at Balboa Park, her BART fare will cost an extra $6 because the Gator Pass discount only applies to those who get off at Daly City. Fraile Johnsons said that sometimes she has to choose between not getting to class on time or losing the 50% discount on BART.

“I definitely think they should expand that or make the discount cheaper because I commute every day, and honestly, it really adds up, especially since I don’t live close or on campus,” Fraile Johnson said.

“That’s another big problem because instead of getting that 50%, you’ll end up spending $10 full-ride and adding up — that’s crazy!” Aguilar said.

He sees the development of the Gator Pass as an evolutionary process molding itself through student feedback and breakthroughs with its various partners.

“Just thinking of those broader issues, I get frustrated because I ask myself, ‘Why can’t the state just see this?’” Aguilar said. “Why can’t we get what we need as students and working people through the Bay Area?”

Gates does not actively use his Gator Pass to get to school. He said he lives relatively close to campus, but neither Muni, BART, nor SamTrans has a route that would get him to work faster than his car. He would otherwise have no problem using public transportation.

“It would take me twice as long to commute via Muni as it would to just drive,” Gates said. “I used to take Muni all the time for my old job but given where I live and the Muni access right now, driving just makes a lot more sense. And I have a fuel-efficient car.”

Aguilar sees the ability to create change over time as a matter of political willpower.

“If our vision is to get students where they need to go in their academic, professional, and personal lives, then we need to make it happen,” Aguilar said. “If we make it happen, we make a substantial investment in our economy and the lives of students.”