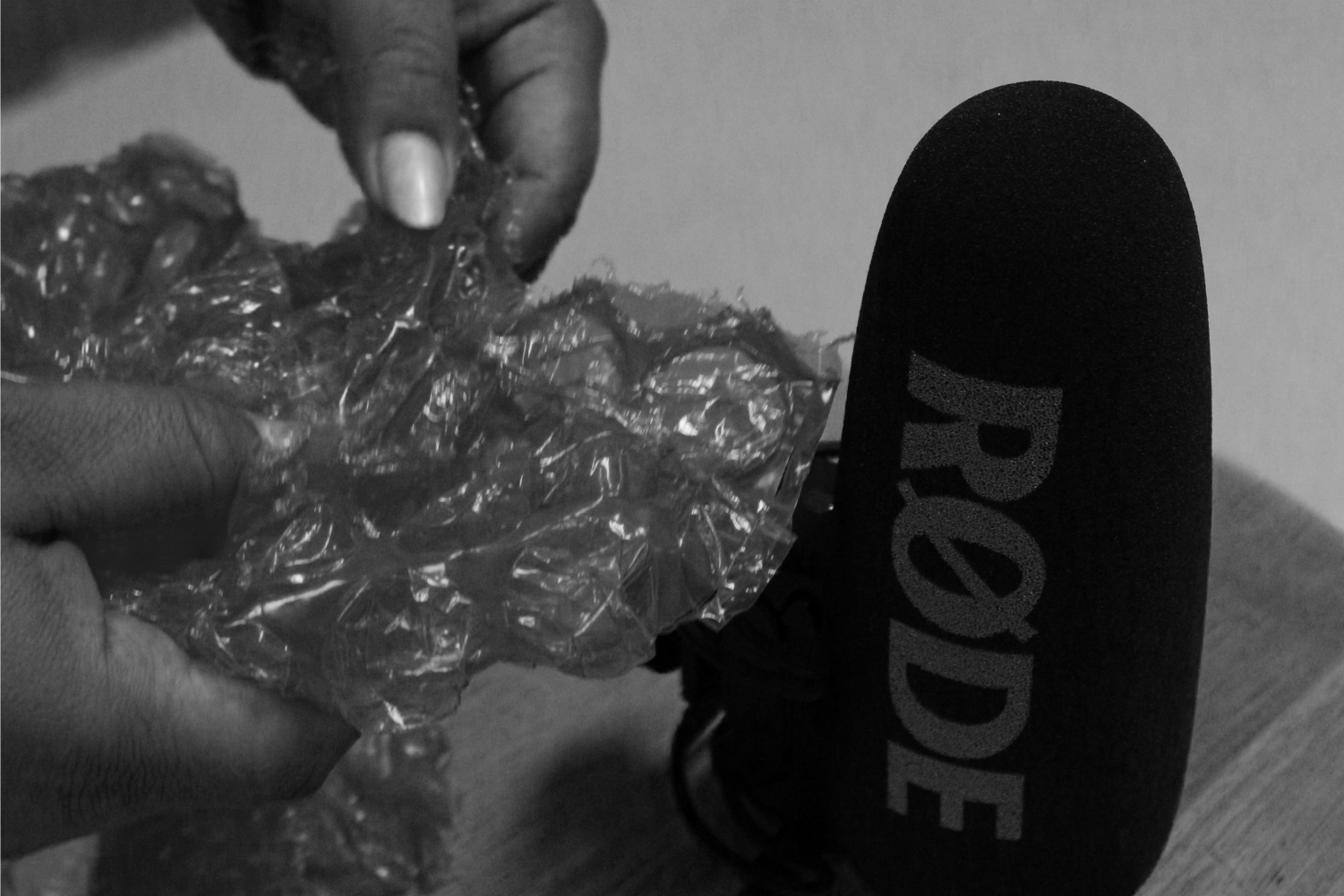 A photo of a person popping bubble wrap in front of a microphone on May 9, 2022. (Xpress Magazine / Paris Galarza)

A photo of a person popping bubble wrap in front of a microphone on May 9, 2022. (Xpress Magazine / Paris Galarza)

Why do People Love ASMR?

How a new genre of content is providing euphoric relaxation for the masses.

Long nails lightly tap against a microphone, the sound of cards shuffling as fingers slowly graze each card in the deck. These are just a few of the noises that send waves of tingles down Mia Tikka’s head and spine as she enters a state of pure relaxation.

“I started watching ASMR videos around 10 years ago,” said Tikka, an active consumer of the ASMR community on YouTube. “I just love how the tingles feel. They make me feel relaxed, and it helps me concentrate better.”

ASMR stands for autonomous sensory meridian response, which is described as a tingling sensation sparked by a particular sound and is felt mostly on the scalp and along the back of the neck. The tingling sensation has led ASMR consumers to call the experience a “brain orgasm,” which is described as a euphoric feeling of relaxation. Jennifer Allen, a manager for a cybersecurity company in New York, first coined the term in 2010, when she started an online forum to find out if there were other people out there who also experienced these sensations when hearing specific trigger sounds. Although the term refers to a reaction of the body, ASMR is colloquially used to define a genre of online content that induces the response.

ASMR can be induced by physical touch as well as visual and aural stimulation, although the most well-known form of ASMR is auditory. The experience can trigger the exact stimuli in the brain region that involves emotion and empathy and can be activated by whispering, tapping, carving, scratching, mouth sounds and massages. Over the last 10 years since the term was coined, ASMR has exploded throughout the internet, with ASMR being the second most popular searched term on YouTube. Many people, like Tikka, have turned to ASMR as an outlet to help reduce their anxieties and stresses and to correct bad sleeping patterns.

According to the study “Coping with COVID through ASMR,” when the pandemic hit the United States in March 2020 and forced everyone into their homes, thousands of people started to cling to the sounds of soft whispers and trigger sounds to provide comfort in a time of social isolation. The study found that people turned to ASMR as a form of escapism from the bombarding news updates concerning COVID-19. With the troubling times creating more stress and anxieties, ASMR content helped reduce the pressure of negative mental health. 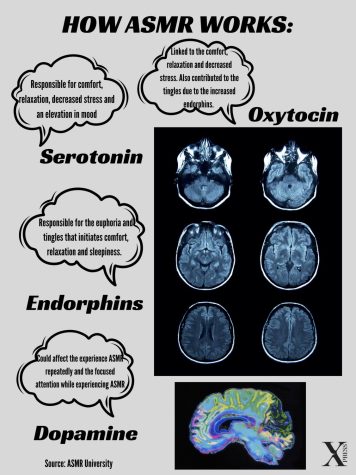 Before the term ASMR and content creators, aka ASMRtists, were purposely creating videos of calming triggers, the tingles were an unknown phenomenon people would experience, but they never had a way to describe it accurately .

In 2009, Mateo Felix was under an immense amount of stress as a college student, and he remembers trying to seek out different forms of meditation to cure his overly anxious mind. While searching through the internet for an answer, he came across a whispering channel on YouTube. Desperate to try anything, Felix clicked on an 8-minute video by the username WhisperingLife and was instantly soothed to sleep, listening to the soft whispers of the channel creator reading a book.

“It’s honestly not a stretch when I say that video changed my life,” said Felix. “I used to have such a hard time falling asleep, and listening to those whisper videos just made me feel so relaxed and helped me unwind after a long day. This was before ASMR had a name, so I really didn’t know what it was that I was feeling.”

The Youtube creator, WhisperingLife,  is credited as one of the first ASMR content creators, according to research from ASMR University, a website dedicated to the art and science of autonomous sensory meridian response. Since the term ASMR did not exist yet, those videos were referred to as only “whisper videos.” According to YouTube data, there are over 5.2 million videos that relate to ASMR and over 11 million global searches every month for ASMR.

While YouTube was the main social media platform that helped ASMR become more accepted, TikTok has been another source for ASMR that continues to help keep it in trend. On TikTok, the hashtag for ASMR has over 324 billion views which are packed with content. Within the last few years, ASMR has gone mainstream, being showcased in the popular HBO series The White Lotus. In the second episode of the show, two of the main women characters participate in ASMR. The small scene focuses on the girls relaxing and listening intensely to the sounds of a flicking lighter, deep breaths, the rattling of a pill bottle and slow crunching sounds.

ASMR researcher, educator and author of “Brain Tingles,” Dr. Craig Richard, explained on the ASMR University website that the reason that people find ASMR so relaxing is that these types of videos are not making any threatening movements or sounds, which allows your brain to stay calm and focus exclusively on the sounds that trigger the individual. Richard also mentioned that there are three major trigger categories: auditory, visual and tactile. For new ASMR fans trying to find out what helps induce these triggers, listening to trigger assortment videos that are full of contrasting sounds is useful in helping pinpoint the triggers that promote the greatest sense of relaxation in the individual.

“I tend to fluctuate between the triggers that work best for me, but I would say my go-to is probably the sound of tapping against wood or glass. That really just soothes my soul,” said Tikka.

While many people in the ASMR community have found comfort in these videos, a lot of people are not affected at all by ASMR.

A 2018 peer-reviewed scientific journal study from PLOS ONE recorded psychological responses in individuals who said they had experienced ASMR and responses from individuals who have not experienced it. The study found that the ASMR group of people displayed reduced heart rate and skin conductance, commonly referred to as chills or goosebumps. The other group did not experience any significant changes, with some even growing agitated from the sounds of the ASMR videos. The study discovered that ASMR promotes relaxation and comfort. It also concluded that ASMR does affect regions of the brain that are closely associated with emotional arousal, similar to the feeling of interacting with a loved one or a close friend.

While there is an abundance of videos that are specifically meant to trigger stimuli for the brain, Richard mentioned that there are also unintentional ASMR triggers. These triggers are created by accidents that one can experience in daily life. One of the most well-known accidental triggers people experience is when they get their hair cut. This is a real-world example of an unintentionally created response for ASMR.

It has been recently noted by Richard and other various ASMR studies that Bob Ross’ painting videos were also evidence of unintentional ASMR. Bob Ross is famously known for his instructional videos called “The Joy of Painting,” where he would enlighten viewers on different techniques used for landscape oil paintings. Each 30-minute episode was filled with getting lost in the serene process of watching Ross turn blank canvases into detailed paintings that consisted of trees, clouds, mountains and lakes. While painting, Ross’ gentle voice would give meaningful life advice and share his own personal experiences. Unintentionally, his videos induced effects of ASMR for viewers.

“I grew up watching Bob Ross, and I enjoyed the tingly feeling his voice gave me. His soft-spoken voice, his love for animals and painting and his overall positive attitude made him such a joy for me to watch,” said ASMR fan Jim Morris. “I didn’t really know what ASMR particularly was, but I would always feel that tingle sensation when watching his videos which helped with my insomnia.”

Morris always had issues when it came to falling asleep. It was Bob Ross who made him go into this unknown ASMR chase. A few years ago, he stumbled upon various ASMR channels and was reunited with that tingling sensation he once felt when watching Ross’ videos. To this day, Morris will still find himself tuning into his favorite Bob Ross videos whenever he wants to feel that comforting relaxation that helped him fall fast asleep as a child.

Although research is still fairly new on ASMR, there is building evidence that ASMR videos can be beneficial for an individual’s health. According to the academic journal “Autonomous Sensory Meridian Response (ASMR): a flow-like mental state,” these videos have proven that they are effective for individuals who experience insomnia, depression, anxiety and/or panic disorders. On the other hand, it is more commonly used as a way to de-stress and fall asleep. Research suggests that people who do experience ASMR have a specific personality trait tendency that is more immersive or open to experience, which is linked to empathy.

A February 2022 academic study, called “Untangling the tingle: Investigating the association between the autonomous sensory meridian response (ASMR), neuroticism and trait & state anxiety,”found that people who experienced ASMR — who had higher levels of neuroticism and general anxiety, or trait anxiety — displayed reduced levels of anxiety after watching a video. In contrast, the study found that people who have more moment-to-moment anxiety, known as state anxiety, did not experience any drop in anxiety after the video. The study concluded that ASMR could be a suitable intervention method for personalities that have high anxiety.

While ASMR enthusiasts swear by the calming, relaxing properties induced through ASMR, there are others who have an automatic negative response to particular sounds like loud breathing or chewing. The 2018 PLOS ONE study found that this condition is known as misophonia, which is when individuals experience intense disgust and anger when they hear sounds made by other humans. ASMR and misophonia have been described as two sides of the same coin because they both produce altered brain activity when triggered by specific noises, with ASMR showing more reduced brain activity than the latter.

After graduating college and entering the world of an uncertain future, Chelsea Rogers’ anxiety was at an all-time high. The 26-year-old had already had “severe issues with sleep,” where she would toss and turn all night, attempting to get just a few hours of solid shut-eye. The added pressure of extreme anxiety made Rogers’ nights even more difficult.

“I started slowly clicking on ASMR videos throughout the span of a couple of months, and I started to experience a very strong shivering feeling starting at the top of my scalp and going down my neck into my back. It was way too intense for me at first,” said Rogers.

Eventually, she started to listen to ASMR videos as background noise and would find herself getting so relaxed, that she would fall asleep at her computer. After uncovering more ASMR videos that dealt with sounds of carving and scratching, Rogers soon realized that whenever she would watch these videos, her anxiety would greatly diminish and her body would become more relaxed. Without ASMR, Rogers said she would most likely still be that “crazy anxious insomniac.”

“It helps me focus better, and it feels as if my mind stops racing as much when I’m listening to it. I think of it as sort of a constant and dependable stimuli that block out noises and distracting things in my environment. But most importantly, I can finally sleep,” said Rogers.