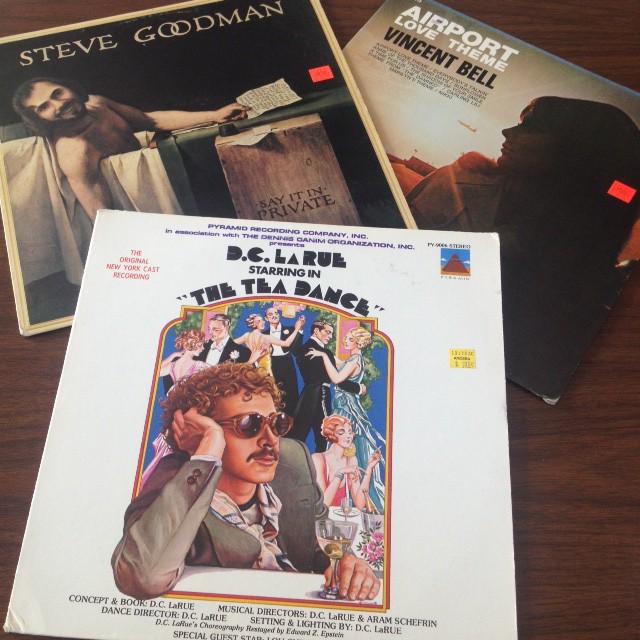 With the constant flood of new music and new musicians rising up and fighting for the attention of our ears, it’s hard to wade through the muck to find what most people consider, “good music.” Unfortunately, in most cases, some of these artists who are worthy of the title never make it far enough for a listen. If they were lucky at one point, they did not stand the test of time.

In the quest for good music, this column reviews the dusty, obscured, unknown, and forgotten that are found anywhere from gas station bargain bins and red-tagged crates stacked on the bottom shelves of record stores.

This week’s findings came from Amoeba Records in Berkeley.

If you’re an enthusiast of 18th century paintings depicting French revolutionary martyrs in blood-filled bathtubs like myself, then you would recognize the cover of “Say it in Private,” sort of. I say sort of because of a particular glaring difference from the original Jacques-Louis David’s “The Death of Marat”: the smiling bobbed-hair Lord Farquaad (of the Shrek franchise) with a goatee, in a bathtub, and with his eyes locked on you. I believe this is our boy, Steve Goodman, naked.

The lyrics are to the point, but kind of creepy. The first song, “I’m Attracted to You” leaves no room for imagination. Goodman lets it all hang out, and he sounds like a stage-five clinger. Here is the hook:

When I listen to the song, I imagine a booze-soaked, sexually aggressive Sean Connery gut-thrusting while seducing a circa 1980s Angela Lansbury. Combine that with the silky smooth saxophone solo, it is enough to make Angela’s granny panties drop through the floor.

But not all of the songs were strange. I was really blown away by, “My Old Man,” which is definitely the gem of the album. It brings to mind Kermit the Frog’s song “Rainbow Connection.” When you’re sad, alone, and really miss someone; this is your whiskey song.

Overall, I would say it was an interesting listen. Though his lyrics are awfully simple, and borderline creepy, his musical style fits the similar folk story-telling style of his contemporaries such as Harry Nilsson, Cat Stevens and Jim Croce. And not all of the songs were bad, it’s just that not all of them were good. If people tell you that you’re the type of person to hang around an empty dive bar off of some highway in Nebraska or a beer-bellied good ol’ trucker boy with miles to go till your final stop: “Say it in Private” is for you.

Five words: Ryan Gosling with Jheri curls. How can you not pick this album up with a greasy-haired Ryan Gosling doppelganger glamming up the joint?

Because it’s a disco album.

Worse yet, it seems to be disco music written for musical production on stage. Here’s the story: Ryan goes to Hollywood, finds forbidden love, has to keep it in the shadows, something bad happens, and then everybody dances. The end.

To be honest, I’m not as thrilled with the contents of the album as I am with a replica Ryan Gosling with Jheri curls.

If I had to pick three songs that I did sort of enjoy, it’d be the title song “The Tea Dance.” And that’s it. But my choice is a good one. It’s the kind of song that you’d love to see played live because you know this is a song the band loves to play. The song as a whole sounds like something The Polyphonic Spree would have on their set list. If you don’t know who The Polyphonic Spree is, they are kind of like a white-robed cult with tambourines, but they are nothing short of amazing. Anyways, “The Tea Dance” seems to have everything, instrumentally speaking: a piano, a few guitars, an organ, a saxophone, a nice bass line, a choir section, wind chimes, and singer whose voice sounds like a raw cross between The Stroke’s Julian Casablancas and Led Zeppelin’s Robert Plant.

To put it simply, this album would actually look better framed on a wall rather than spinning on your record player.

There are no words.

No, seriously, there are no words to “Airport Love Theme” because it’s an instrumental album, and a pretty weird one at that. Every song on the album is a cover song of a theme song from a movie. And after a listen all the way through, I can determine that the man only owns one guitar pedal. How do I know? Because it’s used for every song. It’s hard to distinguish each song from the next. Everything is like, “Pwah, pwah, pwah.”

What takes the cake is the liner notes on the back cover. It starts off like this:

“After years of helping make hit records for scores of artists, Vincent Bell has gone out and made one all his own.

Mind blown. If I needed more persuasion to spend a dollar on an Album about airport love, here it is. I’m surprised the album didn’t melt my hands. It goes on to praise Bell by calling him “a creative genius, the most sought after, completely original, hit-makingest musicians on the scene today.” Here’s the weird thing: if he’s “completely original,” then why does this hot-as-shit album consist of nothing but cover songs (with “Airport Love Theme” as the exception)? I thought if you’re considered completely original, you’re supposed to write your own songs. But what do I know? Maybe he plays the guitar with his elbows.

“Somebody in the music trade recently surveyed the 50 best-selling records… and found that Vincent Bell’s guitar and creative artistry had contributed to 32 of them.”

There are seriously no words. Why include this poorly attributed fact?

The liner notes end with this:

“But, most of all, it’s all here in the brilliance of Vincent Bell. Because he got it all together.”