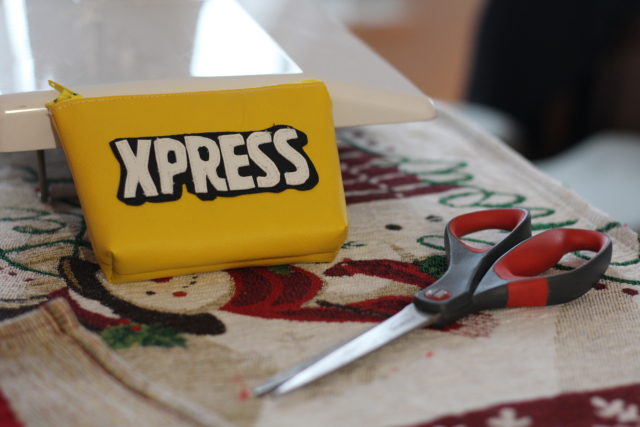 To some, sewing may be something that you picked up as a child. For many others, it can become a tricky task to pick up. That’s where this gal comes in.

The first thing you notice about 24-year-old Amy Castañeda is her vibrant locks of hair; A deep plum shade of purple fades into a hot pink hue, making this Youtube ‘Do it Yourself’ star pop while on camera. Standing out is key when making weekly Youtube videos about creating such things as handbags, skirts, jackets, wallets and more!

“I’ve always liked making things when I was younger,” she says.

“I started to sew when I was thirteen and then when I went to high school, that’s when I started getting into making clothes and other things.”

Some of her more recent pieces that have gotten a lot of attention are her original design vinyl bags. Experimenting with structures and colors, Castañeda has made bags in the shape of a watermelon, a vinyl record, and multiple logos, such as the famous Instagram camera. At one point, someone complimented one of her bags, asking if it was a Kate Spade piece.

“There are a lot of vinyl bags out there, and I decided that I wanted to make my own. The cool thing about bags is that when I’m done making them they look like you bought them from the store!”

If you’re looking to make a new handbag made out of vinyl, or a watermelon printed skirt, then Amy’s account has it. Her main focus is to get people to sew more, explaining that a lot of accounts on YouTube dealing with learning how to sew are usually aimed to an older crowd. Since she is young, she likes to make her ideas fresh and new to attract younger audiences. She loves to make her videos fun and enjoyable by making it easy and rewarding for anyone to do. She goes into complete detail when it comes to making a piece, from the measurements you should have, to the materials you should be working with to complete the piece.

“I usually get comments that are like, ‘your videos are the only ones that are fun.’ I guess that’s what makes [my page] unique because it’s coming from me, a new generation.”

Currently at more than 100k subscribers on YouTube, this savvy artist has already built a following for herself. So how does she obtain all of her followers? According to her, it’s because of the different variety of videos that she puts out there.

One of those followers is 24-year-old social media influencer and YouTuber herself, Andrea Reyes, whose channel usually consists of beauty and lifestyle videos, daily vlogs, challenges, and reaction videos.

“Honestly, she’s great at what she does, and yes, she’s a DIY YouTuber, but she’s so creative and one of a kind.” Reyes says, “DIY’s are all over YouTube, but something about her makes her super unique and there are not many people on YouTube like her, so she definitely stands out!”

Reyes says a good tip for people who want to start making YouTube videos is to, “…never start it for the money, you have to really want it and love creating content. It’s honestly my favorite thing to do – I don’t have many subscribers but the numbers don’t matter to me as long as I’m happy uploading content I love and it’s a passion and if I can help one person on this journey it will be worth it,” she says.

Amy’s journey on YouTube began in the 2012. When she first started she got a shout-out by a YouTube channel called Thread Finger, who noticed her for sewing videos. After that shout-out, she started to become more known which boosted her followers. They are now one of the channels she looks up to.

One thing she says is that most YouTubers have trouble with when starting online is coming up with consecutive ideas to put out for your viewers. In order to keep herself from not making the same videos, she usually gets her ideas from what she’s interested in at that moment.

“For example, I’ll be watching a movie or see a new character from a show and I’ll become inspired to make a piece dedicated to them,” Castañeda says.

Through her quirky and animated choices in designs, at the end of the day she enjoys seeing how her fans recreate things through her tutorials. All the love she gets from her fans and the recreations they make mean alot to her. At the end of the day, her fans are what ultimately pushes her to keep uploading more video content each week.

Another one of her fans is 19-year-old Maegan Bishop, graphic design student at the California Institute of the Arts in Los Angeles who also freelance models. Not only did Castañeda inspire Bishop to become a better designer, but it also inspired her to design a pair of shoes that she’s been wanting to make.

“I’m a type of person that totally takes in positive energy from people and when I started watching her videos I could see how happy she was making them and it’s just so beautiful,” Bishop says. “I love it when people are so passionate about their work, it just pushes me to become a better person and put all my energy into what I love to do and become a better designer.”

Amy graduated from San Francisco State University in the spring of 2017 as an Apparel Design & Merchandising major. While taking classes at SFSU, she was featured in the annual fashion show held by the department, where she showcased modern pieces derived from Mexican culture. Her inspiration for these pieces came from the 50’s and wanted to make them wearable for today through Mexican detailing such as floral embroidery.

The Apparel Design & Merchandising department at SFSU offers students a variety of courses from fashion illustration to product development for apparel. Connie Ulasewicz, department chair of the Apparel Design & Merchandising program at SFSU, says the program offers students the idea of designing things in order to solve a problem.

“If the problem is that there’s an industry that creates a lot of ways, how do I design garments with that in mind?” she says. “I make sure that I use all the fabric I have, or I design something from a product that already was. Whatever it might be, remember your understanding that design and garments help people function in the world, that’s their purpose, people learn that along the way here.”

With platforms such as Instagram and YouTube, you’re bound to find someone designing their own clothes and selling them. So, how hard is it really to get your clothes on the window of Saks Fifth Avenue or displayed in Milan? Ulasewicz says that in order for someone who wants to start their own clothing line, you should “learn on somebody else’s dime.” In other words, work for someone else first.

“It’s a very difficult business to get started in,” she says. “You can be working with someone else and at the same time be absorbing the way they make decisions or whatever their mission is and how they’re getting it out to people. The people who do that, I think become more successful because it’s challenging to find what your message, image, vision is in a manner that you can afford to do so.”

Amy has done just that. She currently works for a company in San Francisco called Jolie Coquette which offers minimalist inspiriting clothing. Here, Amy helps with making the clothes and designs as well. In the future, Castañeda wants to continue to make her own designs and one day put out her own label. Most of the clothes she plans on designing will be inspired from the 50’ and 60’s. For this, she gets most of her pieces from thrift shops, where she turns unwanted clothes into something new. For now, she will continue to make DIY videos in hopes to inspire people to get out there and sew.

If you’re en route to designing clothes and making a brand out of yourself, it is not impossible. For example, Judith Rothman-Pierce, 28, owner of the clothing line Rusty Cuts started an Etsy account in 2009 making dresses from vintage fabric and bedsheets. With over 17k. followers on Instagram, Pierce encourages people to start their own fashion designs.

“Do it, practice makes perfect-ish,” she says. “Give stuff to your friends and just see what works and what doesn’t. I think of my clothes more as a craft and not as much a fashion line, so it could be different for everyone.”

Her own clothing line, something Castañeda hopes to achieve in the future, is a dream she plans on making a reality.

Although the fashion industry is a cut-throat world, this fashionista doesn’t plan on giving up on her dreams anytime soon.

“When it comes to sewing, just go for it,” Castañeda says. “Don’t look at something and believe you can’t make it, you’d be surprised as to what you could make, we’re all capable of so much more!”