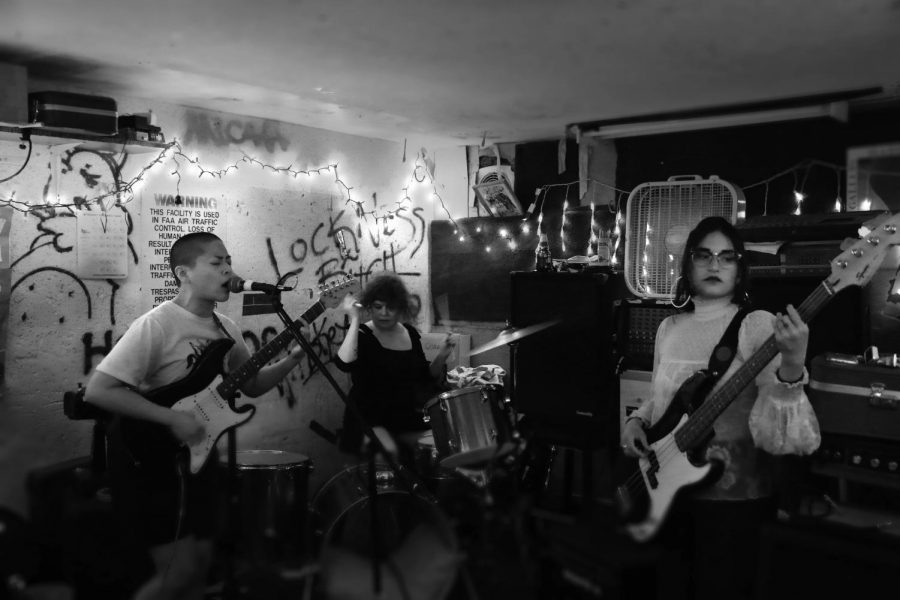 A metronomic drum click, guitar feedback, lingering bass chords, screeching guitar riffs and howling vocals are faintly heard outside the closed door of room 304. In the heart of downtown San Francisco, off Turk Street and up a flight of stairs, lies a place where ear plugs are recommended, but not required. A string of Christmas lights hang — even off-holiday season — and illuminate the dim space where Dreamy Radical Anxious Magical Angels, also known as D.R.A.M.A., practice most Mondays.

The post Riot Grrrl — a ’90s feminist punk movement — band is more than just a punk group, but also roommates and lovers. Singer/guitarist Monica Ramos and drummer Aimee Belden have been together since before the band formed in April 2017 and Belden lives with bassist Krista Delosreyes. Ramos met Belden through her former band Quaaludes, where she was the singer. Belden and Ramos wanted to form a new band so they invited Delosreyes — with no musical background ­ — who learned bass just for the occasion.

Human rights violations, racism, transphobia, fatphobia, racism and climate change are all the most pressing issues for the band. Through bringing awareness at shows, organizing and booking shows with a bill of people of color and giving monetary support to black and brown punk bands is how the band intertwines punk and politics.

Their musical positions are not set in stone. They rotate instruments to fit the tracks. Ramos will sit in on drums; Delosreyes will play Ramos’ guitar or sing while on bass and Belden will play bass and sing.

The first song they rehearsed, “Parking Meter,” was the first song they ever recorded. It was the song that was the most solid, Delosreyes said, which they submitted when Oakland-based activist and former singer of punk band Butanna, Vanessa Tsimoyianis-Butterworth, asked the band to be on the compilation “Evaluate What You Tolerate.” Released in the first year of Donald Trump’s presidency, the two-volume compilation consists of 50 Bay Area punk bands against racism, white supremacy and hate.

“It was a good start for us to be involved in something that had a little bit more substance and purpose. That activated our roles and what we wanted to contribute and convey ourselves by being a part of [Evaluate What You Tolerate],” Delosreyes said.

D.R.A.M.A. is a staple of the punk community in the Bay. “From being in multiple bands to showing up when it’s needed most, each member of D.R.A.M.A brings and represents their own way in which they resist systems of oppression that keep our friends and family down while showing the beauty and strength of our togetherness,” Tsimoyianis-Butterworth said.

Delosreyes and Ramos are both children of Filipino immigrants, which factors into D.R.A.M.A.’s sound. Ramos describes the band as a “Pinay” — a colloquial word for “Filipina” — punk band. On their debut album, they have a track titled “PINAY69.”

For Delosreyes, the punk genre serves as an outlet to voice concerns and creativity through music. For Belden, it’s important to stay raw, grounded and away from the corporate world.

“You are immediately reaching a lot of people who already have a counter-culture mind, who want to do the right thing, who want to speak out. It’s important to be apart of a scene that has like minded qualities that we are all mad about,” Ramos said.

Since Delosreyes learned bass and Belden learned drums for the band, they find themselves rooted in the do-it-yourself ethics of punk. Belden laughed as Delosreyes tried to fathom the idea of a corporate festival asking them to play.

The Universe is Lit: Bay Area Black and Brown Punk Festival is one of the community benefits that the band has played. Belden said a way they try to give back to the community is by being conscious of what line-ups they play in. D.R.A.M.A. also played the Matinee Benefit show for Mok and Pating — punk rockers who were murdered by police in the Philippines. Proceeds from the show went to the families of Mok and Pating.

The band’s next shows are Oct. 17 at the Knockout and the Pinoy Punk Benefit for Mississippi Immigrants Rights Alliance at Music City SF. All 10 new songs for their upcoming LP are planned to be released next spring off the Oakland-based record label Nervous Intent.

“We use the personal as political,” said Belden. “Not many of our songs are political per se, but our presence is or can be perceived as political.”