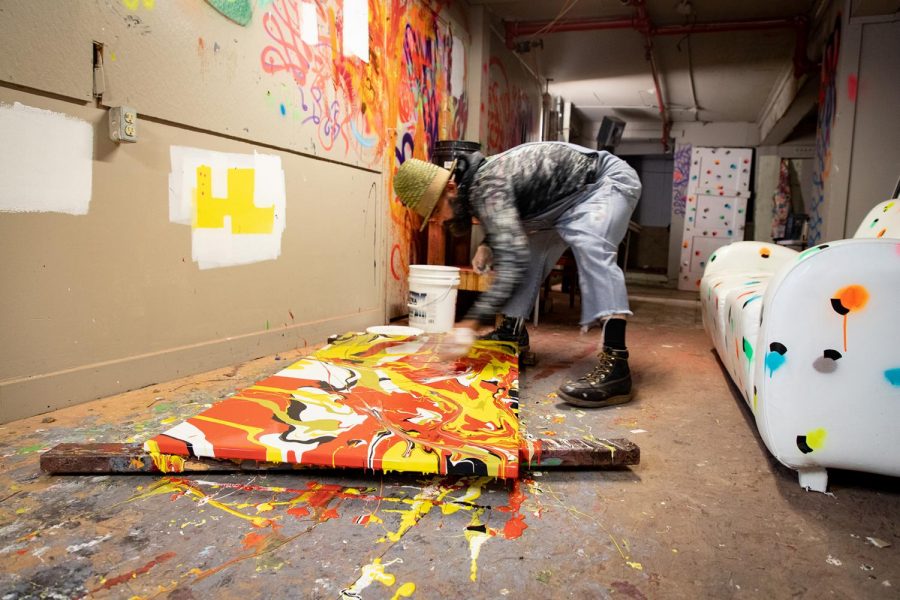 Pictured is Brett Vanhorn reaching across the canvas to pick up a side to allow the paint to drip in the direction he wants. Photographed on February 18, 2020 in San Francisco, Calif. (Maddison October / Xpress Magazine)

Story by Ryce Stoughtenborough and Photos by Maddison October
February 24, 2020

Brett Vanhorn was sitting in his Honda Fit Sport on the corner of Castro and 18th Street. He was shoveling globs of peanut butter into his mouth with the help of the handle of a plastic fork. Vanhorn is an artist, and it is not hard to tell from his car. Lilac, yellow and electric green paint smudges adorn his side mirrors. Dozens of sun-bleached photos covered in spray painted polka dots sit like tiles plastered across his front and back doors. There isn’t a piece of metal or plastic on his car that hasn’t seen a paint brush or spray can — including the green and blue spotted mannequin leg that sits atop his roof.

Vanhorn, 44, is an enigma whose car and art can be easily recognized throughout the Castro District. What sets Vanhorn apart from most artists is that he has been homeless for the last four months. A paint foreman for 15 years, he has been selling his art on the streets for the last seven years. Vanhorn was diagnosed with bipolar I, borderline personality disorder, post-traumatic stress disorder, anti-social traits, narcissistic traits and psychotic behavior which led him to leave his job.

Vanhorn is tall, with a slight hunch in his shoulders and is a self-proclaimed “Art Viking or Cosmic Caveman,” according to his Instagram bio.

He began explaining how he’s able to create eccentric art pieces, like his car. After repeating the beginning of his statement twice, he paused and sighed in frustration.

“So, these are just my beliefs and lets just say real quick here that what I believe is only make believe,” Vanhorn said.

Vanhorn said the symptoms of his mental health gradually built over the years, until they became virtually unmanageable.

When he met with a psychiatrist July of last year, he was “5150’d” — which refers to California law code for involuntary psychiatric admission. He stayed at San Francisco General Hospital for 26 hours. His eyes began to gloss over as he stared straight ahead, avoiding eye contact. He went on to explain how he did everything he could, yet he still felt powerless.

“I think when I say I had to lose my mind I think I totally like, went to a really dark place that I can’t really describe. … It’s a place that I’ve never been to before emotionally. Having manic episodes and going into psychosis, and wanting to die because I didn’t know what was wrong with me,” Vanhorn said.

According to Jacqui Ray, an old friend of Vanhorn’s and fellow San Francisco artist, their relationship deteriorated because of the type of person he was during this time, but not because of his mental health. She went on to describe how after they drifted apart, she witnessed his life spiral.

He struggles to survive since the money he makes off of his work goes toward food and art supplies. He hasn’t been able to pay child support or rent for his art studio where he’s been living for 15 months. His voice perked up when he spoke about the progress he’s made working with doctors and trying Seroquel — an antipsychotic used to treat bipolar disorder and schizophrenia — even though it didn’t work for him. He’s since applied for full disability benefits and said he’s working with a lawyer to resolve his homelessness.

“Listen, this is how I live. Terribly, raw.” Vanhorn said, while pushing aside trash on his passenger floor.

Among the pile of plastic coffee cups and water bottles lay one of his paintings of a DJ in the Castro. It’s the diameter of a round coffee table, with a fluorescent blue, yellow and orange stripe meandering a peach background. He placed it on the sidewalk under a color-changing street lamp causing the painting to shift shades. Channeling the boldness of the 60s pop art era, every painting of his contains brilliant colors.

The inspiration behind his art comes from his ability to constantly use his imagination, no matter how old he gets. He said that as he’s aged. He realized this because he was allowed to play a lot throughout his life and use his imagination. It helped him channel his emotions into his art. Vanhorn has since passed his knowledge on to other homeless artists like 25-year-old Raven “Skeeter” Surrell.

“I’ve been selling art on the streets for about seven or eight years,” Surrell said, rearranging his plywood masterpieces underneath the Castro Street lights. “I use chains and burn them on wood using a hand torch.”

Captivated by Surrell’s work, Vanhorn sometimes uses old techniques from his time as a paint foreman — like covering each piece in two-part epoxy resin, a coating that gives a glossy finish — on the street artist’s creations.

“It’s scary because people start to want more flashy, blue shit pumping into their fucking brain through their phone instead of like, all natural, all tasty ingredients into your eyeballs, do you know what I mean?” Vanhorn said, about society’s consumption of art through phone screens instead of seeing it in person.

Vanhorn’s artistic vision for the future involves creating more interactive art like his car. He loves the engagement his colorfully, chaotic car has with the public and plans to paint more cars going forward.

“The car is just a want to like, throw it all together and not care about it, and just have fun,” Vanhorn said, before getting distracted by a man in a purple, glitter jumpsuit and long, black wig. “Cher, where are you performing tonight? Cher, come back here! Write this down. Put this in the interview. This all needs to go in the interview. It’s very bohemia.”