No Better Time to Clear Your Backlog

Video games to finish while in lockdown. 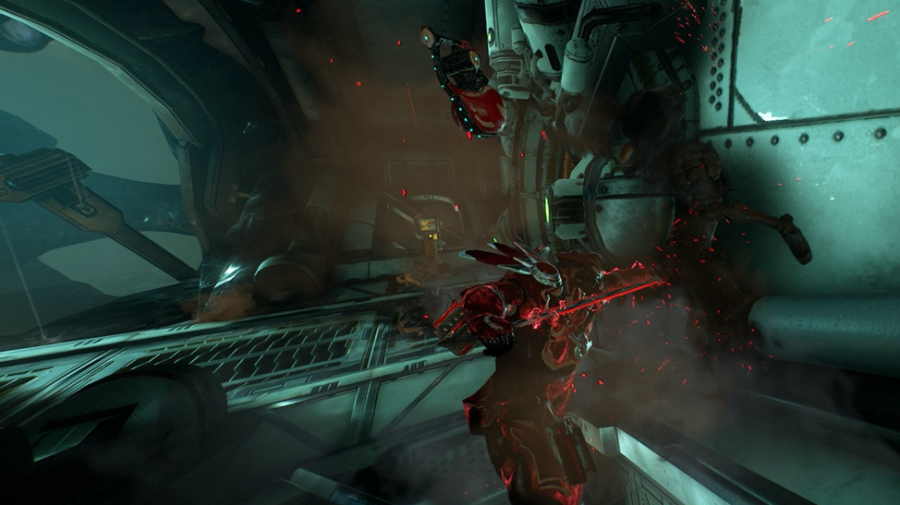 A Rhino frame getting ready to stab a Grineer lancer. Screenshot by Wilson Gomez.

A quick look at the Steam global gameplay statistics web page reveals that only 68% of people who own “The Witcher 3” have completed the first story quest and only 26% have actually completed the entire game. That means that not only have 32% of the people who own the game not even played it for more than five minutes, only about a quarter of owners saw the whole thing through. With the self quarantine order extended until the end of April, now seems like a good time to catch-up on all the games you’ve missed out on due to school and work.

The “Resident Evil 2” remake takes the original setting and story and gives it a fresh coat of paint. Gone are the pre-rendered backgrounds and tank controls, replaced with a fully

rendered world — that looks as good as it does terrifying — and a control scheme similar to that of “Resident Evil 4.” Taking place shortly after the events of the first game, this game follows Leon Kennedy, a rookie police officer, and Claire Redfield, sister of Chris Redfield, one of the protagonists from the first game, as they try to escape zombie infested Racoon City. In addition to the survival horror mechanics, the game also retains the puzzles from the original, though the solutions in the remake might not be what you remember. Throughout the game, you will be ambushed by “Mr. X” a tall, wide-shouldered man wearing a fedora and a trenchcoat, who is nearly impossible to kill. Most zombie media have trained us to believe that the best way to kill a zombie is by shooting it in the head. That doesn’t really work here. While you might get lucky and score a critical hit, killing the zombie with a few headshots, conserving ammo is the smart play here. Ever since Capcom decided to return “Resident Evil” to its survival horror roots, they have been trying to make zombies that are as tough to kill as they are scary. Unloading all of your ammo into a zombie isn’t going to help you much when there’s two more right around the corner. The key to staying alive is resource management, save your bullets for when you really need them, aim for the leg and run away. There’s too many zombies and not enough ammo. If this is your first time playing “Resident Evil” or you aren’t good at survival horror games, I would recommend playing it on normal. It’s challenging enough to keep the tension but not so hard as to be impossible to beat. “Resident Evil 2” is out on Steam, PS4 and Xbox One.

Taking place 20 years after cordyceps fungi begin infecting humans, turning them into rabid, mutated, zombie-like creatures, “The Last of Us” tells the story of Joel and Ellie as they travel through a post-apocalyptic United States in an attempt to find a cure for the infection. Made by developer Naughty Dog, “The Last of Us” continues the narrative heavy focus of their previous series, “Uncharted.” While there is gameplay, the star of the game is the storyline, particularly the relationship between Joel and Ellie, who he comes to see as a surrogate daughter. Broken up between seasons, each part of the story takes place in a different location starting in Boston during the summer before ending up in Salt Lake City the following spring. During their travels, Joel and Ellie open up to each other and we learn how damaged each character is and the evolution of Joel’s relationship with Ellie going from hired bodyguard and to a more paternal one. The game plays like a third person action game with stealth sections sprinkled in throughout. Resources are rare, so ammunition should be used sparingly, doubly so on harder difficulties. The crafting system is basic but quick, meaning that if you need to craft something, you can bring up the menu with the press of a button and craft it almost instantly. The combat AI is fairly intelligent, rushing you when your gun clicks because you’ve run out of bullets, or trying to flank you if you refuse to leave cover, though outside of combat, enemies can be easily distracted by throwing bottles or bricks whereupon they’ll mindlessly walk toward the area where you threw something. If you haven’t yet, now is a good time to play “The Last of Us” as part two is out in May, and HBO announced a few weeks ago that the game will be adapted as a series by Neil Druckmann, the writer of the game, as well as Craig Mazin, who wrote the “Chernobyl” miniseries for HBO last year. This game needs to be played on the harder difficulties. No sonar to help you know the location of all your enemies, and challenging enough that the tone of the world is not ruined as it is on the easier difficulties. The original game was released on the Playstation 3 and a remastered version that comes with the prequel DLC (downloadable content) already included is out on the Playstation 4.

For gamers on a budget, “Warframe” is a free-to-play third-person action game where you play as a robotic ninja in a far-flung dystopian future where mankind really messed things up and now the universe is divided between warring factions. The game recently celebrated its seventh year anniversary and shows no signs of slowing down, receiving regular updates and expanded content for free. As of this moment, there are 42 different “frames” each with their own abilities, strengths and weaknesses and over 800 weapons. All of which can be upgraded and customized using Mods, allowing each player to customize their frame to their playstyle. All those options might seem a bit daunting but the community is rather welcoming so anyone looking for help or tutorials can easily find them on YouTube or on the official forums, since unfortunately, the game itself does a bad job of teaching you the mechanics. What differentiates “Warframe” from other third-person shooters is the sense of movement. Sliding, wall running, and jumping make traversal easy, fun and fast, while utilizing a slowdown effect whenever you need to aim your weapon while performing gravity-defying acrobatics. While most free-to-play games nickel-and-dime you for characters and weapons, everything in “Warframe” with the exception of skins can be crafted in-game without spending a single cent. There’s so much variety once you get past the first few missions that there’s something for everyone’s skill level. There are no difficulty options, per se, though some missions will include an optional, challenging variant of that level. Missions can be played either solo or co-op with up to four people. There is a clan system for larger groups which allows for the crafting of more powerful weapons. The game is available on Steam, PS4, Xbox One and Switch.

Perhaps you’re one of those mentioned at the top of the article that haven’t finished the game yet, or perhaps, you still haven’t had a chance to start playing it yet. Now is the perfect time to jump in. The third game in the book-turn-video-game series, “The Witcher 3: Wild Hunt” follows Geralt as he searches for his protege/surrogate daughter Ciri who is being pursued by The Wild Hunt, a mysterious group who are intent on capturing her. The game is an open-world role playing game, allowing players to explore the world at their own leisure. There are approximately 60 quests related to the main story as well as an additional 400 side quests available for players to either complete or ignore. As with other big-name RPGs, “The Witcher 3” claims that the choices that players make have a visible impact on the world; fail to save someone and your failure will end up costing you in the long run. This is only partially true. Your choices do have an impact on the ending of the game but for the majority of the game, everyone will have a fairly similar experience. The combat is a huge step up from the previous two games, falling closer in line with other third person sword-swinging action games. The main game can be completed in about 50 hours, with an extra hundred or so hours needed to complete all the side quests and each of the two expansions add an additional 10 hours of gameplay. “Witcher 3” is available for PC (Steam/GOG), PS4, Xbox One and Switch.

Anyone looking to relive, or experience for the first time, the good old days of “retro” gaming, there are several series that have been repackaged for modern systems. The “Castlevania Anniversary Collection” includes the NES, SNES, Genesis and Gameboy “Castlevania” games as well as “Kid Dracula,” a formerly Japan only game, translated into English for the first time. If you’re feeling particularly masochistic, the “Contra Anniversary Collection” similarly includes the NES, SNES, Gameboy and Genesis side scrolling shoot ‘em up games as well as the European versions renamed “Probotector,” which replaced the characters with robots as a way to appease European censors at the time. Those of you wondering why older gamers don’t take you seriously, the “Megaman Legacy Collection 1/2,” “Megaman X Legacy Collection ½” and “Megaman Zero/ZX Legacy Collection” are also available. Both the “Megaman” and “X” collections are split into two parts, with each containing around four to six games. These side scrolling action platformers are among the hardest games you will ever play, particularly if you play the first few games of the “Megaman” collection. The “Zero” collection includes the six Gameboy Advance/DS games in a single collection. All of the collections are available on Steam, PS4, Switch and Xbox One.