Fluorescent lights fill the windowless grocery store with an artificial glow that, from the inside, makes the time of day indeterminable. Products are crammed in every niche, save for aisles, while shopping carts congest the narrow walkways. Health conscious shoppers analyze the products, reading labels on prepackaged goods that have been taking up space on the shelves for as long as their sell-by date allows.

The concept of the modern grocery has, for some, been both a blessing and a curse. No longer is it necessary to go to more than one store (the butcher, the baker, the pharmacy, etc.) to get shopping done, since it is all conveniently located in one place; yet, some argue that by monopolizing and corporatizing the food industry, the consumers are ultimately losing quality, which has prompted many to go straight to the source.

Living in the concrete labyrinth that is San Francisco, it can be hard to imagine that California is in fact the nation’s largest agricultural producer and exporter. In the city, tall buildings converge with one another, for blocks on end, but if you manage to escape the seven-by-seven grid, open land subsists. The state is home to 81,500 farms and ranches, totaling 4.5 million acres, and counting. From 2003 to 2009, the state’s exports increased 66 percent, proving that California grown products are in high demand.

While the most well known agricultural region in California is the Central Valley, a sweeping 400-mile-trench, most of the locally grown products sold in San Francisco hail from the coastal hillsides of the North and South Bay. Not only are these products fresher than those hauled in from out of the state or country, but as a consumer, you can be sure that your money is being put back into the community. 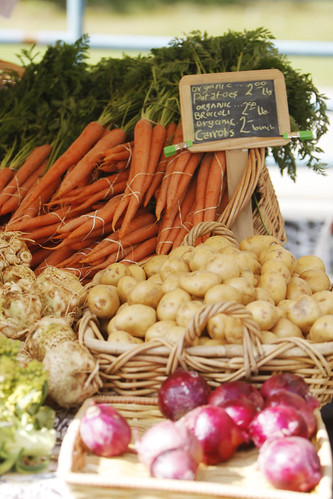 San Francisco has a long history of bringing rural farmers into the city to sell their goods, a trend still seen today. Founded in 1943, the Alemany Farmers’ Market, currently open every Saturday from dawn to dusk, became the very first of its kind in California. Since then, farmers’ markets have sprouted up in almost every neighborhood, with the same ethic: delivering local, farm fresh food at reasonable prices.

“Farmers’ markets are like an old school traditional way,” says SF Grill owner, Seni Felic. “It is especially important to remind people in the city how food is grown, how it is harvested.” Felic is energetic and friendly, taking the time to engage with every person who stops by his stand at the Divisadero Farmers’ Market.

The market, founded in 2008 and operated by the Pacific Coast Farmers’ Market Association, can be found brimming with local vendors every Sunday between 10 a.m. and 2 p.m., on the tent-lined corner of Grove at Divisadero Streets. Looking East, traffic zips along Divisadero in the foreground. Another block down, a staircase up to historic Alamo Square can be seen.

Each week, a different musical act provides a soundtrack for the market, offset by chatter and buzzing engines. Fresh flowers, produce, breads, and seafood are among the products offered, yet it is not long before you catch the aroma of burgers sizzling on a nearby grill. 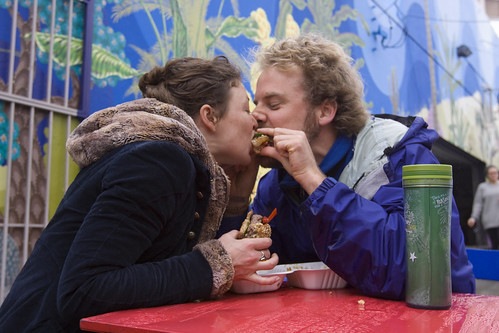 Founded in 2009, Felic’s mobile restaurant, SF Grill, serves up free-range turkey burgers and more from Sonoma County. The animals, which roam the farm freely, are fed a vegetarian diet. A towering man, with a creative sense of fashion, Felic believes in serving healthy, quality products to San Francisco residents, as though it were his duty. “Many people shop in grocery stores not knowing where the food comes from,” laments Felic.

Other vendors also share this sentiment. “It is really important to support your local community and eat healthy,” says Shannon Currier, vendor and kitchen aid for Donna’s Tamales, as she folds two plastic tables and packs up the company van, after a rainy day at the farmers’ market on SF State’s campus.

Based in Fairfax, family-owned Donna’s Tamales has been in business for over 18 years. Founded by Donna Eichhorn and Shirley Virgil, the company is focused on organic farming, sustainability, health, and community. “In the long run, it always pays off, even if it is more expensive,” says Currier.

Shopping at any of the city’s various farmers’ markets can be an enjoyable event, but working as a vendor is a unique experience unto itself. “When you go to a regular job you don’t get to meet other businesses and people who care about something,” Currier explains, her eyes flitter as she tries to grasp words that will convey her feelings. “We watch after each other, like a tribe.”

The fine crafted certified organic cheeses used in Donna’s Tamales products comes from Straus Family Creamery, a family-owned business, located along the cool, foggy shores of Tomales Bay, just north of San Francisco. The creamery prides itself on environmentally sound farming practices and has been in its Marshall, California location since William Straus started raising dairy cows in 1941.

Aside from the basic organic regulations, Straus Family Creamery goes above and beyond. Some of the practices in use include maintaining a closed herd, which bars outside animals from coming to the farm, a practice that aims to prevent the spreading of diseases, such as Mad Cow. In addition, all of the cows are vegetarian and the farmers work with animal nutritionists to ensure the cows have a balanced diet.

Though the tamales just recently made their debut at SF State, the market is in its fourth year of operation. In 2007, the school’s Associate Students, Inc. (ASI) started the campus farmers’ market, found sandwiched between the Humanities and Fine Arts buildings. Students sample products in between classes or sit on the curb along the front of the Humanities building to enjoy an alternative lunch.

The market, which runs during the school year, started with only three vendors and has since grown to nine. “We try to find vendors that are a good match for students,” Horace Montgomery, ASI’s programs and services director, says. “We ask them to lower prices for the students. The kids love it.”

The kids are not the only ones who are smitten. SF State’s farmers’ market model is trend setting. According to Montgomery, he has since been contacted by eight other California State Universities interested in following SF State’s example by starting markets at their campuses.

It is refreshing to see the community support such local markets, which place emphasis on a healthy diet, especially since the nation’s obesity epidemic is running rampant. Earlier this year, the Food and Drug Administration released guidelines, which encouraged Americans to cut refined grains, consume less sodium-rich processed foods, and eat more fruits and vegetables. The guidelines have persuaded some in the corporate food industry to reformulate their food packaging and cut sodium.

Luckily, there is no need for California’s farmers to refocus their harvests. As they continue to cultivate fresh foods, health conscious foodies everywhere rejoice. So, take advantage of the state’s natural bounties. When you next feel a hankering for healthy, sustainable, and delectable foods, cut out the middleman, get outside, and locate a market near you.