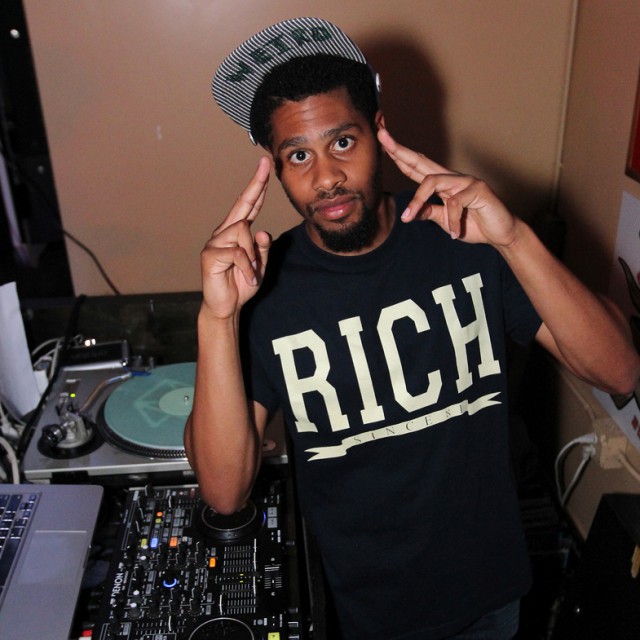 As soon as AWOL steps on stage he commands the attention of the crowd in the semi-packed strip mall bar, Park 77. It’s his first solo show, and the crowd watching him is an odd mix of his peers and sports enthusiasts still trying to figure out why the baseball game is now on mute.

He begins flowing as though the crowd, more than 50 people more interested in playing pool, is actually there to see him. Soon enough, eyes are no longer on one of the seven televisions broadcasting highlights from the Giants game. People place pool cues back into their carrying cases and watch as the MC in the t-shirt adorned with the word ‘Rich’ glides across the floor, rhyming effortlessly.

He complains about San Francisco’s Mexican cuisine falling short to his hometown of San Diego, ushering a laugh from the crowd, followed by a song dedicated to the Southern California city.

“If you’ve got some shit in your heart that’s real, share it with people,” he breathlessly tells his audience before going into his last song, the crowd nodding their heads to the music in unison.

AWOL took the stage nearly three hours after the show’s advertised 8:30 p.m. start time and laughs afterwards as he says, “I guess I’m not going to class tomorrow.”

San Francisco State student Alexander Powell spends his days toiling away in the Humanities department and his nights showing off his knack for the vernacular under the moniker AWOL.

From the time he was a teenager in San Diego, Powell knew he had a way with words.

“It started with lunchroom freestyles in high school. My friend would always beat-box. I was just kicking stuff off the top of the head, just having fun, and people would be like, ‘oh, he’s dope!’ And I just realized I actually have a little bit of talent,” says Powell.

What began as a way to kill time in the cafeteria developed into a serious passion for Powell during his freshman year at San Francisco State when his roommate encouraged him to abandon the playful nature of his rhymes and take his musical talent seriously.

Powell started rapping alongside his roommate’s band, From the Hip, at local shows. The rest is history.

A few years into performing with From the Hip, Powell partnered with his brother, Jordan,  and together they formed the duo SinSerious.

“I think SinSerious is definitely me at my best lyrically, sometimes. ‘Cause we’re going back and forth and it’s a little friendly competition––it’s expanding on what we can do.”

Last year when From the Hip––now Nova Noir––went on a break, and performing shows regularly with his brother, who still lives in San Diego, proved to be impossible, Powell found himself still searching for that musical release.

“I just decided I should keep doing music regardless.”

And thus, AWOL was born.

Powell’s brother was responsible for coming up with the name AWOL, a perfect fit for the older brother who had a penchant for going against the norm.

“He was just like, ‘Yo, you should call yourself AWOL. It fits you perfectly,” says Powell, “And I wasn’t average, I wasn’t going along with the scene all the time so it kind of fit.”

While the ease and grace present in Powell’s SinSerious verses is present in his solo work, the music is noticeably more personal.

At a time when hip-hop is overrun with artists rapping about girls, drugs, and cars, AWOL’s music is a nice refresher.