The State of Comedy in SF State’s Comedy 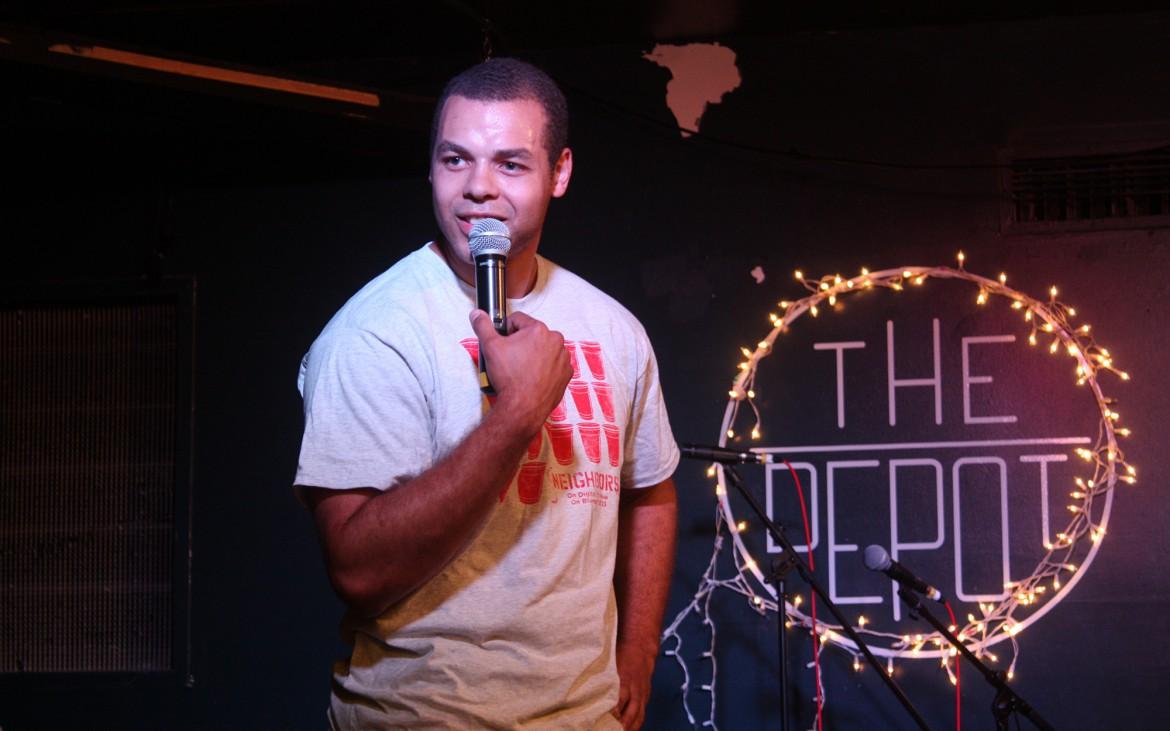 Photo taken by Michael Leri. Adrian McNair opens the show with his own act.

Before I roll up my sleeves and unload, first things first: going up on stage in front of people and doing anything takes giant testicles or massive ovaries. Public speaking is more feared than death meaning most people would rather be the corpse in the casket than the person delivering the eulogy at the same funeral.

That is important to note while reflecting on SF State’s comedy night on September 25th, a night where amateur comedians go on stage at The Depot and do some good ol’ fashioned stand-up comedy. It would be too easy and quite rude to dig into amateur comics for not being equals to Louis C.K. or Dave Chappelle. After all, every comic has to start somewhere and that somewhere usually is not that funny.

But it would be impossible to casually gloss over the shortcomings of some of the comedians. Comedy is made up of four pillars: delivery, timing, originality, and (most importantly) sting. Every line, every joke, and every set must at least utilize a few of those elements. The best jokes do all four.

Each comedian succeeded and failed in different respects. The opening act may have seemed like a loud, dry fart that only received blank stares and nervous coughs from the audience, but the jokes slightly improved as each comic took the stage. Despite the stumbles, most of them had at least one great joke that allowed them to cruise to the end of their set, which is sometimes enough. After all, this was a free show. However, it became harder and harder to enjoy the jokes – great or not – because of one simple aspect: the terrible heckling.

Heckling is a part of comedy; it just happens. But that reasoning does not excuse it.

Every single comedian had to go through the same thing: screaming, swearing, and interrupting from the drunk people in the audience at every possible moment. Bad jokes were met with shouting. Great jokes – given that they were not cut off and nearly ruined – were met with even more increasingly-incoherent shouting. It bred an increasingly hostile environment between the crowd and the comedians on the stage – and that is the saddest part.

Comedy, at its very core, is about having a good time. Satirical reflections on society or just really great punchlines yield escapism that stand-up comedy – at its best – does better than any other form of comedy. Laughing at hypothetical issues is a good way to forget about the very real problems that happen in your life. That’s why comedy exists; to escape our lives for a bit. It is equally as confusing as it is depressing when this goal is not shared by certain bad eggs in the audience. This mentality ruins the experience for everyone in the room and no one benefits from it.

It is a mentality that, frankly, I do not understand. It is almost as if the people in the audience cannot stand to see someone else getting attention. So, in a pathetic attempt to direct attention back to them, they do the only thing their tiny, lizard brains allow them to do: starting becoming a loud asshole. Being incredibly rude is commonly mistaken by idiots to be the shortest route to being funny. It is commonly why a lot of unfunny people you may know are probably overly sarcastic or derive their material at other people’s expense. There is a certain nuance to being rude and funny, something only the greats like Daniel Tosh understand.

Stupid people in the audience usually do not pick up on those subtleties.

The rude comments made by the hecklers were butting head-to-head with actual jokes, and, sadly, the loud bellows from the idiots were overshadowing actual jokes by the actual comedians. It became a dick waving competition filled with a bunch of chodes from the audience and the louder chodes usually “win.”

The chodes from audience even had a chance to snatch the mic during the open mic, which is where the real fangs whipped out. Tension was already high but exponentially increased as the awful hecklers took the stage and attempted to do some “comedy.”

Or I should say “The Thing Formally Known as Comedy” because a few of the hecklers that were drunk enough to stumble on the stage basically committed homicide against all things funny. Getting their intoxicated selves up there was almost a godsend because it cemented the fact that being funny is way harder than it looks, so, when in doubt, shut the fuck up.

After a “performance” that was basically just the word “faggot” shouted sixty-five times, it devolved into a mess that it did not ever completely recover from. Rap battle scenes in 8 Mile were not as hostile as some of the stand-up duels that took place upon that tiny stage within the college. The situations allowed from some solid insults, but, even then, it did not feel like it had the essence of comedy inside them – just mean-spirited burns.

I walked out of The Depot not only disappointed as a fan of comedy, but as a person. There were some good laughs, sure, but the sheer hostility of a small, loud section of the audience soured me on the whole experience and overwrote the good time that was buried within there. I love to laugh and absorb comedy. It is a shame that others cannot respect that.