In Their Shoes: Challenging Gender Norms Through Androgynous Apparel 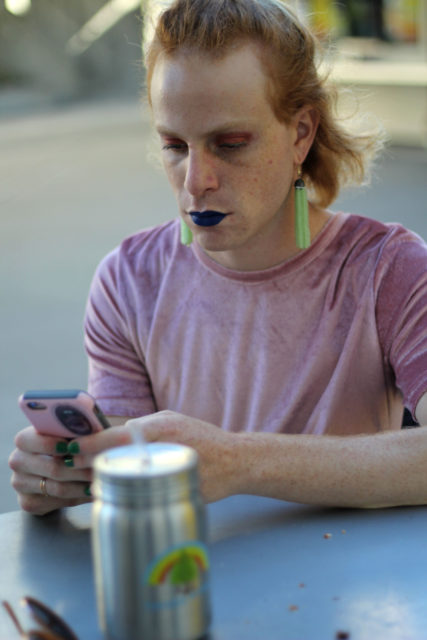 Once upon a time there was a world where any gender could walk into a clothing store and not have to worry what sex they were shopping for. As amazing as that may sound, for now it can only remain a dream that can one day hopefully become a reality. Don’t give up yet, there are still options!

When it comes to apparel now-a-days, I can say that I’ve seen it all. Women dressed in tailored suits, men in chiffon skirts, and kids in non-gender clothing. I grew up as a tomboy, so wearing my brothers big shirts and oversized pants were easy to obtain. This memory led me to question what it would’ve been like for me as a young boy trying to fit into my sisters clothes. The truth is, I probably wouldn’t of been able to fit any of it due to the way my body was built. Is this what goes through the minds of men who prefer to wear women’s clothes?

After interviewing some students from San Francisco State University, along with faculty and people from the San Francisco community, they said yes. The three main issues that were brought up the most when asked were the main audience being focused on women and femininity, the lack of sizes, and clothing stores sticking to the regular boy/girl sections. 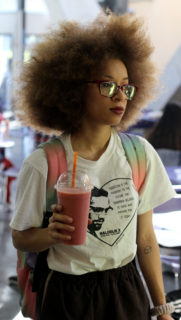 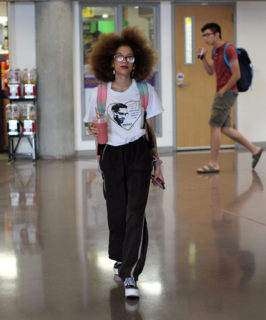 For people like Aaron Steinfeld, 25-year-old graduate student at Sf State, and LGBTQ youth advocate at the Family Violence Law Center, androgyny means an ambiguous gender identity or gender representation, which can deal with either someone’s internal sense of how they think of themselves and or how they present that to the world.

“I’m trans and I like presenting feminine in society to lure the rest of the world, and how putting on clothes everyday feels very important to me to display an accurate representation of myself to the world.”

In fashion, androgyny has been seen more and more on the catwalk by designers like Gucci, Kanye West (and many more), and most recently at New York Fashion Week, Maison the Faux. So it’s no surprise that non-gender clothing has been making itself a big debut. According to 44-year-old Health Education Professor at SF State, Ivy Chen, a lot has been driven by the acceptance of it through Millennials and the new Generation Z. 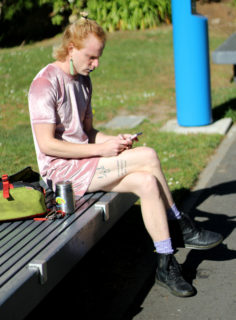 “Millennials and Generation Z are much more open and accepting of all different kinds of identities, and therefore those types of attitudes about discriminating and feeling like you only can be this and that, those attitudes will die out,” she says.

Students like 18-year-old Broadcast and Electronic Communication Arts major, Karla Orozco, feels that androgynous apparel is in fact favoring the female sex – that it is easier for women to find male clothing than for men to find female clothing.

“If it’s going to be something that’s for everyone then it should be for everyone you know? I think that’s definitely something that has to change in the industry,” Orozco says.  Another student like Rosa Gutierrez, 20-year-old Biology Major also agrees. “I do agree that it’s harder for men to find clothes which usually leaves them without a section to look into,” Gutierrez says.

The facts are that the “rules to fashion” have continued to change throughout the years and we’ve seen this through many advertisements, and also, on the fashion runway. But the real question here is has the industry limited itself to a certain audience?

“Millennials and Generation Z are much more open and accepting of all different kinds of identities, and therefore those types of attitudes about discriminating and feeling like you only can be this and that, those attitudes will die out.”

Of the bigger community, when seeing sizes range from only small to large, it shows that these clothing companies are limiting themselves and not serving the whole audience.

28-year-old graphic design professor at California College of the Arts, Juan Carlos, feels that fashion has always been portrayed for the skinny community. 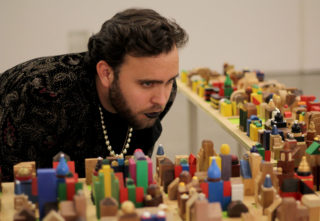 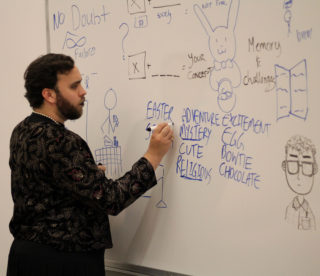 “A lot of the clothes that androgynous apparel companies make, and I’m happy it’s being made, fits mostly models that are super skinny, and when you’re bigger you have more restriction on what to wear, and it’s a lot harder to find clothes that fit,” Carlos says.

When shopping in the women’s section he is usually a size 10 or 12, and because of his size, he feels that thrift shopping offers a wider variety of things for everyone.

I find myself doing the same thing. As a hip-hop dancer, I’ve always enjoyed wearing slouchy clothes because of its comfort. I hate wearing tight clothes that don’t let me breathe, and because of my figure, I find myself making my own clothes. The same thing goes for Juan Carlos and many others.

Drag queen Jordan Isaac, also known as “Kiki Krazier,” finds himself making his own women-inspired clothes for his performances due to the lack of sizes being offered to him.

“Most of my clothes are made, but if I do have to buy something, it is a bit unflattering on me,” he explains.

“For example, I have to make a dress out of an oversized shirt because I can’t fit a store bought dress. They don’t have that for men, they do not sell dresses for men. Most companies who say they want to offer androgynous clothing mostly focus on women. The truth is, if you want something that is tailored to your body, you either make it yourself or get it made for you.”

Companies like Target have already jumped on the no-gender apparel bandwagon by switching up their Boy and Girl sections to just Kids. Is this what is going to pave the way for families to open up their mind on allowing their children to wear whatever clothes they feel comfortable with?

Chen explains that companies like Target are being very inclusive.

“For example, in the past you had a kid who would identify as a girl and you would only stay in this one section, and you’ve never even seen the boys section, that’s a whole half that you actually don’t browse and don’t have the opportunity to buy from.”

As a company, Chen feels that it is a smart financial move that will allow customers to see everything the company has to offer rather than just a single section.

Clothing companies like Kipper Clothiers in San Francisco have made a statement by offering women tailored suits to those who want it. Other companies like Sixty-Nine, based in Los Angeles, offer clothing that doesn’t fall under labels, simply clothes for anyone to wear. And there are many more following suit – the only thing is that although it is such a great movement, there are people that feel companies are still lacking on the aspects of gender, sizes, and clothing stores conforming to boy/girl sections.

The more we open up, have more visibility, and mainstream non-gender clothing, could possibly change what these companies are lacking to serve all sexes. An array of clothing items being displayed, ranging from multiple colors and sizes that anyone can pick up and take home, is a dream, for some, waiting to be seen in retail stores. The fashion industry has a lot to offer, and hopefully through time, it will be capable to offer this as well.

All photography by Jazmine Sanchez