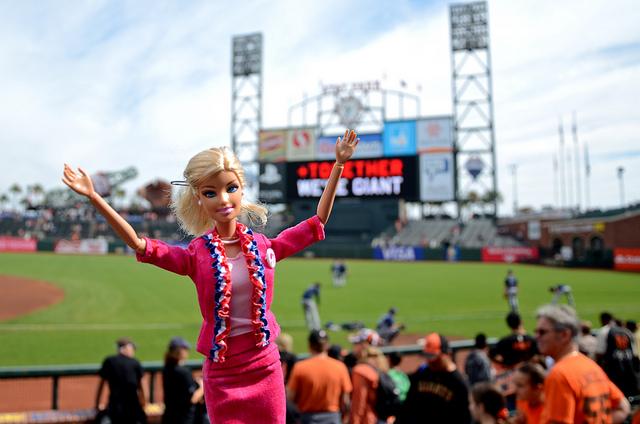 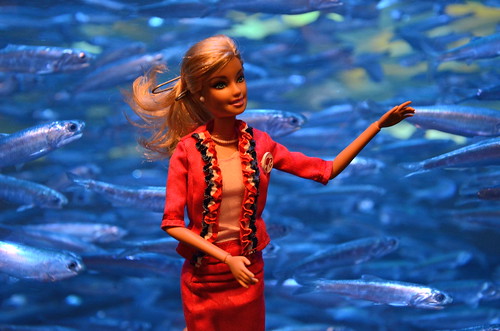 Barbie give a speech about saving the ocean, ‘one fish at a time.’ Photo by Virginia Tieman.

The message of hope is so last election-the newest presidential candidate is running on a campaign of dreams. Though the 2008 presidential race showed Americans that it wasn’t irregular for a woman to run for office, being a woman is not what makes this candidate stand out. She wouldn’t be the first president to be an actor. She would, however, be the first president to be a doctor, a pop star, and a mermaid. She’s served in four out of the five branches of the military and is pretty handy with a rapier as evidenced by her turn as a musketeer. She has mild religious affiliations if her Christmas caroling gown is any indication. Even though she’s unmarried, she’s in a committed relationship and can stand proudly on her own two feet. She’s also 11 inches tall and made entirely of consumer-grade plastic.

Don’t let her stature fool you: this little woman represents the dreams of girls who don’t want to pursue so-called “feminine” careers. On April 5th, 2012, Barbie’s press secretaries (or rather, Mattel representatives) announced her run for the White House. Though it is not the doll’s first “glam-paign” (she also ran in 2008), it will be the first time she has ever been able to stand erect and watch it for herself. Weighted pink platforms allow the doll, who has spent her 53 years being supported by doll stands, to finally support herself.

“I Can Be…President B Party Doll,” who comes in a variety of skin tones and ethnicities, is a definite departure from Barbie’s predecessors. No longer is she solely a white, flaxen-haired homemaker. Now she represents a multitude of races and professions like astronaut, yoga instructor, veterinarian and computer programmer.

“It’s never too late to ‘B’ a Dreamer–especially in our doll-ocracy!” writes Barbie on her Tumblr blog. “Remember, dolls, if you can dream it-you can be it.”

Barbie is not a democrat or a republican. Instead, she runs under her own banner of the “B Party.” The party platform reads: “B a dreamer, B inspired, B informed, B confident, B involved.”

Standing in equally stylish shoes is the not-so-plastic president of San Francisco State University Associated Students Incorporated. Adenike Hamilton, 21, balances her school schedule (she’s an Africana studies major) with all kinds of extracurricular activities: she formerly held the position of representative at large for ASI and was an internship coordinator for Project Connect. She cites both jobs as her inspiration to take on the job of president.

“I knew that in the future ASI needed leadership going into the future and some tough choices had to be made for the organization and that I had the skills to be able to provide that leadership and make those tough choices,” Hamilton says of accepting the role. Women in politics, like Margaret Thatcher and Ellen Johnson Sirleaf, have always inspired Hamilton. 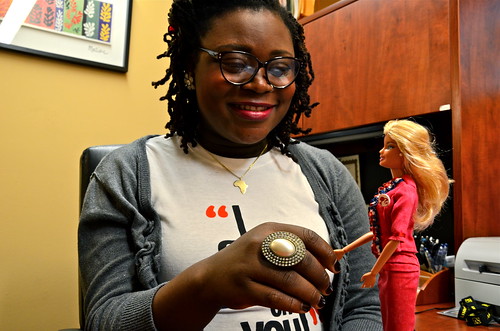 “These women had chosen to lead their respective countries in times of turmoil and two have proven that despite being criticized and called names, they were effective leaders,” she says. She argues that these women could do as much, if not more, than their male counterparts could. Hamilton admits that the road to the White House, while inspiring, will be rough for any woman. “She has to be influential enough to make the American people forget that she is a woman running for president; she has to be able to convince the American people that she is better than every other candidate.”

Aside from the issue of being an inanimate object, her gender would be the ultimate hurdle for Barbie to surpass if she was actually running. A 2008 study conducted by Northwestern University found that women are more likely to vote for men as president, or to view men as more politically competent than women. This finding was seemingly reflected when Hillary Clinton lost the democratic nomination for candidacy to less experienced Barack Obama that same year. Voters perceive the faces of male politicians as more competent and dominant relative to female politicians whereas female politicians are perceived as more attractive and approachable relative to male politicians, according to the study.

Attractiveness also seems to be a factor when voters decide who they want running their country. Francis Neely is an associate professor of political science at SF State. His office is simple with bookcases of scholarly texts, file cabinets, and a small desk. Pictures of a smiling girl, presumably his daughter, are among the few personal touches. Neely himself is casually dressed in a khaki shirt, jeans, and sensible leather loafers.

Barbie, and women in general, he says, would have a few obstacles in the way of their campaign. “There’s a common perception by women that they can’t win an election so why run?” Neely says. Women, according to Neely, tend to win in “open contests” that are not against incumbents. “Women in those kinds of elections are as competitive as men. They win about half the time.”

Neely does cite the Northwestern study and similar studies when it comes to how candidacy correlates with physical appearance. “Appearance does matter and we’re not sure how and why that works,” he says as he smiles. “It’s bizarre.” Neely also says that the attractiveness of a candidate could also backfire on them and that Barbie specifically could run up against the stereotype of being “an empty headed blonde.”

Neely suggests that news coverage of women politicians is especially skewed. A woman in politics, he says gets more press coverage on what dress she wore and what her hair looks like. “Did anyone write about Obama’s suits?” he asks before shaking his head. “It just doesn’t happen.”

And indeed, the wardrobe of the third party presidential candidate has been covered thoroughly in the press.

Barbie’s wardrobe this campaign is the creation of designer, Chris Benz whose designs can also be seen on First Lady Michelle Obama. Her outfit is fairly conservative considering the American public has seen the candidate in bedazzled evening gowns and pink bikinis. When designing Barbie’s campaign outfit, Benz added patriotic flair to her trademark pink by adding red, white, and blue ruffles to her pink suit jacket. He also chose not to dress her in a pantsuit, the traditional garb for many female politicians. 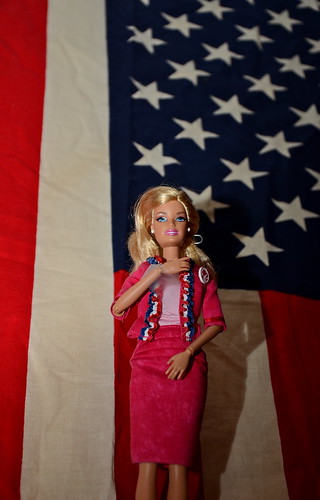 Barbie pledges her allegiance to the flag of the United States. Photo by Virginia Tieman.

“I think just in terms of not being overtly masculine, a skirt suit is that classic silhouette that I think is really, really polished and pretty,” Benz said in an interview, adding that he found pants to be “a different territory, a little sportier.”

Benz also says that color need not promote weakness or frivolity, a connotation usually associated with women in politics and their “pink issues.”

“Pink, for me, is an inspirational color. No matter what it is, whether it’s like a food or a car or something, it always is a little bit encouraging and uplifting.”

Campaign news is mostly circulated via the doll’s Tumblr account. The polls are tallied and questions asked. On the front page, some of the thousand plus followers have voted on what they think the most important qualities of a leader are. “Fair” ranks number one with “hard-working” as a close second. “Approachable” barely makes the list with the fewest amount of votes. This last statistic is strange considering the candidate’s large presence in many girls’ childhoods. Forget a candidate you have a beer with, Barbie is a candidate you’ve probably dressed and undressed a thousand times over!

Professor Neely says that the idea of “having a beer with the president” is less about masculinity and more about “whether people feel the president understands them and their lives.” Hamilton admits that Barbie was a big part of her own childhood.

“I think it’s important to send a message to young girls that they can be anything from a very early age and Presidential Barbie is a role model,” she said though she is quick to add that some of the representations of Barbie are good role models for young girls but others show oppressive and gender normative viewpoints to young girls.

So does Barbie have a shot against President Obama or former governor Romney?

“I think we can do this!” says Neely in regards to the likelihood of a woman becoming president in upcoming elections.

For her part, Barbie seems to take the backlash and the accolades all in pink-heeled stride. Her Tumblr page reflects this can do attitude with posts like, “Never let anyone dull your sparkle!” and, “There’s never a dream too big for a doll standing on her own.” The American people will have to wait until November to see how the race for the presidency shakes out, but through it all this candidate, like she has for 50 plus years, will be smiling. 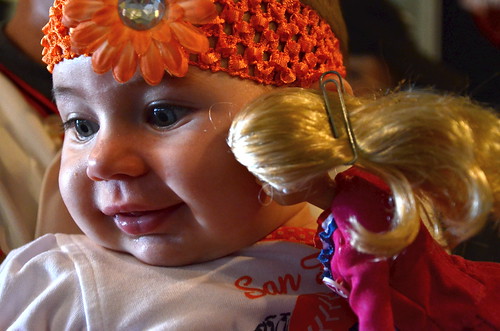 Barbie shows she cares about the people. Photo by Virginia Tieman.

One Response to “Red, White, and Pink: Barbie for President”