Miracle on 19th St: The Secret Life of a Mall Santa 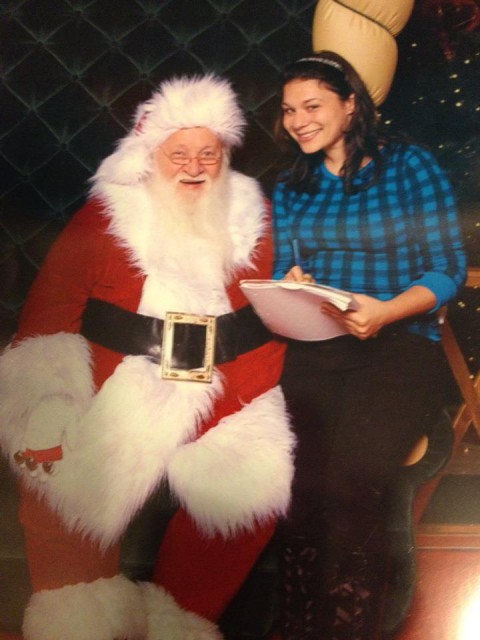 Santa Claus is not supposed to take interviews. The official “Guide to Santa MEDIA Questions and Answers” put out by GGP Corporate Communications stipulates in screaming capital letters: “DO NOT RESPOND IN ANY MANNER TO ANY QUESTIONS THAT ATTEMPT TO MAKE YOU OUT OF CHARACTER.”

Which is why, when first asked his name, Larry Dahm answers “Santa Claus.”

The media guide goes on to give examples of the company approved responses he, or any Santa is allowed to give. The proper response to “What did you do before you were Santa?” is a jolly “Before I was Santa? Well I don’t remember a time when I wasn’t Santa!”

Dahm, who is in his ninth season of being a mall santa says, “I’ve done a little bit of everything.”

He says some of his early jobs included picking strawberries, bucking hay, and participating in a junior rodeo. Later in life, Dahm worked in the lumber industry, at gas stations, grocery stores, and says he even owned his own cab business for ten plus years.

Dahm’s attitude towards his work these days has changed drastically.

“I had an attitude, like most sailors when they’re half intoxicated,” he says with his trademark twinkle in his eyes. “As I got older, I found my way with the lord,” he says “and that’s why I do what I do [now].”

General Growth Properties (GGP) is the corporation that works with malls to employ Dahm and other mall Santas.

Every Santa is interviewed by GGP and has to undergo a full drug test and background screening before they can get the job. Dahm says he passed his test with flying colors.

“They said I probably had a cleaner record than the President of the United States,” he says.

The GGP guide also has a mandated answer to having a background check. The “in character” answer is: “of course I’ve been background checked! I slip into millions of homes every year!”

“Not just anyone can be Santa,” says Larry Wells, the district mentor for the Stonestown Mall. “Theres an actual Santa school that they go to in June and July. As soon as Easter’s said and done, we have about a month break and then it starts all over again.”

At Santa school, potential performers have to roleplay in worst-case-scenario situations, like crying children, and also watch online tutorials and take written tests.

“They have to get a 90% on everything or they don’t get to be Santa,” says Wells.

When the season starts, Wells is in charge of mentoring Santas at over eight malls all around the Bay Area. Some problems he solves are little ones. When a child is crying on Santa’s lap, Wells immediately stops his conversation to help. He stands just off camera brandishing a feather on a stick. The prop is so simple it could be a feather duster, but with Well’s skillful wielding, the child is transfixed and even gives the camera a shy smile.

Other problems are, if you’ll excuse the pun, hairier. Last weekend, for example, he says he had to pick Dahm up and drive him to get his beard bleached because a mall official claimed it was “white, but not white enough.”

“We never use fake beards,” he says shrugging, a fact that adds to the realness of the company’s commitment to the idea of Santa. “We’re working for Santa and if he’s unhappy it shows. It’s a big production.”

As the boy moves closer, he absentmindedly starts to pull his shirt up and display his baby portliness to the seated Dahm.

“Oh no skin here, young man,” Dahm chuckles waggling a finger at the boy whose parents are scrambling to cover their precocious child. “I know it’s San Francisco but you can’t do that!”

Eventually, the boy sits on Dahm’s lap, looking in awe at his full, white beard. With some prompting from his parents the boy asks for “drums” with one hand in his open mouth, fiddling with a loose front tooth. Dahm nods knowingly and answers, “Lucky for you I have a lot of drums!”

To his left, at a counter bedecked with Christmas knick knacks stands Maygen Michota, his manager. She smiles as she watches the aftermath of the flashing, and bops her head slightly to the holiday music piped at ear splitting volume via the mall’s speakers.

The reactions of the kids is her favorite part of the job.

“It’s just pure and innocent,” Michota says. “It’s so sweet, even when they cry.”

Santa’s next interaction is with a crier; a tiny baby girl swathed in pink footy pajamas. She starts to fuss almost as soon as her parents lift her out to Dahm. He looks the baby in the eye and starts speaking softly to her. He waves a small set of handbells and they jingle softly in front of her face. She is transfixed either by the noise or by the kind words of the huge man in red. Either way, she sits quietly in Dahm’s arms and takes a precious, if a bit stoic, picture.

“That is the part I hate,” Dahmn says, referring to the crying. “It used to make me so upset when I started, I almost quit.” Dahm says he got over it by talking to veteran Santas who reminded him that it was just “another part of the job”.

“They really get into the part. Some santas have a hard time getting back to reality,” Dahm says.

There’s something special about this Santa in particular. I’m not the only person that feels it. A complete stranger walks up to me as I stand a few feet from the throne taking notes. She’s a middle aged woman, laden with shopping bags.

“That’s the real deal,” she says gesturing a long nailed finger at Dahm, “I always think he’s the real deal. He’s the one who does all the commercials.” I counter that I don’t think Dahm has ever done any television work. She ignores that and launches into a story about how she remembers waiting to sit with Santa as a child. She talks for a good ten minutes about her past, her present, and her future as it related to Santa and when she leaves she squeezes my shoulder and wishes me a Merry Christmas.

“It’s a corporate game, it’s money generated,” Wells confides. “But in the same breath it’s such a tradition.” He then launches into his own story of meeting Santa. He even admits to being a beard puller.

The official guide says that Santas must answer the question of yearly income with a glib “I get paid all the candy canes and snowballs I can eat, as well as plenty of carrots for the reindeer.”

Again, Dahm has his own approach. “Some of your Santas out there, all they’re after is the money,” Dahm says with, of course, a twinkle in his eye. “I want the money, but I still believe I’m doing a faithful thing.”

The cynic will point out the “faithful” thing Dahm is doing is placating children while their parents shop. They’ll point to corporate with their lists of appropriate answers and employees who run around protecting their precious image. The cynics will say that, Dahm, Wells, Michoto, and all Santas are just playing into the commerciality of the season, a season that was silly to begin with.

What these humbuggers fail to realize is the driving force behind all of this. It’s a feeling rather than a product.

“With all the troubles that’s going on in the world, it’s a time to stop and reflect. It’s about family, kids, relationships,” Wells says. “For a short period of time [Christmas] it gets your mind off other things, that’s what I’m using this job for. I just put my other issues aside and do this.”

With a job that is seven days a week, for two months Dahm has had to put parts of his life on hold. He has five grandchildren “that I know of,” he quips.

A few years back, Wells’ youngest grandchild was turning six and he was going to have to miss her birthday because of his shift at the mall. “She put me through a guilt trip,” Wells recalls. “But I told her, ‘I’ll be there on Christmas eve.” And he was.

“I have an ability,” Dahm says, waving to the people on the upper tier of the mall before turning to me and finishing. “I’m trying to bring pleasure to the children, to give them hope that things will be better.”

Yes S.F. State, there is a Santa Claus and though we are old and cranky and full of cheap beer, we can still feel it. It’s the sense of community in the season. It’s the faith that things will get better, beyond finals, beyond college, beyond everything that hurts us now. All that’s needed is the willingness to believe in a little magic.

And a super white beard!