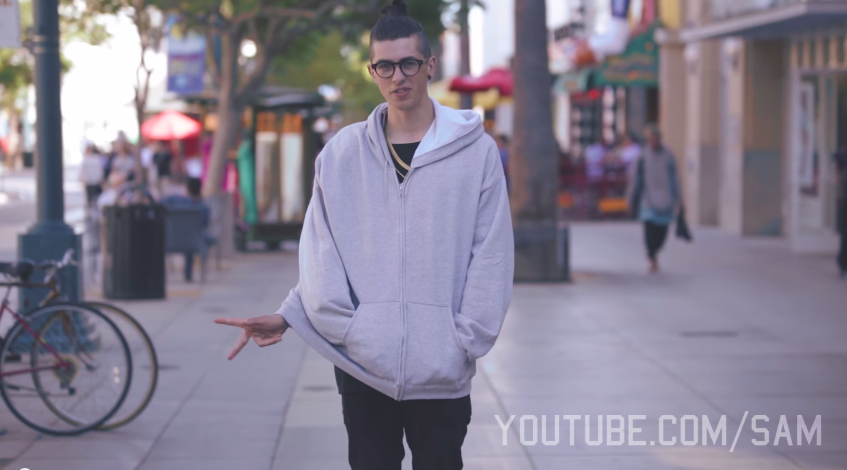 A screenshot of Sam Pepper before he begins his “pranking.”

Today, some of the most popular videos on the internet are prank videos; possibly because people seem to find it hilarious to watch people other than themselves get tricked. However, it is a genuine tragedy when these types of videos are used to violate anyone in a sexual matter.

On September 20, popular British YouTube prankster, Sam Pepper, uploaded a video, that has since been deleted, titled “Fake Hand Ass Pinch.” It showed Pepper asking random women for directions. While the women are distracted, Pepper would grab their bottoms and blame the groping on passers-by. Prior to the video getting deleted because of the many reports, it gained over one million views within two days.

Most of the girls in the video, understandably, reacted with discomfort and surprise. One girl, in particular, is seen backing away while saying, “I don’t like that.” After Pepper’s inappropriate actions, these girls shrugged it off; however, the amount of disgust and anger that appeared on the girls’ faces say that they did not recognize Pepper’s behavior as a joke.

Hours after being uploaded, Pepper’s video garnered a vast amount of negative attention, both from his viewers and the YouTube community. Laci Green, a YouTube star who is known for her videos on sexuality, wrote an open letter on her Tumblr page to Pepper calling out his inappropriate actions.

Green has also reached out to other YouTubers who have co-signed the letter. Among those YouTubers, Hank Green, Tyler Oakley, and Grace Helbig are a few listed as co-signers.

With over two million subscribers, he reaches out to mainly the young adult population, many of whom were highly offended. His viewers took to the Twitter-sphere to voice out their opinions. The hashtag #ReportSamPepper ended up being one of the trending topics on the social media site. While Pepper may have thought the video to be of absolute hilarity, other users thought the complete opposite. Some have tweeted that Pepper should be reported for sexual activity, while others simply state that the video is downright rude.

[See how Twitter is reacting to Sam Pepper Video via Storify]

According to The Rape, Abuse and Incest National Network, “one out of every six American women have been the victim of an attempted or completed rape in her lifetime.” This now includes the women that are seen within Pepper’s video.

I think the video is a great example of how sexual violation of women is used frequently, especially in a more casual sense. Even though sexual harassment is not a new topic, the usage of it in videos on YouTube is something that is becoming more common. This is not the first time that the YouTube community has dealt with sexual abuse.

This past March, YouTube musician, Tom Milsom, was alleged to be participating in a sexually abusive relationship with a minor. Milsom, 22, has since admitted his relationship and has been attacked by the public through Twitter.

In light of recent events, however, Pepper uploaded two more videos in response to the first “Fake Ass Hand Pinch” prank. The second video, which has since been deleted by Pepper, was of a woman going up to various men and grabbing their buttocks. As opposed to the women, the men involved reacted in a slightly different way. Instead of being a bit clueless, they instantly knew that the woman was the one who touched them. In addition, they were also more vocal for one man asked, “why did you do that?” Majority of the men also knew that it was the woman who groped them because she did the inappropriate action in a more obvious manner. The woman acted upon her actions when the men were alone, unlike Pepper who waited for the women to be in a large group so that he can blame his wrongdoing on another individual.

The third video titled, “The Reveal,” shows Pepper stating that “all videos were staged and scripted.” He further states that the people involved were well-aware about what was going to occur. Pepper’s three-part series was a part of a “social experiment” so that he can voice out an awareness to all his viewers that sexual harassment and abuse is something that should be addressed.

While these particular videos have gone viral, it is not the first time that Pepper has sexually violated women on-camera.

Over a year ago, Pepper created a video entitled “How to Make Out with Strangers.” Here, the YouTube star pressures young women, on camera, to kiss him. Again, some of the women in the video seem to feel uncomfortable. Each of their faces have a questioning look as well as a look of annoyance. One woman in particular was approached by Pepper despite the fact that her boyfriend was only a couple of feet away.

If Pepper thinks it is acceptable to film and upload these types of videos, he is clearly not in the right state of mind. Being famous on YouTube does not justify ignorant or abusive behavior. If Green’s letter and recent video, “Sam Pepper Exposed,” is not enough to put an end to these casual occurrences of sexual harassment, what else can we do? Until then, Pepper’s videos will still grab more attention, just as he wanted.