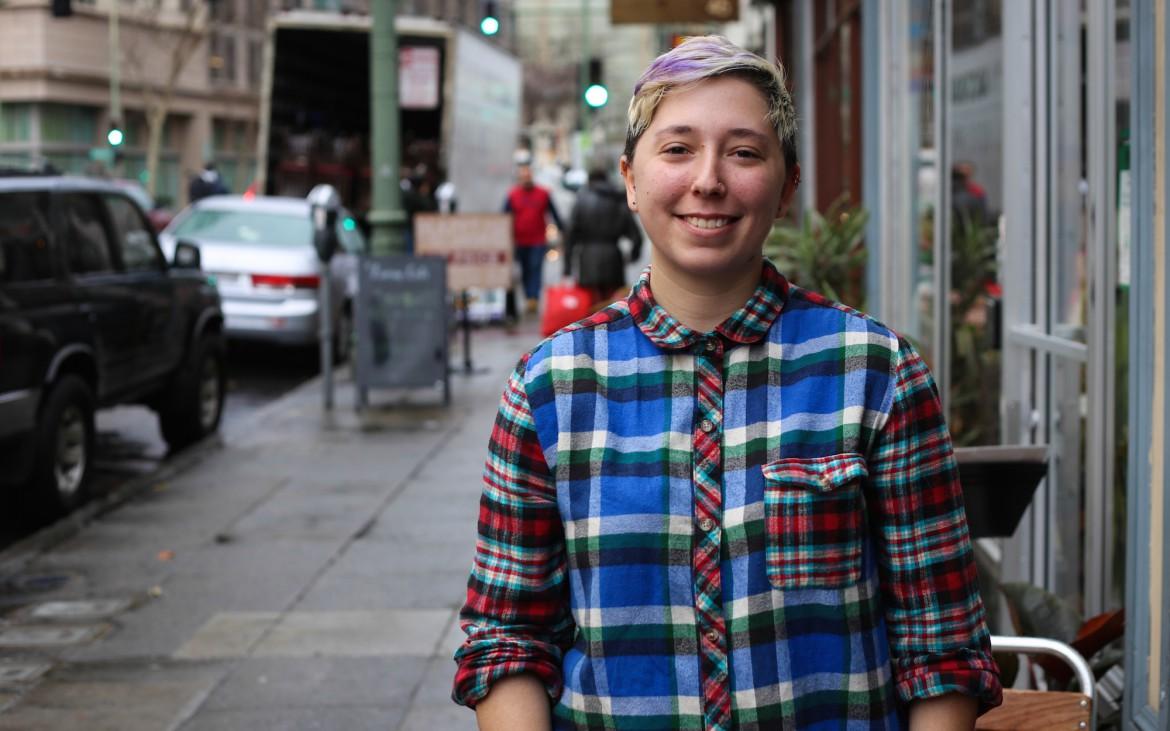 Margaret Miller has been working as a volunteer and site coordinator at Chapter 510, an Oakland literacy and writing project, for the past year. Photo by Kate Nevé

A group of 10th grade students gather in a room at MetWest High School, located in East Oakland. “Independent work time” is in session. Students are huddled together, or off alone in the corner as they work on writing assignments that range from book reports to critical responses. However, due to Chapter 510, no student truly works alone.

The summer prior to Chapter 510’s beginning, Heller said she sensed a vital need for a youth-oriented writing organization in Oakland – something that teaches youth how to empower themselves through writing, providing them with resources, such as experienced writers, to enhance their literary skills.

Heller followed her instincts, rallied up a staff and volunteers, and launched Chapter 510.

In addition to tutoring at MetWest, Chapter 510 offers free creative writing and poetry workshops throughout the year to students, ages 5 to 18.

Heller said Chapter 510 is the most ambitious project she has ever ran.

“I feel a strong sense of satisfaction, people are excited about Chapter 510,” Heller says.

Heller chose the name Chapter 510 because the organization is rooted in Oakland, and is considered a chapter of 826 Valencia, a nonprofit organization in the Mission that offers tutoring and writing workshops to youth ages 6 through 18. The program’s funding comes from private donors and partnerships with other foundations, such as the Oakland Public Library and the Philanthropic Ventures Foundation.

Heller decided to partner with MetWest because she was already involved with the school’s mentoring program. When Heller questioned the school’s staff about what areas needed improvement, they said the ninth graders needed the most assistance with writing.

Volunteer Margaret Miller, a recent graduate of Mills College’s Master of Fine Arts program, tutors twice a week at MetWest. In the large sunlit classroom, Miller walks over to one her favorite groups, three 15-year-old girls, and brainstorms with them, helping them discover what they want to write about for their next response paper. The trio decide to write analytical responses to two articles written by feminist authors Roxane Gay and Clementine Ford.

Miller scans the responses for run-on sentences, removes unnecessary commas, and points out when the student’s voice changes from third person to first person. Her advice is taken with no offense by the students, because after a year of volunteering, Miller is no stranger to the class.

“Janet and Margaret are my two favorite volunteers. I like their attitudes and they’re really encouraging,” says Kayla Keith, a 15-year-old sophomore at MetWest.

Miller said tutoring at MetWest presented her with the opportunity to see MetWest students mature as writers, and as individuals. However, gaining the students’ trust took time and consistency.

“I think those first couple of weeks are the hardest,” she said, recalling her first tutoring experiences, “Because they need to know you and know that you’re actually going to continue to show up.”

Laurie Loftus, 47, began volunteering in the fall of 2014. She compared the moment of waiting for a student to choose a volunteer to a girl waiting for a boy to ask her onto the floor at a high school dance.

“You’re just waiting for someone to pick you, you have to drop your ego at the door and not take anything personally,” Loftus says.

Miller said that the combination of race differences and being a stranger also affected students’ decision to open up and trust her. Standing at 5’2″ with light brown eyes, cropped bleach-blonde hair and a light complexion, Miller is the minority at Metwest. Of the 136 students, half are Latino, 30 percent are African-American, 13 percent are Asian-American, and 7 percent are white.

“Students are typically more scared off or skittish at first because they are like, ‘Are you just doing this because you’re white and feel bad?’” Miller says. “And it’s like, ‘No, I actually really like working with you and I’m doing this out of my free time, but not because I feel sorry for you.”

Kayla Keith said that at first she was hesitant to work with the volunteers. Reaching almost 5’10, with brown, shoulder length hair, light brown skin, and brown almond eyes, Keith felt wary about creating a relationship with Miller.

Yet her decision led to her success. After deciding to open up to Heller and Miller, Keith said that her writing abilities and confidence rose. When it was time to complete the writing portion of the California High School Examination Test, Keith was prepared.

“I was like, ‘Oh my god, I am so thankful I have people other than my teacher to help me get ready for this essay. I was on top of the world because I know I did everything right,” Keith says. “I know how to use commas, I know all of these things, and that was all because of Chapter 510 and working with them for a year and a half.”

According to the Chapter 510 first semester evaluation report, 80 percent of students reported feeling more confident with their writing abilities, and 92 percent reported overall improvement in their school work.

Besides advancing MetWest students’ writing, creating mentor-like relationships between the volunteers and students is another byproduct of Chapter 510.

One of Miller’s favorite moments when volunteering was when she explained reverse racism to two male students.

“They were really frustrated how white police officers treated them and they had an adult tell them at some point that they were being racists, and I thought that was a great moment to talk to them about how there’s no such thing as reverse racism,” said Miller.

Miller concedes to the certain advantages she had as a white woman, and in response to her honesty the students opened up.

“They were just totally blown away by the fact that I was willing to have that conversation and acknowledge my own privilege in front of them, not only as a volunteer but as someone that’s white,” said Miller.

Chapter 510’s next move is to reach out and work with an Oakland middle school, but according to Heller the decision on which middle school is still in the works. Another goal of Chapter 510 is to secure a permanent location with programs such as homework assistance for kids K-12. Until then, Chapter 510 will continue to partner with Oakland schools like MetWest, and offer students academic support and mentor-like relationships.

“It really isn’t about some form of resource like a laptop or scholarship that will make the student do the work or walk through an opportunity. It’s about feeling confident, and that’s what we’re bringing to kids,” Heller says.