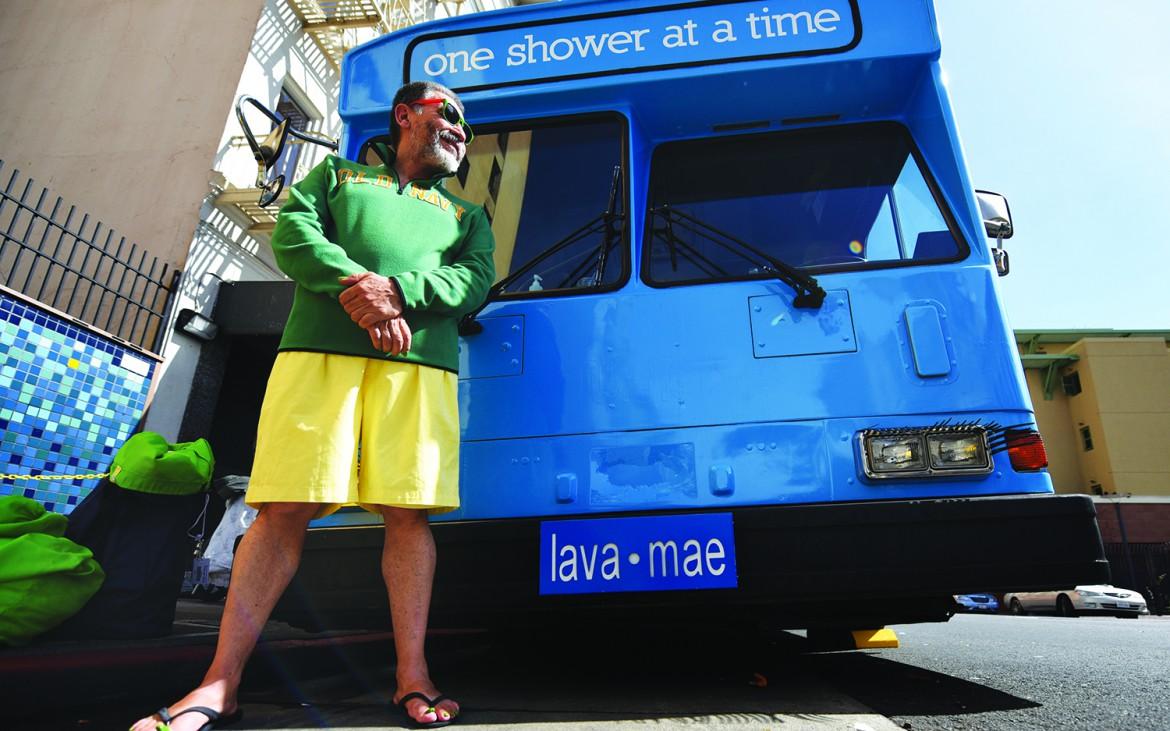 *First names only have been used to protect the identities of the homeless/former homeless individuals interviewed for the story.

Staring out the window into a neighborhood she has seen time and again, the cab driver’s voice wakes her from a daze as he says, “Welcome to the city of broken dreams.”

For the first time, Donice Sandoval sees the city in a different light. She steps out of the cab and encounters a homeless women crying uncontrollably as she tosses and wails, “I’ll never be clean.”

The phrase resonated with Sandoval until she went home to research shower options for the homeless. For years, she had witnessed her neighbors lose their homes, live in their cars, and ultimately end up on the streets. Her research led her to the startling fact that for the 6,436 people living in San Francisco without a home, there were only eight places for them to shower. She knew she had to do something to help the homeless population, but did not know how.

In June 2014, Lava Mae launched with the help from private sectors and local non-profits. Lava Mae converts retired Muni buses to showers on wheels; delivering hygiene to those experiencing homelessness, while giving them the dignity and opportunity they deserve. Their mission is simple; everyone has the right to be clean.

For the man proudly sporting broken green reflective sunglasses, that walks up to ask for a shower, Lava Mae has been a safe haven. “I used to go to MSC South but there were always shootings and stabbings right outside,” John* recalls.

Two years ago, Leah Filler moved to San Francisco from Boston on a whim. She did not know anyone and did not know exactly what drew her to the city. Two weeks later, she stumbled upon an article about a woman who had this crazy idea to put showers and bathrooms on a bus. Like a shadow trailing only a couple feet behind her, the articles kept appearing. What impacted her most was the lack of support from people walking by the homeless on the streets.

“It breaks my heart. People are walking right over them, not even looking at them,” she says.

Knowing she wanted to help, Filler went to meet Sandoval.

To make Lava Mae happen the group of staff and volunteers, who had never worked with homelessness before, recruited help.

The decision to stay mobile was influenced by the food truck scene, explains Sandoval at The Town Hall to End Homelessness. If gourmet food can be delivered on wheels, why can’t showers? The expensive real estate market also discouraged Sandoval from establishing a fixed location, as she had witnessed nonprofits getting evicted and increased rent priced.  Having mobility would give Lava Mae the opportunity to go where the people were.

Early on in the development of the project, Sandoval read about a SFMTA Muni bus upgrade in the San Francisco Chronicle. She made it a point to get her hands on the retired Muni diesel buses being replaced by shiny new hybrids. Through the SFMTA donation program, they were granted a 1992 Gillig Phantom bus, originally used on the N-Judah line. The bus was hauled out to Sacramento where it underwent a $75,000 retrofit to become the first mobile shower unit of its kind.

The transformation equipped the 30-foot long bus with the same plumbing system typically seen inside of a residential house, including a 50-gallon hot water heater. It is sectioned off into two parts, each including it’s own digitally controlled shower, lavatory, and sink.

On a sunny March day the bright blue bus sits on the sidewalk along 344 Ellis St., in San Francisco’s Tenderloin district. A volunteer with a tablet around her neck checks guests into the system. A bin of crisp white towels sits between the two entrances of the bus for easy access. A short line of people, freshly showered or waiting to get clean, are scattered nearby. The bus, connected to a white-top fire hydrant, will provide forty-two temperature control showers for its six-hour day.

Anyone is welcome to use Lava Mae. The organization is partnered with existing non-profits in the area that specialize in homeless services. The guests sign up through the non-profits for their shower, they wait with the organization until their turn, and then they are brought over to check in with Lava Mae. This natural filter system helps regulate the guests and any red flags are addressed before they enter the bus, explains Filler. If someone is experiencing a post traumatic stress disorder flashback, is high on drugs, or intoxicated, it is determined that it is not a good day for them to use the Lava Mae services.

Martin* has been using the services three times a week for the past four months. He walks up dressed in black baggy sweatpants, carrying a large black trash bag for his belongings. He is wearing sandals, exposing his bright green painted toenails. His fingernails and his sunglasses are painted in the same shade of green. Martin excitedly talks about recently submitting applications for dishwasher positions in many Mexican and American restaurants as he waits his turn inside the bus. Fifteen minutes later comes out a whole new man. A smile stretched out from ear to ear brightens up his face, his soul renewed.

“I feel so much better, so refreshed,” he says, in Spanish, about the experience.

After a successful pilot period, Lava Mae is transitioning to be fully operational with three additional mobile shower buses. Once rolled out, Lava Mae will provide a total of 168 showers daily. The team has met with organizations in New York, Honolulu, and South Korea who hope to use Lava Mae’s business model, plans, and support to extend to their own cities.

But providing showers isn’t all Lava Mae is here for. The staff and volunteers are here to provide the moral and emotional support needed by those who need it. “It’s about hanging out and building connections,” says Filler.

“We try to be understanding, rather than following a strict set of rules,” she says about the unpredictable nature of the job.

Although little outreach has been done to attract users, all spots are quickly filled up on any given day. “There is such a great demand and word of mouth travels quickly,” says Filler about the service.

Eric* came to Lava Mae a total mess and miserable, according to Filler. Something about him immediately stood out to her; he was highly articulate. Eric had moved to San Francisco at 18 to study sound engineering, earned two degrees, and landed a job in Seattle. He was married had a daughter. But in a flash, everything spiraled out of control. His daughter was killed in a tragic car accident, his wife picked up a drug addiction, and he was laid off from his job. He spent three years on the streets, alone.

“I kept to myself, people didn’t really mess with me,” Eric recalls. “The worse thing that happened to me was when I was sleeping,” he says as he points to the ground behind him.

“Someone kicked me in the head, threw a rock at me while I was asleep,” he adds with sadness in his eyes.

With the support of Lava Mae in the next six months he was able to get cleaned up, get haircuts, and clothes. But most importantly, he was able to get the moral support and confidence he needed to land a job in research and marketing. He is now off the streets, has a home, and visits the Lava Mae staff during his afternoon lunch breaks. Although being able to reach complete happiness is a difficult process, he says he is getting there.

For most, a shower is just part of their daily routine often disregarded as anything of importance. But to those living on the city streets, a daily shower seems nearly impossible. The United Nations and World Health Organizations define access to sanitation and water as a basic human right.  Although Lava Mae cannot eradicate homelessness, it can provide dignity one shower at a time.