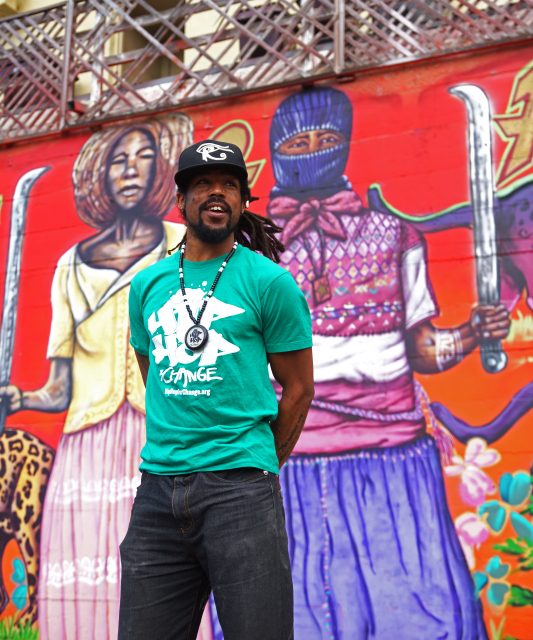 Khafre Jay, the founder and excutive director of Hip Hop for Change, poses for a portrait photo in front of the mural of HipHopForChange Inc. at Oakland, San Francisco, CA. on Tuesday, Sept. 13, 2016. (Perng-chih Huang/Xpress)

He was energetically circling a group of about fifteen people, and from his tone it was more of a chant and call-to-action than it was a question. The group of individuals, called Hip-Hop For Change, was gathered for their weekly meeting at Qilombo, a radical community center located in an Oakland neighborhood that many people unfamiliar with the city would never think to enter. They were voting on an upcoming show they will host this fall featuring hip-hop icon, Rakim. But this was just one of the many things they had to discuss and take business over.

Their goal may appear simple — reclaim hip-hop culture, empower the Black community, and have fun while doing it — but to accomplish it, is anything but.

For many, hip-hop is more than a genre, it is a way of life, a culture that has been firmly embedded in blood and belief, and passed on for generations. Since its infancy, hip-hop has been a reflection of the political and economic landscape of the current times, as well as a mirror to the societal issues and systems of oppression.

Since its humble beginnings in 2013, the Oakland-based nonprofit group has been on a mission to spread a message about self-expression, loving oneself, fighting for your rights, and above all, community. Their message contends with the themes and corporately manufactured narratives within modern-day hip-hop, an agenda that pushes negative messages of misogyny and violence.

Through grassroots organizing, educational programs, and funding performances for local artists focused on conscious lyricism, they are combatting oppression on multiple degrees.

“Why hip-hop?” James, the thirty-four-year-old San Francisco native from Hunters Point, rhetorically questioned. “It’s our culture. It’s just the way we talk, the way we move, the way we dress, it’s our dialect, it’s our dance moves, it’s us. So it has to be the vehicle we use.”

To James, hip-hop is a culture created from what the people wanted, but more so what the people needed. Because hip-hop is commonly understood as being synonymous with the modern understanding of rap music, it is significant to know hip-hop as more than a Spotify playlist and note that traditional hip-hop culture is comprised of four pillars: MC’ing, DJing, b-boying or breakdancing, and graffiti. In its very essence, hip-hop is about the words you speak, the basement beats, the devotion you leave on the dance floor, and the fresh paint on the walls. True hip-hop lives within these four elements, but breathes life through the people that form the community.

James, better known as Khafre Jay, was tired of working for other people, or in his words, “white men with no ties to a community.” He knew he had “hustle” and could organize a community better than they could. In 2013, Jay cashed his last paycheck from the international environmental organization, Greenpeace, and purchased a CD duplicator. He set out to Haight Street, selling his music day after day until it turned into a bigger idea — bringing together a group of like-minded individuals who promote hip-hop with a conscious message, the same way he was.

Jay started Hip-Hop For Change out of desperation for change itself. He sought autonomy from the bureaucracy within the many organizations he had worked for over the years.  He yearned for deeper meanings within the music he loved after being disappointed in what he saw within the music industry. Today, he is a man proud of his accomplishments and humbled by the work ahead.

“The cool thing that I’m able to say is that everything I said was going to happen, has happened,” Jay said sincerely.

For over a decade Jay has become a staple within Bay Area hip-hop and the Oakland community. He considers himself as both a radical activist and a music enthusiast.

“I’m a Blacktivist,” Jay said. “I think in society you can’t separate oppressed art from actual organizing and activism.”

There’s a large chance that if you’ve walked down the streets of Oakland or San Francisco you’ve been approached by a member of Hip-Hop For Change. For Jay, outreach is a main aspect of their work.

“If you haven’t been stopped by us before, then we aren’t doing it right,” Jay teased to a growing crowd as he opened up a local event they hosted called “The Future of Hip-Hop: America’s Newest Indigenous Art.”

Soliciting for donations in neighborhoods across the Bay Area is the essential daily work that keeps their efforts alive. The funds help to subsidize employees, education programs, and events. Although essential, it is certainly not an easy task.

At their weekly meeting a spreadsheet is passed around. Words like “total stops,” “success rate,” “hours on street,” and several other qualifiers span the top of the document while the names of the roughly twenty-five members read down the page. It is the weekly breakdown of the group’s community outreach and an assessment of what each member can improve upon.

A slender black and white cat named Ibu, sprinted across the open floor space as they broke into smaller groups and practiced their canvassing techniques, working to perfect their pitches for the public. Raising not only money, but awareness for their cause, can be strenuous and tedious work. Yet, in doing so it doesn’t fall short of rewarding.

“I feel a little like Robin Hood,” activist and vocalist Desirae Harp said. “I’m taking from the rich and giving to the people who need this money, and it feels good.”

The group hopes that by reaching out to affluent parts of the Bay Area, they will raise funds from those who may live more comfortably than themselves.

Unfortunately, for every rewarding experience there are others that are not so pleasant. Harp, a twenty-nine-year-old Navajo and Mishewal Wappo, has experienced her fair share of these interactions when she approaches people to, “come talk with [her] about fighting racism,” a phrase that many of the members use to engage in conversation.

Some of her most incredulous moments while canvassing include a recent interaction with an unidentified woman from Lafayette, California.

“If you want things to change in the hood, you need to show people in the hood how to make their communities look like ours,” the upset Lafayette woman said. “As long as these kids stay in the hood they will continue to be exposed to violence and they won’t have a chance.”

It was part of a larger statement that rung her dry and filled her with anger. But she needed to be resilient to these affronts.

“At first I was really nervous to reach out to people who didn’t look like me,” Harp admitted. “I’ve had to let go of that insecurity.”

Instead of accepting this idea of assimilation and integration, many in Hip-Hop For Change endorse the idea of self-determination, or the power of a person or community to have authority over their own life. The term was famously emphasized by Malcolm X, who criticized integration and fought for Black nationalism.

“I would like racism to stop, and I would like the power to determine our own life, liberty and our own pursuit of happiness without effect from other communities because of racism,” Jay said.

“He’s the modern Black Panther,” said Jowell St-Cilien, Executive Director at NegusWorld, an international organization dedicated to self-empowerment and global connectivity. St-Cilien and Jay were meeting to view a new promotional music video the two had just shot together.

“He’s completely uncompromised… There is no amount of money that would affect his mission,” St-Cilien continued, referring to the group’s ability to self-finance through the community without accepting government or corporate money.

Their goal of self-determination is part of why the group puts a large emphasis on their education program. It is their hope to pass on the idea of independent thought to younger generations.

Diamond is a self-proclaimed “amateur intellectual,” and in Harp’s opinion a “human encyclopedia.” With over twenty years of experience in working with youth, he has now reached out to more than thirty schools to establish programs and host workshops, as well as assemblies for children from kindergarten to high school and students on through college.

Their workshop is divided into four modules: First they introduce the history and culture of hip-hop, and the following three sections engage students in breakdancing, graffiti, and rapping.

The idea is to, “equip young people with the basic tools to be creators of culture, rather than simply consumers,” Diamond explained.

Harp is not only a canvasser and a devoted indigenous and environmental activist, she is also Diamond’s apprentice and is in the process of creating her own curriculum to bring to the classroom. She hopes to emphasize “breaking down the [systems of] hierarchy”, as well as unveiling mainstream media to the kids in their workshops.

She struggled to put to words the impact they’ve had on the children.

“These kids, they have a voice,” Harp said after a long pause. “The classroom is very different from canvassing. You really have to take control of the conversation when you’re canvassing. When you’re in the classroom you aren’t talking at, you’re learning with these kids.”

Events and Media Director Joseph Penner, known as JP, is proud of their educational program and considers their work both in the classroom and in the public sphere, revolutionary.

“We know that we are affecting kids’ lives so profoundly it’s ridiculous,” Penner said. “We know that for [students in] schools, we are the only time that a lot of these kids have heard anything like this.”

Penner recalls the changes he saw within a young brother and sister hip-hop duo, Tatu Vision from their Berkeley program.

The duo, featuring Jada Carter and Maleik Dion, grew through Hip-Hop For Change’s direction over the years and are now regularly performing at community empowerment events, featuring a conscious rap message.

“They’re on a direction of real success, and Hip-Hop For Change gets to play an instrumental part in that for many different people,” Penner said. “That is very revolutionary.”

By booking and featuring local artists, the group is putting a spotlight on community issues and people that normally may not have a voice.

Another platform Hip-Hop For Change takes charge of is hosting a weekly radio program, from noon to three on Sunday afternoons, at the historic KPOO in San Francisco. The station, established in 1971, is the “oldest Black-owned radio station west of the Mississippi,” Diamond, a regular host for the radio show, said.

“The majority of radio stations make their money just like magazines and newspapers do, from advertisement,” Diamond explained. “Which means that you are automatically restrained with the type of material you can talk about because if you say anything that offends the corporate overlords, they can withdraw their money, which means you have no platform.”

Because KPOO is a nonprofit, community and listener supported radio station, Diamond and the team can speak freely on air about the struggles they face and the music they support. Some of this music being their own rap and collaborations with one another.

At one point in the radio segment, Diamond played tracks from himself, JP, Khafre Jay, and other local artists.

“We are artists and activists regardless of anything else,” Penner said. “It just so happens that we have come together through Hip-Hop For Change, so not only are we creating this platform for others, we have it as well.”

It is a platform they will be using, especially as they prepare to open for Rakim in the coming weeks.