Revival of an experimental art space 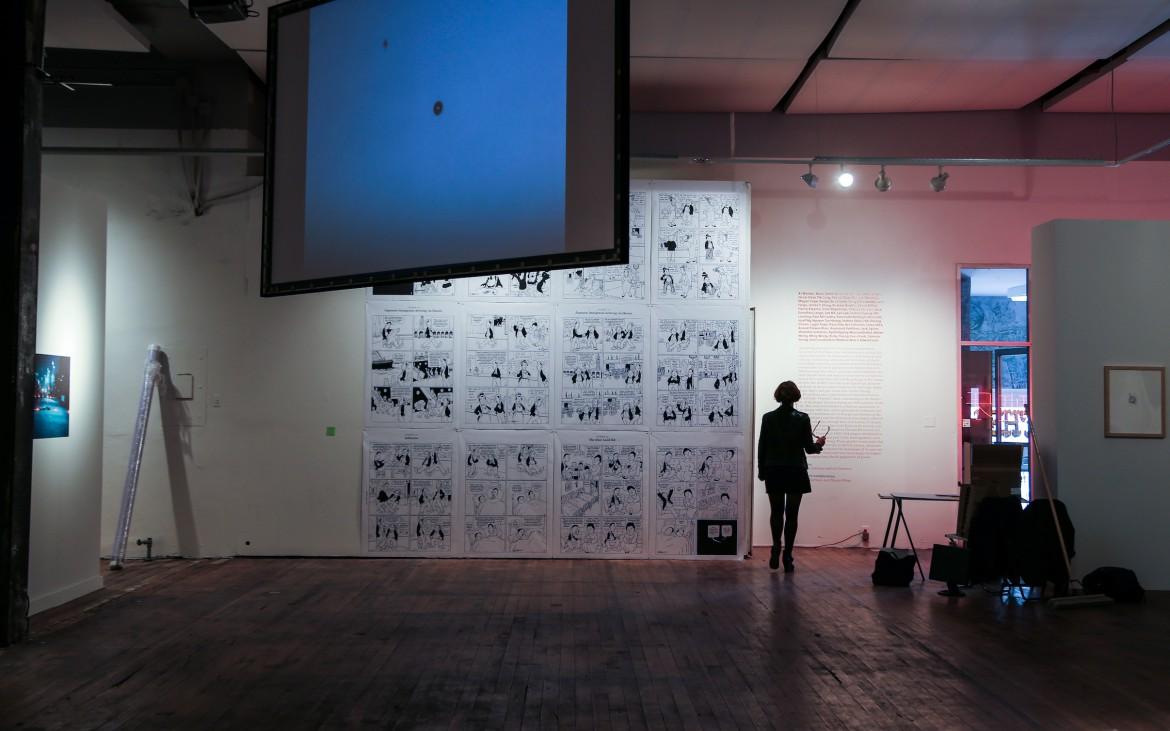 Dena Beard, Executive Director of The Lab, paces through the space in the last hours before the opening of the “A Journal of the Plague Year” exhibition on Wednesday, April 1. (Kate Fraser / Xpress Magazine)

Dena Beard, Executive Director of The Lab, paces through the space in the last hours before the opening of the “A Journal of the Plague Year” exhibition on Wednesday, April 1. (Kate Fraser / Xpress Magazine)

While the San Francisco Arts Commission has continued its program of grant distributions and funding for public projects, like local arts and cultural organizations, their budget has significantly decreased from 2008 to 2013. In relation to budgetary problems, local art organizations and businesses have been hit the hardest. With the bombardment of continuous rent increases, gallery closures, and the many artists who face evictions from their local studios, the art community seems to be suffering.

The SF Art Commission once supported The Lab, a 30-year-old alternative arts non-profit organization that works as a catalyst for art experimentation. The Lab is located at 2948 16th Street in the Redstone Building, formerly named The Labor Temple, which was built by the San Francisco Labor Council in 1914. This space was a meeting place for the city’s organized labor community and was a major focal point for the workers’ social lives. The Council sold the Labor Temple in 1968, and the building has since been home to many local non-profit groups, including The Lab.

The Lab was founded by a group of art students from SF State in 1984. They obtained a lease at 1805/1807 Divisadero Street to use as a collaborative space and to serve as a resource for artists and performers.

“On Divisadero we had a dedicated black-box theater and dedicated gallery, as well as working facilities for artists, including a photo lab, image lab, sound lab, print lab,” says Alan Millar, co-founding member and Board of Directors President of The Lab.

Exhibitions at The Lab had an early focus on solo and two-person shows, instead of group shows, which made a big impact on the careers of emerging artists. The Lab has exhibited work by San Francisco-born visual artist Berry McGee, whose work has been shown at Berkeley Art Museum and internationally, as well as the late San Francisco-based artist Rex Ray, whose work has been shown extensively in the Bay Area, including the San Francisco Museum of Modern Art.

In the last few years The Lab has been under-the-radar in the local art scene. It has been something of a hidden gem, even those who are active in the local arts weren’t generally aware of The Lab’s activities.

“I had been to a few events at The Lab, but knew about it more through folklore and through artists friends’ fond memories,” says San Francisco-based curator and artist Jenny Sharaf.

The Lab successfully raised more than $50,000 through a Kickstarter campaign last November.

Beard’s tasks vary at The Lab. She is in charge of stabilizing finances, creating an up-to-date accounting system, and setting up fiscal procedures. Beard’s plan is to balance the operating and content budget so that they solely focus on activities that The Lab hosts. Facility remodeling was yet another project on Beard’s plate.

“We demolished part of the infrastructure that I felt was aesthetically and conceptually weighing down public perception of The Lab,” says Beard. “It’s former use is what we wanted to return it to. As a public commons where people could renegotiate the ideas of labor, ideas of work, and ideas of play. And think about how we use our time and leisure time creatively to propel us to more interesting directions in our everyday lives.”

One piece of knowledge that Beard brought with her to The Lab was that art can be easily packaged to create a consumable product, something that she doesn’t want with The Lab. When Beard invites artists to The Lab, she asks them to drastically modify the exhibition space into a new way that the viewer can experience art.

San Francisco was once the pioneer of alternative art spaces. From the ‘70s to the ‘90s it was huge.

“You couldn’t walk down the street without running into an alternative art space, and performance spaces were everywhere. We are trying to draw a line around places like The Lab, saying we still need this if you want the city to be any semblance of its former self,” says Beard.

To facilitate growth, Beard has applied for 12 grants from commission programs, totalling in $25,000. These grants would go to three specific artists so that they could support themselves while working for The Lab.

“The Lab’s main and primary goal now is to give artists a living wage,” says Beard.

In a multiplex of tech start-ups and luxury condos that we call San Francisco, The Lab seems to be one of the only great hopes left for artists that live in the city.

“Art has always stood as a light for people. I think we’ve got this niche and edge that has always been there and we want to power that flame more than we have in the past years. And we don’t want to do it in the darkness by ourselves,” says Millar.