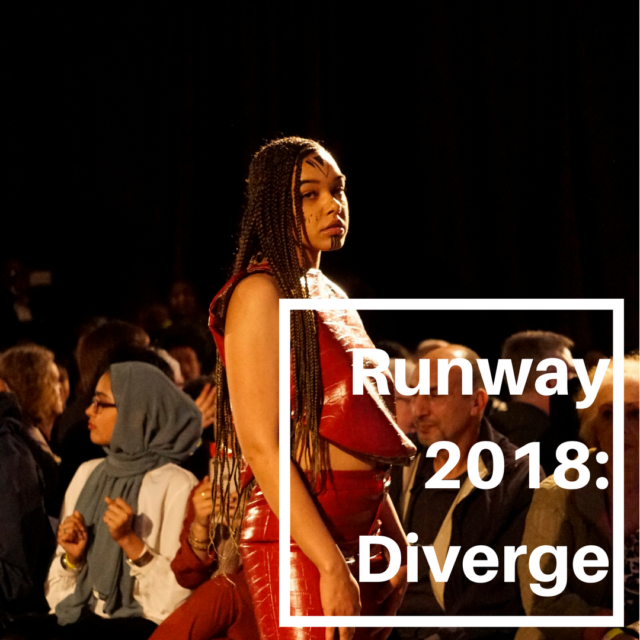 A Path to Inclusive Fashion

It is understood that in the world of fashion there tends to be a standard whose existence is not a true reflection of all types of bodies and people. This standard earns a living of off excluding and making others who don’t quite ‘fit the bill’ feel like they are lesser and not important. Most have gotten used to not being represented and just accept it as a norm or accepted the inevitable struggle of not finding clothes that are actually made for all types of people. This lack of representation causes society to adopt this sort of implicit bias when it comes to what is normal fashion and San Francisco State’s very own Apparel Design and Merchandising department is breaking that barrier with full force.

Runway 2018: Diverge, the fashion show conducted by the Apparel Design and Merchandising department here at San Francisco State was nothing short of inclusive to say the least.

Family, friends, and supporters alike filled the Annex building to the brim Thursday May 10th, to see all of à semesters hard work be brought to life.

“I’m so excited! She’s been worried about this the whole year, now she’s finally doing it and will be at peace after this,” Aiman Khan, sister of senior designer Maryam Khan beamed just before the show. “I’ve been watching the process this whole time, from her sketches, to the final pieces and the mark-ups, and she’s getting a lot of love from our own personal community too.”

The show began with the junior designers who created two looks each. The first was a look suitable for people with various disabilities. There was even an audible description for those in the audience who were visually impaired. For that portion, each model that worked the runway was apart of the disabled community or aà veteran.

“It’s important for people to see the inclusivity of it, but also having optimism on a broader spectrum of having disability groups and showing that we as designers can fulfill them by making garments that adhere to them,” Junior designer, Jonathan Harris began. “It was a challenge but I like a challenge, challenge is good for any designer.”

The second look was to be created out of leftover clothing scraps from the SFSU Bookstore. Although the fabrics were recycled, the looks that were created displayed fresh innovative silhouettes. This promotes the practices and ideals of sustainability, which are becoming more and more prevalent as the conditions of our earth deplete. Incorporating the act of sustainability early on in the careers of these designers is only going to put our future in greatest of hands.

When it was time for the senior designers you could feel the growth of anticipation in the room. All of the collections stunned the crowd with their creativity, as their theme was creating à collection for à diverse population.

“First they come up with their concept, they pitch it to the class, they get critiqued on it, then they begin creating the collection,” explains Professor Amy Dorie who mentored the senior designers from beginning to end.

The entirety of the senior collection was a recipe for magnificence that included a good helping of powerful glimpses into various cultural attires, a dash of time traveling some decades back, a sprinkle of blooming nature, a dollop of adhering to gender neutral and transgender populations, a taste of a music legend, a pinch of some punk rock flavor, with a slice of angelic minimalism. Who could resist?

After a sit down with senior designers Stephanie Schmidt and Aureolus Stetzel weeks before the show, it is very evident that a lot of sacrifices have to be made in order to take on a project of this magnitude.

“It’s a pretty long process, we’re all pretty stressed to be

able to get it done in time,” Stetzel said laughing after the fact.

“It is a lot of work, you do have to sacrifice a lot of your free time. I don’t see my friends as much as I’d like to, I don’t get to spe

nd as much time with my family as I’d like too,” Schmidt lamented. “I’ve definitely spend a lot of time apologizing for being absent in people’s lives for the past year or two especially now.”

The proud faces of family and friends were very prominent when the show was completed, all designers and models came out and made their way to their supporters for photos and praise.

Some of the designers expressed how they felt after the showcase:

“It’s been overwhelming but at the same time it felt right, this is my time and exactly where I need to be in life, and I haven’t felt like that in a long time,” Senior designer Veronica Cecchetti asserted with pure joy.

“I couldn’t stop smiling while watching the models walk down the runway,” said senior designer Deveyn Anderson whilst grinning.

“I felt relieved that it came out the way it did, it came out really good. It proved to me that I could do something like this under pre

This spectacular showcase is simply the designers getting their feet wet. Each have big plans for the future, whether they involve designing or not, as the Apparel Design and Merchandising department allowed them to learn a lot about themselves along the way and provide them the skill set they needed to take the

ir craft in any direction.

Here’s what some of the seniors have planned:

“Next term I’ll be starting my MFA for sustainable fashion design at UC Davis,” Stetzel commented. “I have always wanted to try to help make changes in the fashion industry as far as sustainability goes and labor rights with garment workers and factories in poorer countries where they are completely exploited.”

“I don’t intend to design professionally. I do want to be a buyer, and I think majoring in design would make me an incredible buyer because there are things I will notice with clothing that a merchandiser will not know because they didn’t study it,” Schmidt divulged. “I can tell if someone is overcharging for what

is in their store or if it’s poorly made.”

“I think I might move away from design and go into styling, it’s more my gear but also a bit easier design takes a lot of hard work,” Anderson explains.

“In the future I want to design shoes for women size ten and up and one piece swimsuits for tall people,” Cecchetti decided.

It is suffice to say, the future of fashion lies in great hands.