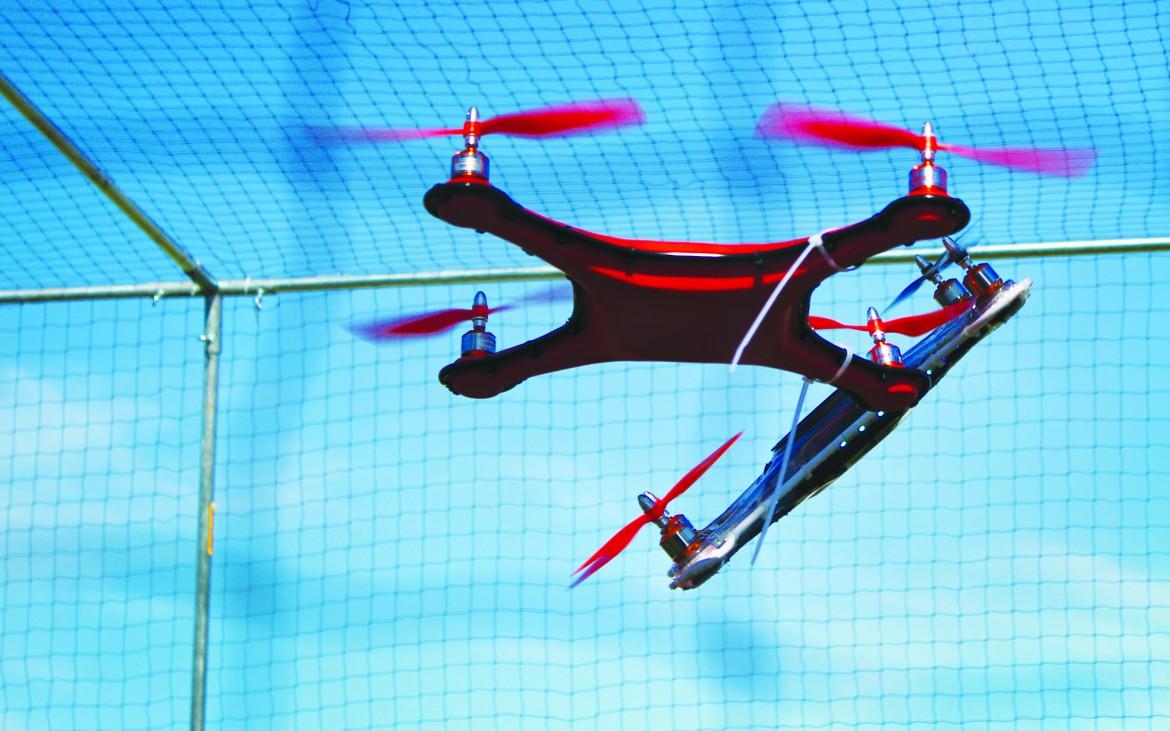 Be sure to check out more of this story in this month’s edition of Xpress Magazine! Photos by Drake Newkirk

Teams of builders, college graduates, and hobbyists gathered to fight each other to the death on a large field at Oakland’s Shoreline Park. They’ve come with knowledge of robotics to commandeer aerial drones to fight, or race, one another in a battle of speed and finesse. Their weapons: flying robots, or drones, are still under review by the Federal Aviation Commission. However, that hasn’t stopped Marque Cornblatt from pitting them against one another to fight in an arena-style tournament he calls Game of Drones.

Cornblatt is an SF State alumnus and co-founder of Game of Drones, an Oakland-based company, which launched a successful Kickstarter, early last year that enabled them to purchase a 3D printer to craft prototype parts for an indestructible drone body. The end product is their Hiro airframe, an impact and fire body that weighs less than a pound.

The Kickstarter, which raised $51,143, was a tremendous success and convinced Cornblatt to launch his hardware company with Eli Delia, also a co-founder.

“I like to call myself a garage engineer,” said Cornblatt, as he reflected on his passion for machinery.

YouTube videos posted by Cornblatt’s production company show him and his colleagues attempting to destroy their drone frame by: shooting it with shotgun shells, savagely beating it with a baseball bat, and attempting to set it on fire.

As a student, Cornblatt studied various degrees of machine art, a deviation from contemporary art forms that focused on bold colors and mechanistic forms. What was initially a hobby, the Kickstarter convinced him that drones can be a viable business.

He and Delia are expected to launch an entire product line related to Game of Drones mid-2015. Until then, they’ve been busy contacting the Federal Aviation Administration regarding regulation as well as filing patents for their products.

Back at Shoreline Park, an audience waits for a drone race to start. Randy Parco regularly attends Game of Drones and brought his family to watch him compete in the races. According to Parco, he learned a lot about drone assembly by watching tutorials on YouTube. Similar to how car enthusiasts would modify their cars to obtain peak performance, these YouTube engineers and hobbyists are altering their drones to obtain a competitive edge. Parco equipped his drone with a first-person camera and GPS stabilizers to assist him during the race.

“People are just geeking out on the technology,” Parco said. “You need to learn how to fly or else your drone will land on the White House Lawn.”

DJI, a Chinese-based company, introduced their Phantom drone to the U.S market, which helped paved the way for a mainstream audience to adopt drone flying as a hobby. Unfortunately, their drone was the same one that crashed on White House grounds in early 2015, where an un-named government employee crashed his Phantom drone in a drunken stupor at 3 a.m. Despite it being illegal to fly a model aircraft or drone in the nation’s capital, the pilot was not charged. DJI responded by issuing a firmware update called the “White House Patch” which limits flights above Washington D.C., according to their press release.

Parco said that the White House incident could have been avoided if the pilot treated the drone with some respect. He added that the drone pilots must be passionate about their vehicles, because passion is a key to proper flying.

Parco brought two of his drones, which he learned to create by watching various YouTube instructional videos, to Shoreline Park. With a front row view of the action, strapped with a Fat Shark brand headset, he raced his camera-equipped drone.

“If you’re really into it, you’re going to fall off your chair,” said Parco.

Tinkering away across the field, Frank Aalbers brought both his racing and fighting drone to the event. Aalbers, who works at Pixar as a technical director, started working with drones only half a year ago, had four of his drones on display on a picnic table. His fighting drone, Metallico, or as he called it “El Metallico”, was set to fight in Game of Drones. The rules for the deathmatch are simple: Two drones enter the arena, last one flying wins, and if both drones crash, the first one back in the air is the victor.

The drone arena, also known as the battlecage, consists of a net barrier that prevents the drones from wildly spinning out after clashing into one another. Aalbers, wearing a black conference shirt tucked underneath a pair of ashen-gray pants, is seen smiling as he enters the cage. His drone is equipped with two fixed metal prongs resembling helicopter blades with the words “protect” sharpied on each. This modification gives Metallico a unique look from the other fighters as it cuts through the air.

However, Metallico did not win its first fight, the metal prongs and parts of its rotor were ripped apart by the opponent. Thomas Jacobson is fighting Aalbers with his drone named Spike, which is decorated with numerous sharp metal prongs protruding from its body. Jacobson uses these spikes to his advantage by hovering over the enemy and quickly impaling them by slamming its body towards the ground.

“He’s 50 years old and he’s acting like a kid again!” screamed Chen, as Aalbers was fighting again in the battlecage, his screams of jolly laughter reverberated through the park.

“Your next pizza, maybe 15 years from now, may be delivered by these guys,” Chen laughed as she discussed the possible impact of drones in the future.

Game of Drones has been featured on numerous news outlets such as Good Morning America and Wired. Cornblatt had no clue that the popularity of Game of Drones would such a spectacle that it would turn out to be. His friend, Edie Sellers, expressed much excitement over the future potential impact of drones.

“This feels like the beginning of the internet,” said Sellers. “It’s like a lemonade stand that exploded! It’s been a hell of a lot of fun.”

According to Sellers, Cornblatt, Delia, and everyone working with Game of Drones, they are searching for ways to cooperate with the FAA in establishing drone safety awareness. Sellers referred to drone regulation as uncharted territory, and factored in the potential impact Game of Drones will have in establishing safety regulations. Coincidentally, the FAA posted updated drone safety guidelines that same day, she noted.

As the sun was setting, Cornblatt and Sellers expressed excitement for next month’s Game of Drones.

“We’re only going to have more spectators every single time!” stated Sellers as she smiled and gazed at the park.

Cornblatt had recently returned from New York to videotape a segment on Good Morning America in which he flew and showcased his drones to millions of viewers across the   country.

“Our next phase is getting investment capital to expand past our initial Kickstarter campaign,” said Cornblatt.

Until then, he and his company will continue facilitating Game of Drones events as well as working with other various drone organizations to build the foundation for proper drone etiquette and regulations.