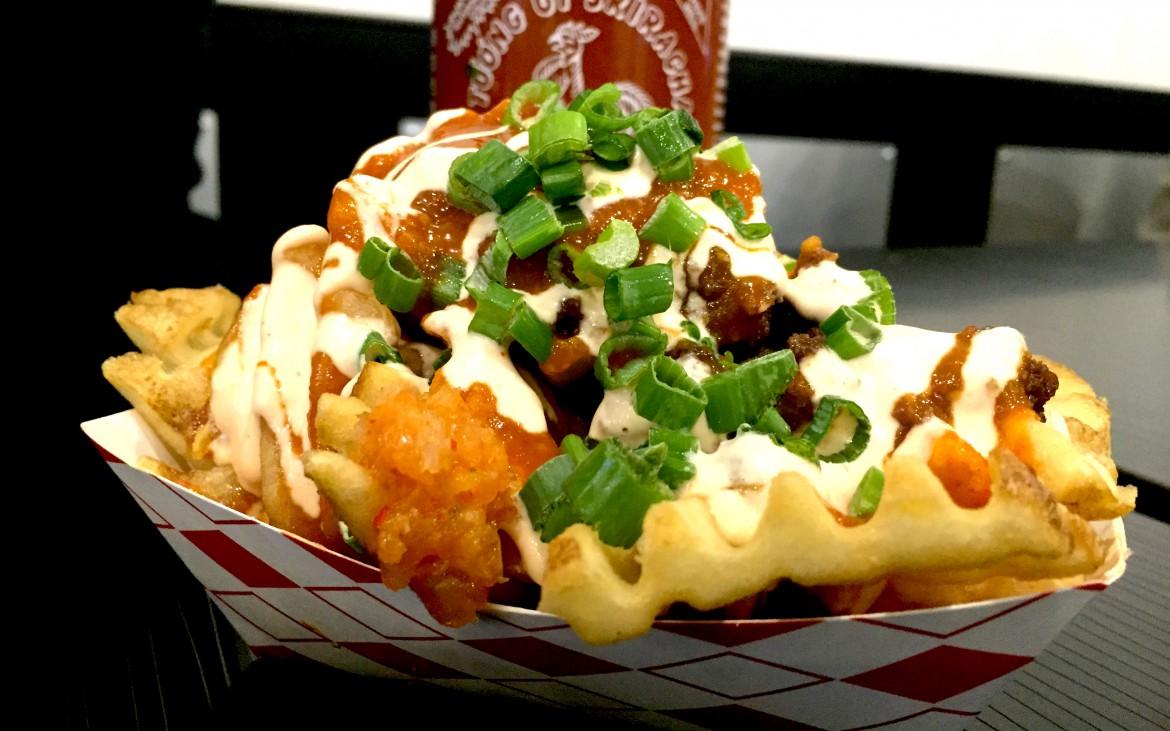 It’s a dangerous situation, taking a bite from its delicate rice buns, hoping it won’t fall apart and spill its generous filling of bulgogi beef. The hand toasted garlic rice buns, which are crisp on the outside, have an overly soft and mushy interior, making it a challenge to eat. Take a bite from the top, and the overloaded burger begins its inevitable crumble, spilling a mixture of Siracha-like sauce and Japanese mayo. Things fall apart, and that’s ok. Sometimes all you need is a fork and napkins.

At Koja Kitchen, Chef Alan Tsai fuses together Korean and Japanese foods with a menu of Korean barbecue burgers, rice bowls and fries topped with seaweed flakes and kimchi.

The popular Asian-fusion restaurant started out as a food truck on the streets of San Francisco back in 2011. Though food truck ventures still happen with the occasional Off the Grid visits, this one found a permanent home in Berkeley two years ago on Telegraph Avenue.

When you enter, you’ll find a siracha bottle sitting on every table. The small space is filled with yellow walls and minimal decor, like flat screens displaying close-up shots of their own food-porn, and a few Japanese-inspired wall scrolls.

Be warned though, there aren’t many seats and most of the space is taken up with lines of customers. But the service here is fast and friendly, so you won’t be waiting anything more than ten minutes.

Their most popular side, kamikaze fries, are basically carne asada fries with an Asian twist. It’s made up of crisp crisscut fries drizzled in a sweet and tangy sauce, garnished with tender bits of slightly spicy kalbi-style beef, kimchi and green onions. Though all of this is delicious and full of umami flavors, the excessive amount of sauces make the fries soft and soggy.

Kamikaze fries could be a meal itself, but if you can’t handle them, there’s a lighter option dressed with spicy red sauce, Japanese mayo and seaweed flakes. The taste is similar to that of takoyaki, a Japanese street food made up octopus balls.

The mini burgers look like light snacks, but they’re actually quite filling. Their chicken koja is sweet and salty, as it’s served with a large caramelized pineapple slice and pieces of sesame vinaigrette lettuce. And their beef koja contains juicy strips of bulgogi in a sweet marinade served with sautéed onions. However, the rice buns aren’t firm enough to hold the meat and fillings together, though there’s a rice bowl option to remedy the messy eating.

The verdict: If you’re looking for a savory meal at an affordable price, Koja Kitchen is open till 9 p.m.