A flying-feather fight on Valentine’s Day 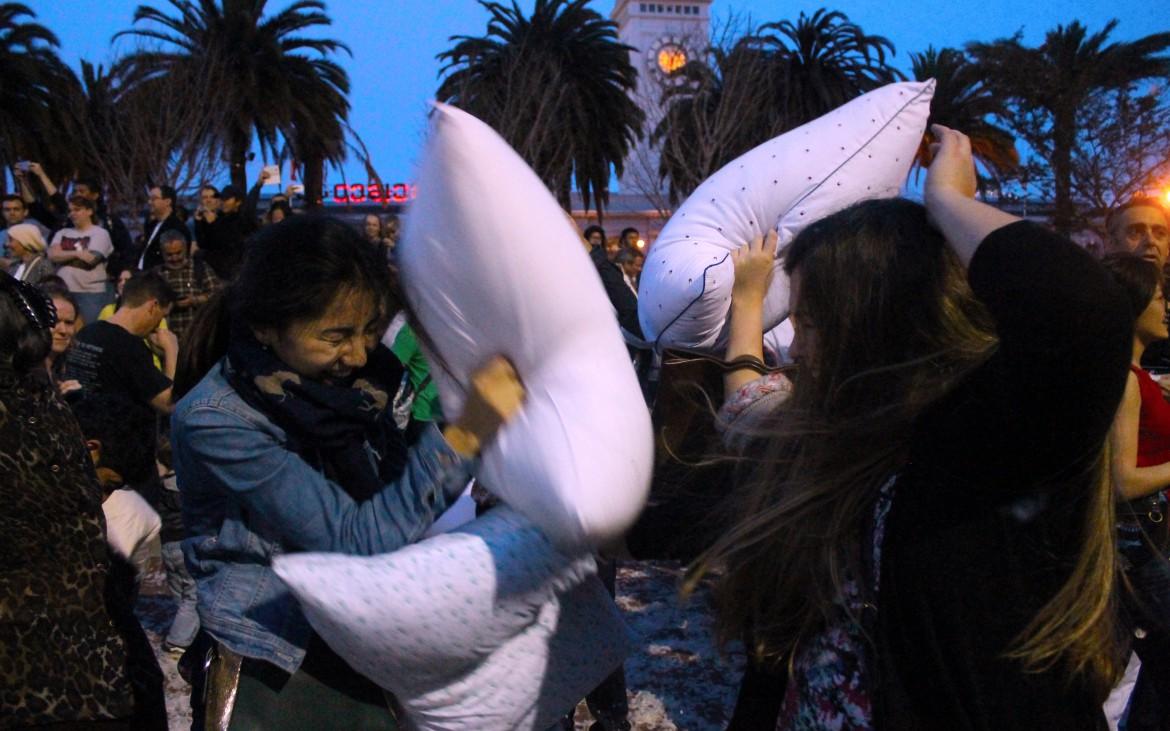 Valentine’s Day is known as “the lovers’ holiday,” but for those who don’t care about red helium balloons and overpriced chocolates the day may also be associated with feathers. On February 14th, Justin Herman Plaza annually turns into a battlefield for the flash-mob-type event, the Pillow Fight.

Officially, it is an arena for lonely hearts on this dreaded holiday, but everybody with a child-like soul will show up and participate in the feathered rain.

“I think Valentine’s Day is stupid and a huge pillow great is great fun!” says 38 year-old Angela Noury. She traveled from Oakland by public transportation to share the cushion- stri

kes with her neighbor, Shanna Lander.

They brought two newly purchased pillows all the way from the East Bay. They even decorated their arms with colored pillowcases.

”We have bought synthetic pillows without feathers – $5 in IKEA,” says Lander and flaps on her pillow. “Then, we can throw them out after the fight and have a cup of coffee.”

None of the women are in a relationship and they don’t expect anything of the pillow fight – or Valentine’s Day.

“Why can’t you give each other roses and balloons any other day?” says Noury. “I think Valentine’s Day is a stupid, consumerism tradition like many others in the U.S. It is a waste of money.”

A waste of money

And that is exactly what Jermie Brown, 34, also thinks about this day of love. He sits slightly away from his neighbors on a grey concrete block just in front of Justin Herman Plaza where the battle is fought. In his hand he has a faded and tired pillow.

“I don’t understand why people would buy a pillow for a pillow fight. The whole idea is to destroy your pillow! I got an old pillow, right!” he says.

Like his two neighbors, this is the first time he is going to experience the pillow fight even though he has seen it on television for years.

“And I always say to myself – I’ve should have went!” says Jermie Brown who came all the way from Walnut Creek. “This time I actually had the opportunity to go because my wife and my son are away – so what else to do? I just want to have fun on my own and it looks like it is going to be fun.”

His expectation: feathers everywhere and people just getting hit.

“And that sounds like an ultimate party,” says Brown, who has some white earphones on his lap. “All they need is a DJ here! I got some music, hopefully that works. Kind of bad I don’t have a go-pro attached to me somewhere so I can tag people on Facebook just saying: Hi, that’s you getting hit!”

Normally he doesn’t celebrate Valentine’s Day, even though he says he did when he was younger.

“But then after a while I just kind of like have seen through it. I don’t see the purpose in Valentine’s Day,” he says and explains that it is kind of like New Years.

“Everywhere you go you get overcharged – at the dinner as well as the club – but if you do it the day before… then it is regular price,” says Brown. “The day after… it is regular price! So they’ll raise the price because they know people actually are going to spend that money.”

“You can buy roses any day and they probably be cheaper too.”

No feathers, no pillow fight

Brown anxiously waits for the Embarcadero bell tower to ring at 5:45 p.m. when the pillow fight will officially start, just like everyone else gathered for the event.

One of them is 22-year-old Thomas Bartling, who is joining the pillow fight with his mother and little sister from San Diego.

“I am single and I really want to beat crap out of other single people,” says Bartling, who has been to the fight before.

“Last year was crazy,” says Bartling. “You just can’t stay here past 8 o’clock ’cause then drunk people come and… fill their pillows with stuff in it, rocks for example – and that makes it dangerous for other people. So you have to be careful.”

The family bought new pillows, stuffed with feathers. Soon, the feathers will be whirled around in the air until people can’t breath.

“It wouldn’t be a pillow fight if there were no feathers,” Bartling says and then explains his tactic.

“Find your target, hit it a couple of times, run away, move to your next target. Don’t give them the opportunity to hit you in the back,” he says, smiling.

The pillow fight starts promptly at 5:45 p.m. when the Embarcadero tower clock dings. Old and young, skinny and fat, black and white – people with masks, go-pro-cameras and rainbow-colored pillows run toward each other with pillows raised. In a matter of minutes, they pummel each other until white feathers fill the evening darkness.

In the dim light from the lamp posts, it almost looks like snow.